Many people within and outside Korea find that it is a conservative country. The majority of Korean people can identify themselves as atheist, Christian, or Buddhist. Without a doubt, one can feel and experience the Buddhist influence in Korea. Although I am not Buddhist, I still am able to enjoy the architecture of the many temples that can be found around Seoul.  Another way that I enjoy experiencing the Buddhist culture while teaching in Korea is through their various holidays and celebrations such as Buddha's birthday. 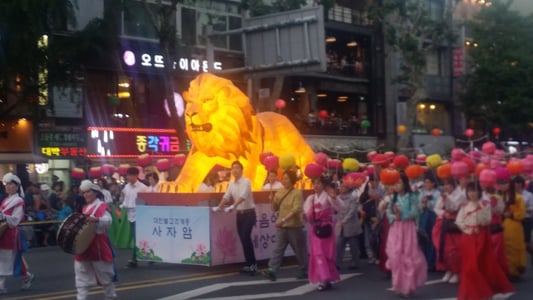 Every year, one of the major holidays celebrated here in Korea is Buddha’s birthday. Although there are many different Buddhist holidays, Buddha's birthday is considered to be the most important. Over the past two weeks, believers and non-believers alike have been able to take part in the festivities associated with Buddha’s Birthday. The first major celebration was held a weekend before Buddha’s actual birthday celebration (May 25). Located in central Seoul, people of all natures came to watch the Lotus Lantern Festival that went from Dongdaemun to Jogyesa Temple in Jongno. This area of Seoul is quite busy so to see it closed down for a few hours was an unfamiliar yet eerie sight. Still, numerous tour groups from all over Korea came and reserved seats along the parade line. 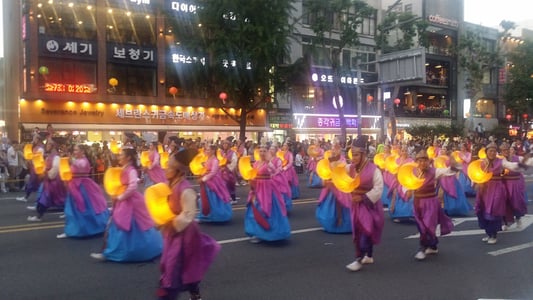 If you do plan to come to Korea during this holiday season and want to find good seats, you may want to try and register yourself with the Korea Tourism Organization. Many foreigners had badges that would let them either have special seating or be part of the parade. Since we found out after the fact we watched near Insadong (in between Jongno and Dongdaemunl) where there are many 3-4 story cafes. It is best if you get there early and pick seats from up above so that you can get an outstanding view. If you get hungry during the parade, you can go to the McDonald’s near Insadong and get a good view from there. 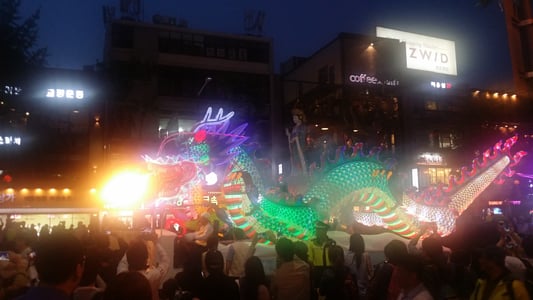 One of my favorite spots in Seoul is Cheonggyecheon Stream where many visitors and couples come to take pictures with the numerous floats. Many of the lanterns will also end up floating here lit up while some others may be lifted up to the sky. Each year, the festival can bring close to over 1 million people, so it is best to pick the best times to look at the different lanterns and floats. I advise you to try to avoid this area from 6PM-10PM on the weekends because there are so many people and your claustrophobia may kick in. Once you are down next to the stream, you will basically have to walk the full length of the festival to get out. When I have gone, it has been strictly enforced to not turn around and go back to the entrance.

If you really want to immerse yourself in the Buddhist culture, there are numerous overnight temple stays in Korea that let you live like a Buddhist monk. There are a few tour groups that arrange accommodations like this for foreigners. Visitors will be able to eat traditional Buddhist monk cuisine (remember to eat everything that you take), pray in the early morning, and take hikes deep into the mountain so that you can reach nirvana  and be one with nature.

Buddha’s Birthday celebration is one of the most colorful events in all of Seoul and is one of the best ways to experience a new culture while you are teaching in Korea.