Celebrating My First Lunar New Year While Teaching in Korea

Korean New Year, also known as Seollal or Lunar New Year, occurred this past week! It was celebrated from Sunday, February 7th to Wednesday, February 10th, departing from the year of the ram and entering the year of the monkey. People associate the year of the monkey with joyfulness, playfulness and some consider it the year of the fool. Lunar New Year falls on day of the second moon after winter solstice. It is one of the most significant traditional Korean holidays. All citizens get time off work, or school to be with family, enjoy tteokguk (a traditional rice cake soup enjoyed especially at Lunar New Year) and honor past ancestors. More recently, Korean’s have used the holiday to travel to distant family, so it is often the most expensive time of the year to book any form of transportation.

This was my first time celebrating the Lunar new year while teaching in Korea, and it was also the first time I have celebrated a new year other than on January 1st! It was a great experience! My whole ChungDahm branch received 3 days holiday! Gift giving is a very typical part of Lunar New Year, so our branch gifted all the employees with wine. I exchanged some gifts with my Korean co-teacher and head instructor in the April department as well. Everyone was in high spirits to have a holiday. 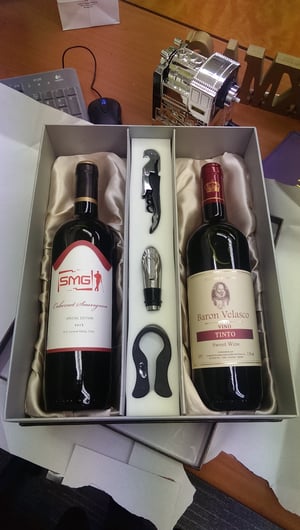 Wine gift set from our branch

New Year gifts to my co-teacher and head instructor

On the first day of Lunar New Year, some co-workers and I got the chance to attend a traditional Korean performance at the Busan Cultural Center. It consisted of traditional singing, and dancing while wearing traditional Korean hanbok. Hanbok is a type of formal wear that was often worn by rulers or aristocrats throughout Korean history, but now it  is more commonly worn to festivals and on special holidays. Hanbok is very colorful and typically consists of a blouse shirt and wrap-around skirt, while men also wear loose pants underneath the skirt. The performance included an amazing orchestra which was composed of traditional Korean instruments such as the gayageum a plucked string instrument, the daegeum, a large bamboo flute, and the nabal which is a long brass horn. My favorite part of the performance was the drumming. The drum has been a very significant instrument throughout Korean history, and this performance certainly highlighted its influence. The typical Korean drum is called a buk, and it can be both stationary and held in hand. The drumming throughout the performance was amazing and completely captivated the audience. It was something I will never forget. 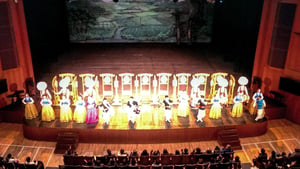 Drummers dress is hanbok at the Busan Cultural Center 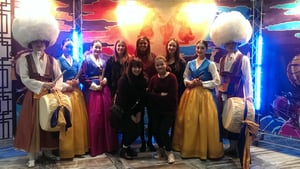 Coworkers and I with some performers after the show
Although travel was difficult, I was also able to visit Geoje Island during Lunar New Year. Geoje is South Korea’s second largest island after Jeju Island. To get to Geoje from Busanyou must cross the Geoja bridge and pass through the underwater tunnel. At its maximum deepness the tunnel is 48m underwater, and upon its completion was the world’s deepest immersed roadway tunnel, but unfortunately only accessible by car or bus. On Geoje I got to visit some popular tourist attractions such as the Hill of Wind, a popular place for picture taking despite the title, and the Historic Park of Geoje P.O.W Camp. This camp was where North Koreans, Communists and Chinese were sent during the Korean War. 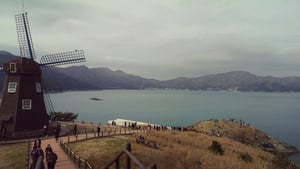 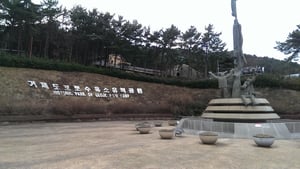 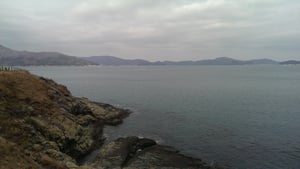 Geoje Isand
Finally, on the last day of my holiday I got to explore a historical, cultural center right here in Busan. The Bosu-dong Book Street is a historic site in Busan because of its significance during the war. It was formed in a previously demolished area by refugees who came to the area to sell their books for a living. Professors and teachers began coming and buying their books from the area, which greatly contributed to the city’s decimated economy. This book exchange eventually was the cause for some infrastructure to be built, and it became the center it is now. The Bosu-dong book street is still considered a famous book selling area and historic site in Korean history. 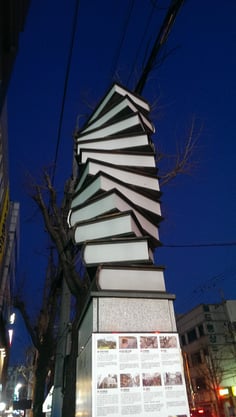 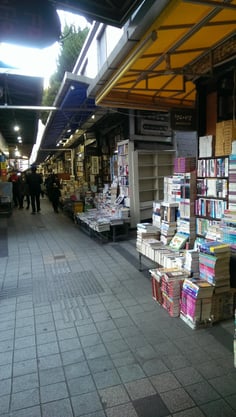 Bosu-dong Book Street
My first Seollal was a great time to learn more about Korean traditions, culture and history. I look forward to more Lunar New Years in the future, and anticipate great things in the year of the monkey. 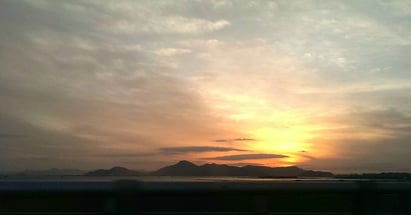