Celebrating Spring in Korea: From Strawberry Picking to the Holi Hai Festival

Spring has finally arrived in Korea and with that comes the opportunity to try some fun outdoor activities.  This blog will focus on a recent weekend trip I just had where I got to partake in many popular springtime activities in Korea.  I had a blast doing all these activities and I highly recommend you do them as well during your time teaching in Korea.

This past weekend I signed myself up for a weekend trip with WinK (When In Korea), a tour company that organizes trips throughout Korea. My friends and I had traveled to Hwacheon for the Ice Fishing Festival on a tour operated by WinK, and had a pleasant experience, so when we heard about the Cherry Blossom trip we were excited to sign up. The trip was around ₩110,000 which included transportation, some food, festival entries, and our second night accommodations. 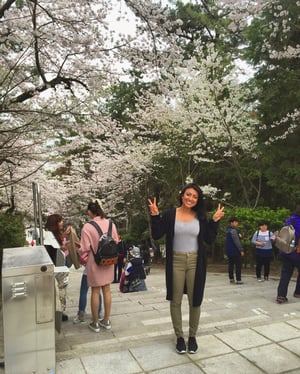 After work on Friday night I headed to Seoul National University of Education to catch the bus to Daejeon where we would stay the first night in a Jimjilbang, a Korean overnight spa. Now, I have had several JJB experiences before, but this one was definitely one of the worst. Due to the size of our tour, the Jimjilbang sleeping area was packed, and I mean packed. It was difficult for us to find a decently sized area to sleep, and every room that wasn't a sauna was full. I wound up on a mat in a brightly lit room for the majority of the night between two men who could probably move mountains with their snoring. Not exactly pleasant. At the minimum, the whole experience was rather amusing and our group was bonded by our mutual irritation. By the time 6 AM rolled around, I gave up on sleep and decided to indulge myself in the bath house and some breakfast. 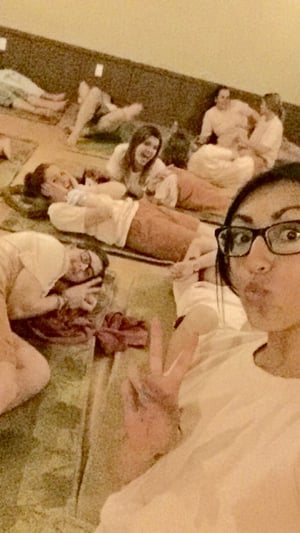 Our bus departed bright and early for the organic strawberry farm where we were given the chance to fill up a basket and eat as many strawberries as we liked. The greenhouse was well kept, and our group was pretty amazed at how perfect the strawberries were and how sweet they tasted. Seriously awesome... my belly hurt after from how many strawberries I ate. There was also some strawberry jam with little crackers available to try which were also pretty delicious. 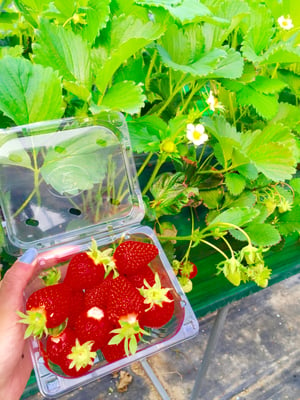 After the strawberry picking we got back on the bus, this time headed to Jinhae, a town in South Eastern Korea famous for it's annual cherry blossom festival. Before coming to Korea I remember seeing stunning pictures of beautiful white and pastel pink blossoms and being so excited to go and see them. I was surprised to discover that the blossoms only last about a week or so. This made me determined to see as many of them as possible. The Jinhae cherry blossom festival is the biggest in Korea, and it was definitely felt busy. There were endless food tents, performances, and a lookout tower which we headed up to check out the view of the blossoms from above. There were SO many people around- (you can imagine all the selfie sticks) so we had some fun photo-bombing and took lots of pictures ourselves. 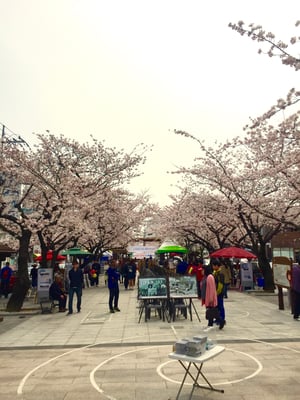 After reading more about the cherry blossoms, I learned that although the origin of the trees is unknown, it is speculated that they originated somewhere in Eurasia around the Himalaya's and immigrated to Japan several thousand years ago. Due to hybridization, more than 300 varieties of the cherry blossom trees exist. The cherry blossoms symbolize many different things in various cultures. They are said to represent a woman's beauty, the beginning of stages of life, but are mostly a visual reminder of how short and fragile life is. It's easy to marvel at their beauty and it's even more precious since they come and go so quickly. 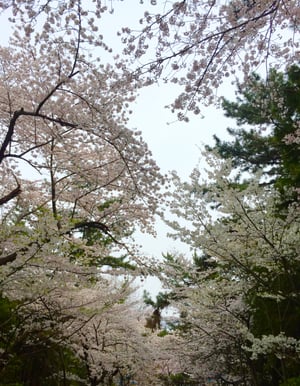 There were a lot of delicious street eats available, and I helped myself to a variety of fishcakes on a stick. There were also fish shape desserts that I've been wanting to try for a while. There were two options- red bean and apple, the latter of which I opted for. It tasted a lot like an apple strudel. We also got disturbingly sweet cherry blossom and regular lime/mint "mojito's," which several of my friends enhanced with soju. Definitely refreshing! I've come to realize that any sort of festival event in Korea is foodie heaven.

After the cherry blossom festival we headed to Busan- Korea's second largest port city, where we would spend the night at a motel before Holi Hai the next morning. After sorting out our lodging and freshening up, we had a barbecue dinner and drinks on the beach. I really loved Busan- it had a coastal relaxed feel which I really appreciated. I decided that if I had to live anywhere else in Korea I would like to live in Busan. My friends and I ended up sitting in a bar by the beach and sipping sangria... the good life! 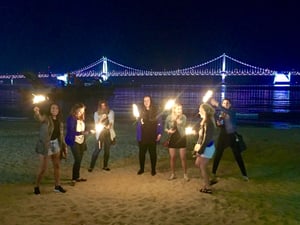 After another short sleep thanks to late night bar hopping, we woke up, thew on some white clothing and got on the bus for Haeundae Beach, where the Holi Hai event was to take place. I was definitely pretty exhausted at this point, but the energy at Holi Hai was contagious. Holi Hai aka the Festival of Colors is a Hindu spring festival in India, where everyone gathers on the beach with paint, and after a countdown attacks one another with paint and water until everyone resembles a 70's tie-dye shirt. Busan holds it's own version each year, which encourages everyone regardless of ethnicity to come together and celebrate the beginning of summer. After we painted our faces we got into the crowd for the countdown which was intense and energizing. 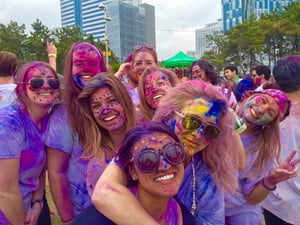 The ambassador of India was present and even made a little welcoming speech. It was super fun attacking one another, and strangers with powdered dye as well as dancing along to the Bollywood tunes. By the end of the festival we looked seriously strange, but it was well worth it! We even snuck on stage for a quick dance and picture. 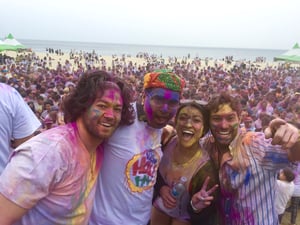 Post Holi Hai we grabbed a quick bite and loaded up on snacks in anticipation of the long bus ride home. Our entire group was fairly exhausted and I snoozed pretty much the entire time! If memory serves me we arrived back in Seoul around 8:30 PM, most of us still slightly colorful. I'm sure I got some double takes on the subway ride back to Gangseo!

All together we had a really great jam-packed weekend. I would definitely recommend the Jinhae cherry blossom festival as a "must-do," when celebrating spring in Korea!