Naturally, I have straight black hair that turns reddish brown during the summer. My mom was so kind as to let me grow up experimenting with those orangey copper highlights every kid on the Disney Channel had in the early 2000s. Trust me, I’ve always been experimental with my hair from a young age, especially after getting a horrible haircut that looked like I put my head into a pencil sharpener when I was twelve. After that incident, I taught myself how to cut my own hair and proceeded to not let anyone else touch it for five years. As I’ve grown up, I’ve had long ombred hair, a blunt black bob, highlights for days, and many a box-dye from spontaneous trips to CVS.

When I moved to Seoul, I was fascinated by the notion of self-expression as of the utmost importance. People of all genders presenting themselves in colors and styles that proved them shapeshifters, especially the idols who would have an amber pixie cut one day and long purple mermaid locks the next. I’d see people wear chunky orange flatform sandals and parade around Hongdae in metallic gold baggy dresses. Couples would wear matching outfits on dates to the park. And  by matching, I don’t mean simply coordinating. I’d see partners wear the exact same tops, pants, shoes, AND accessories. I would normally be unsettled by this in the US, but seeing shared expression like that in a context outside my own only catalyzed my desire to become more myself through experimentation. 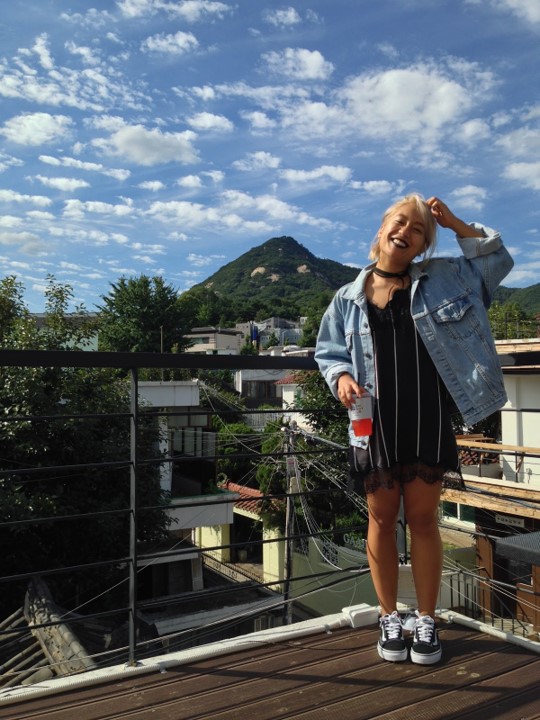 I had always been curious about being blonde but never thought I would be able to do it myself. Asian hair is infamously heavily pigmented and much harder for bleach to penetrate the shaft, which can lead to a lot of brassy yellowish tones that you see on many an idol wannabe. But I knew if I were to do it anywhere in the world, it would be Seoul. I asked my branch manager first if it would be okay since although blonde is a natural hair color, it’s definitely not one anywhere close to mine. He graciously agreed and I got the ball rolling on the hard part - figuring out where to get it done. My best friend, who is native Korean, took me for a consultation in a salon in the heart of Hongdae. I was so excited to start the process, not the least bit nervous. But when they observed my hair, they told me the chances were slim because it wasn’t completely virgin, meaning undyed and unprocessed. They were adamantly against it and told me my hair would turn into naengmyeon, which are squiggly buckwheat noodles in cold broth, eaten in the summer. But I had done my fair share of research, and the ever trustworthy internet told me my hair would be fine for the journey into blonde.

So I did more googling and stumbled upon a list of suggested salons, created by another teacher in Korea. These blogs really do save lives! I decided on going to Soonsiki salon in Hapjeong. There is also one on Hongdae, but I wanted to go to Hapjeong because it’s bigger and in a quieter area, or as quiet that neighborhood can be. I simply walked in without an appointment for a consultation, and the owner of the salon brought me immediately to Yura, one of the stylists there. The amazing part was how willing they were to accommodateacommodate me with limited English, as this was a Korean salon. Since I couldn’t speak, Yura stayed on the phone with my best friend and did the whole discussion process in Korean, ultimately telling me that my hair was more than good enough and they were very capable of the job. I walked out with an appointment for the following weekend and couldn’t be more excited. 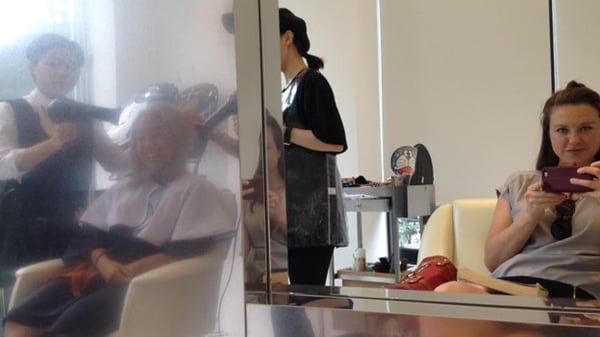 The week leading up to my appointment I deep conditioned my hair every other day, and stopped shampooing my hair three days beforehand. This is crucial as you want your hair and scalp to build up a layer of oil to protect from the bleach damage. The night before, I soaked my head in coconut oil and walked into the salon bright and early at 9 am on a Saturday. The staff greeted me with hot tea and specially made assortments of nuts and cookies, and got to work. The salon itself is very beautiful, spacious and modern with a view of the bustling city below and a killer soundtrack playing through the space. The best part is that the work area is one long communal table, so you can see all the transformations of the other clients, and also bring guests who can sit with you. I went with a friend and they also continually offered her tea and treats, giving us magazines, helping charge our phones, and ensuring we were both comfortable. Yura told me that the process would be very long, so she and the staff even made me waffles so it would be more bearable! She and her assistant put in the first round of bleach in my hair for fifty minutes, painting my locks at the speed of light. They put me under a heater, washed my hair, then put in a second round of bleach. I’ve read horror stories of how painful the bleach is on the scalp, and it was indeed a lot to handle. But Yura and her staff always kept company, made sure I had a beverage, and kept me in the loop about the process. 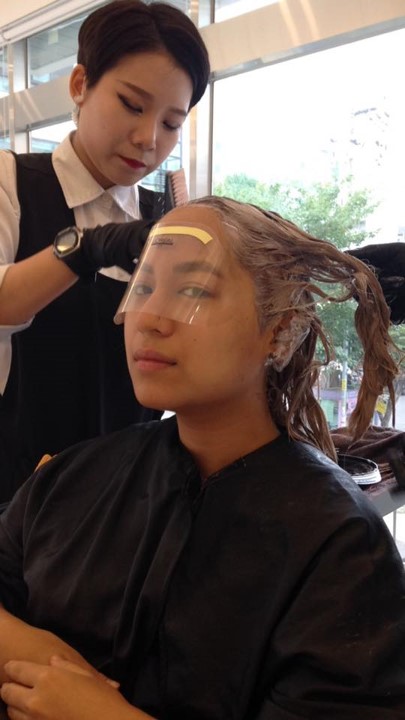 I was deeply impressed by the care they gave me, especially in terms of the time frame it would take to get to blonde. Because multiple rounds of bleach shock the hair, Yura suggested that instead of giving it a go and getting the color in one day, I should rest for a few days before the final rounds of color. So I walked out of the salon on Saturday afternoon with a head looking like egg yolk, and dunked myself in coconut oil yet again. I came back the following Wednesday and Yura did one more round of bleach and then toned the color to an ashy blonde. She even gave me a free haircut and keratin treatment to heal from the dye. When I saw my hair in the mirror, I was amazed. She managed to turn my incredibly dark locks into something that made me feel like an anime character in the best way.  She and the owner of the salon gifted me amazing repairing and hydrating products to maintain my hair’s health. I felt like a whole new person, right at home in the experimental and creative culture in the city. 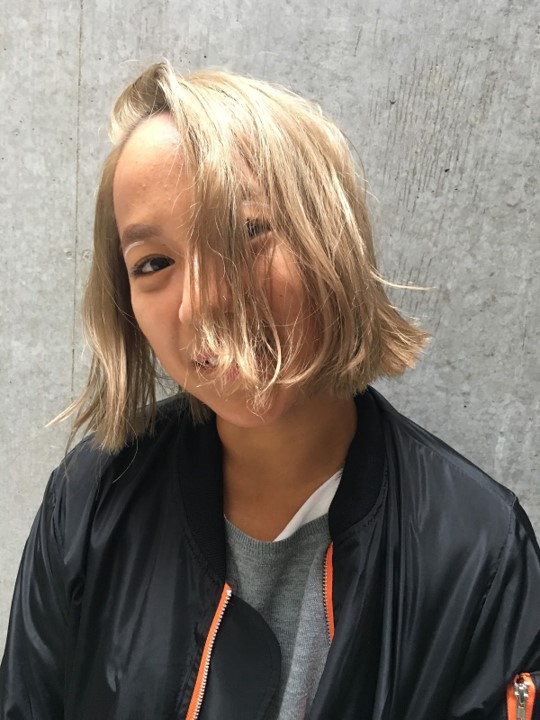 I even came back to Yura to dye my hair again after traveling for six months. She welcomed me back with the warmest smile and enthusiasm. We chatted in broken English and Korean about how life had been, took some selfies of course, and she wished me well on my move back to the US. The whole process of becoming blonde in Seoul taught me a lot about the value of self-expression, confidence, and having the guts to not take things so seriously. But what I liked even more was the love I felt from the people at the salon. Although it sounds silly, I found a community there, exemplifying the fact that Korean people are not only immensely talented and hardworking, but have big hearts wherever they are. When I move back to Seoul in a month, I know exactly where I’m going to go for not just amazing hair, but for time with dear friends. 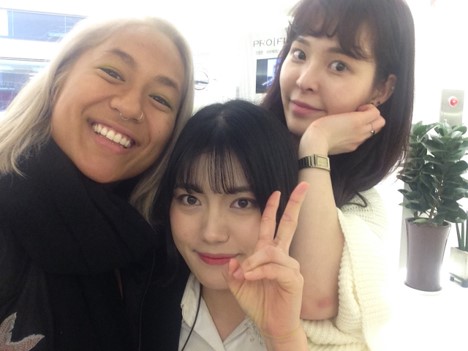