Teaching English in South Korea certainly is an attractive option for many, and the motivations for doing so vary widely. Obviously the chance to experience a new culture was a strong draw for me, coupled with the glaring and troubling realization that I was not totally sure of what I wanted to do with the rest of my life. But another large part of the appeal of this profession was the opportunity to save significant amounts of money. Now, there are varying degrees of frugality that you can strive for, and personally I would put myself somewhere in the middle of the savings spectrum. I do not make many extravagant or expensive purchases (some of my friends jokingly call me a tightwad), but at the same time I am a big lover of food and drink, so I like to eat out with friends pretty regularly. Whether you are a dedicated worshiper at the alter of penny pinching, or simply a person who likes to save a few bucks here and there, one of your strongest allies in the fight for a bigger bank account is Daiso. 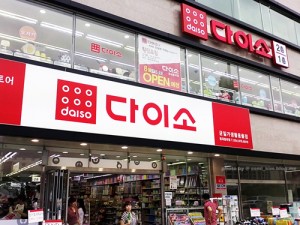 Daiso is one of my favorite stores in this country, and is essentially the Dollar Store of South Korea. It is a Japanese owned company, so of course I revel in alerting my patriotic students to this fact, which they often adamantly refuse to believe. Luckily for yours truly, the Daiso in my neighborhood is right across the street from my apartment, which is quite convenient. In my first weeks in Daejeon when I was trying to make my apartment somewhat livable, I was constantly making the arduous thirty-second trip. Since it is so close, I still find myself venturing in there quite often, even if I have no specific purchase in mind. It does not have the impressive selection of Home Plus or the overwhelming scale of Costco, but Daiso makes up for it with some of the best bargains around. 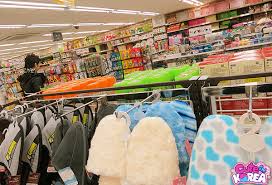 So unless you are on a steady diet of ramen and candy bars, then Daiso is probably not where you will be stocking up on your food. But for most other necessities, it is a safe bet that Daiso will probably have you covered, and at a great price to boot. I am by no means a gourmet chef, so I do not need super high-quality kitchen supplies, and that is why I head to Daiso. Instead of dropping 25,000 won on a Homeplus pan, I will gladly shell out 5,000 won for a cheaper Daiso version. Is it necessarily the most durable pan in the world? Considering my first pan’s handle broke off within two months of purchase, I would have to answer with a resounding no. But overall I would argue it is still the better value in the long run. Daiso also has large drinking glasses, which may seem like a very normal thing, but in the country of frustratingly small drinking vessels, that is a godsend. 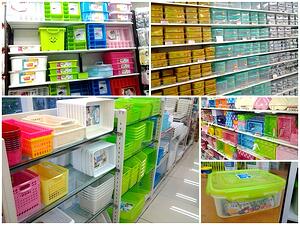 As a teacher, you go through a lot of tape and paper and materials of that nature. My students in particular go through tape and colored pencils and crayons at an astounding rate, meaning I am in that section of Daiso quite frequently. It is by no means the Korean version of Hobby Lobby, but it definitely gets the job done as far as I’m concerned. So if you are looking to save some money during your time teaching and living in Korea, I highly recommend heading over to your nearest Daiso to do some shopping.