Dining Your Way Through Hong Kong While Teaching English in Korea

In my third and final installment of my hard-hitting blog series on my magical Chinese Lunar New Year adventure, I will be covering the food and overall dining experience of Hong Kong. Although still obviously part of Asian cuisine, Hong Kong has been influenced heavily by foreign cultures, and of course this is going to be reflected in its food as well.  While I have gotten used to eating many of the exotic foods in Asia teaching English in Korea, Hong Kong was still a bit different from what I was used to.

Despite Hong Kong being a foodie’s paradise boasting gourmet restaurants from a variety of culinary backgrounds, my travel partners and I generally stuck to the “native” cuisine. By that, I mean Cantonese food, which was interesting to say the least. Luckily, one of my friends speaks Cantonese so she took a bit of the risk factor out of ordering, however sometimes we were never totally sure what was coming out of the kitchen. In general, eating out in restaurants in Hong Kong is pretty cheap as we never ended up paying more than 20 or 25 bucks per person.  Keep in mind however I was eating with two of the bigger gluttons I know, so we were by no means ordering socially acceptable amounts of food. 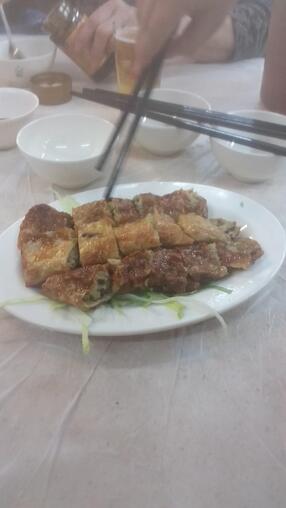 Cantonese food is delicious and incredibly rich and it often comes in small portions of different dishes called dim sum. It is similar to Korean food in that most dishes consist of noodles, rice, and dumplings.  My favorite part of the Hong Kong cuisine was their meat.  In Hong Kong they love to slow roast their meat, which brings out a whole new level of flavor. Be prepared for a lot of chicken, pork, and duck. The duck in particular is quite good. Also, make sure to try siu yuk, the roasted pig that is sometimes served with soy sauce. Speaking of soy sauce, that brings me to my one caveat about Cantonese food, and Chinese food in general. In my opinion, many of the foods, while quite delectable, do carry with it a high level of sodium.  The Chinese however do not share the Korean affinity for limitless supplies of purified water, so you may find yourself feeling a bit thirsty. The Chinese love to drink tea with their food, but I am not a tea guy, so that left me in a bit of a pickle. This issue was my only bone to pick with the food in Hong Kong.

Be Bold When Eating in Hong Kong

If you are feeling bold, Hong Kong has plenty of strange food options as well. I ate pigeon for the first time in my life, as well as some radish cakes, which are actually pretty good once you get past the weird consistency. The ox tongue and cow pancreas were also quite good as well. Red bean soup for dessert and curry fish balls normally would seem very odd to me, but after living in South Korea and accepting the Korean love of red bean and fish cakes, those did not really faze me too much. 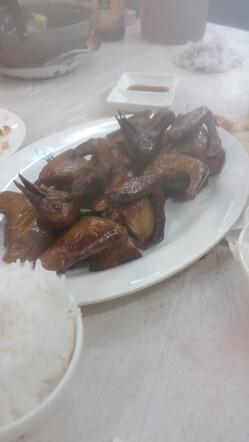 If you got a bit of sweet tooth and are not a fan of the red bean, then I highly recommend the egg tart, which is essentially a pastry with a warm cooked egg in the middle. Also, the pineapple cakes that you can find at many bakeries are heavenly to say the least.

As a proud fat guy at heart, food is at the center of any vacation for me. Hong Kong certainly did not disappoint, and it definitely provided its fair share of memorable eating experiences.