Enjoy a Summer Weekend of Games and BBQ in Korea's Countryside

The weather in Korea is heating up which means summer has arrived! To celebrate the beginning of summer, one of my friends invited us to go to the popular Daemyung Resort in Yangpyeong. About an hour and a half away from Seoul, Daemyung Resort is located in Korea's countryside of Gyeonggi-do.  Being able to make short distance weekend getaways is one of the great perks of teaching English in Korea. 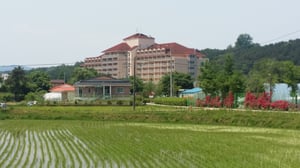 When we arrived by subway, we were literally dropped off in the middle of what appeared to be rice paddies tended by the local village people. It had been a while since I had been out in the countryside so it was nice to get out of the city and get some fresh air. It was really a surprise to see that there was really nothing else out here but a few homes and the resort. From Wondeok Station, we walked about 2 kilometers to get our vacation spot.

Our other group of friends drove their cars from Seoul to carry our necessary supplies for the weekend getaway: meat, ramen and alcohol.  When our group of 14 met up, we did what most Korean vacationers do, we played a bunch of games. Luckily, one of our friends made an itinerary of the different games that we would play. Before playing games outdoors, one of our yoga instructor friends decided to hold a yoga class so we could stretch and warm up our bodies.

Some of the games we played included Korean style dodge ball (Capture the Queen), jokgu (kicking volleyball), and volleyball. If you don't like staying out in the Korean summer heat for long periods of time, the resort offered some indoor recreational games such as free table tennis, which some of my friends participated in.  After a few hours of playing around, we all gathered together to go bowling. In typical Korean style, every game has to have some kind of punishment. While 1st place got to relax the until dinner, 2nd place (my team) had to prepare the meal and tables while the last team had the worst task of cleaning up after all of us. If you live in Korea, recycling is extremely important here so they were missing for a long time after dinner. 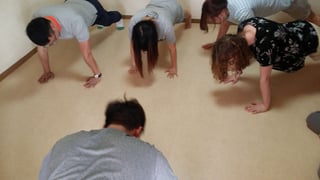 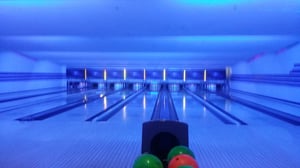 Come dusk, we had a Korean style BBQ of samgyeopsal and hot dogs. For dessert, we ate grilled pineapple which was a first for me. Typically, when one does a resort BBQ, the group has to bring all of the food and drinks because there are usually no markets nearby. It was great being in the outdoors barbecuing with other Koreans. There were a lot of families celebrating anniversaries and birthdays with their loved ones. One of the Koreans jumped on one of the picnic tables and asked us to congratulate his mother who turned 80 this year. 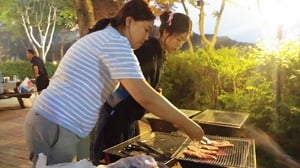 After dinner, many of us just sat around our room’s kitchen and played some more games and had a few cocktails. We played a Korean style game of charades, Korean style 4-card poker (badugi), and a popular Vietnamese card game called BC. It was a great way to get to know each other since for some of us, it was our first time meeting. Another Korean game that we played is the Pepero game. A common game between opposite sexes, one person holds a Pepero stick in his or her mouth while another person eats it. The shortest Pepero stick wins the game. By then, it was getting late in the evening, so it was the perfect time to take a walk outdoors to enjoy the moon and stars that are difficult to see in the Seoul sky night. 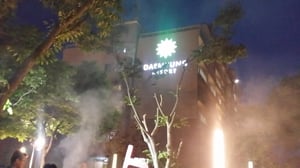 For some people, vacations are time for relaxation, but for our group it was completely the opposite. It was a jammed pack weekend full of fun and memories while being immersed into Korean game culture.