When I was thinking about first applying to teach English in Korea, I made a list of all the amazing things Korea had to offer, and of course food was on top of that list. I did not realize however, that some of my favorite foods would be from a fast food type place or Orange place as they are called here in Korea (by us foreigners at least).  Fast food in Korea, as I have discovered, is a lot different from the fast food I was accustomed to back home in Ireland.

Orange places or, Kimpasas, are open 24 hours a day, 7 days a week, and serve some of the tastiest foods I have sampled in Korea thus far.  What's even better is their food is a fraction of the price of other ‘western’ fast-food chains.

(My local Orange place in Daegu - so good)

Because my working hours teaching at ChungDahm are 4pm - 10pm most days, the Orange place in Daegu is very convenient for my co-workers and I to grab some food after work.  The food is so good that I even find myself coming here on weekends. Although it does not look like your typical fast food joint, the fact that you have your food on your table or to-go (which ever you prefer) within 5 minutes makes this FAST FOOD. 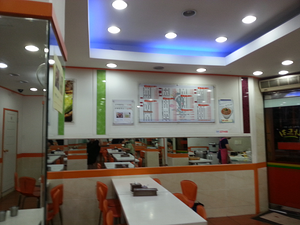 (On the inside they are very ordinary, however there is air conditioning and fans which keep it cool and bathroom factlities. This is one of several 'Orange places' in my neighborhood)

When I first came here, I had no clue what was on the menu, so for the first couple of weeks I pointed to the pictures and hoped for the best, and then when I got something good I would take a picture on my phone - so that I could get it again... (I still do this as I have not quite mastered reading Korean in the 2 months that I have been here). 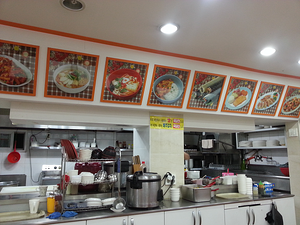 From topokki to kimbaps to Ramin (noodles) to soups this place has some mouth watering food. No matter what you order you are given a side dish of kimchi, radish and a chicken broth along with some soy sauce / vinager for dipping.  Also, they are always very willing to give re-fills. Their Kimchi in particular is so good, as I always take seconds and sometimes even thirds.  The best part however about eating at "Orange" places is that It's rare to pay over $5 for a main and side dish, with most mains costing around $2 - $4. Even if you order to take-out they throw in some radish or side dish in the bag.

Pictured above is topokki.  It consists of noodles, rice cakes, fish cakes, vegetables, and is served in a delicious spicy tomato based sauce. I also ordered a chamchi (Tuna) kimbap. When I first tried to eat this with chop sticks, it was messy! Now I'm a pro... almost.  The meal cost around $4.70 for Tuna kimbap and topokki.

I was so hungry that I also ordered Korean dumplings. The dumplings come fried or steamed.   The entire meal pictured above was and still is one of the tastiest meals I’ve tried in Korea so far. I would also like to mention again that the entire meal cost less than $5 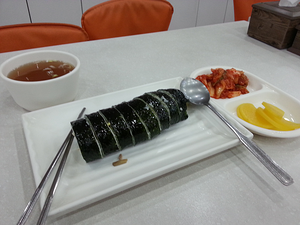 Pictured above is a Kimbap.  You can get several kinds; from tuna to veg to spicy and non-spicy. It makes for a tasty snack and it only costs $1.10.

There are many dishes that these Korean fast food type places offer, and I cannot wait to try more. What's even better about these fast food places compared to others is that you're eating REAL food, which fills you up and doesn’t have 1000's of calories (unless you're getting the fried dumplings of course!)

There is another type of Korean fast food also worth mentioning, while you are teaching in Korea.  You should most certainly sample some of the amazing street food. Here in Daegu the street food is more of an open window type place, where you line up take what you want and pay for it. Usually the color stick denotes how much you pay. You can take as little or as much as you want, and it is a really quick and efficient way of snacking.