Fun Activities to do on a Budget while Teaching in Korea

Sometimes when you want to go out with friends you need to be conscious of spending. Things add up quickly, and it doesn’t make sense to blow all of your extra money all at once. While going to the movies or spending the day lounging at the beach, relaxing in a park or hiking a mountain, can be both fun and cheap, I wanted to make you aware of some activities that are not only inexpensive, but also are unique to Korea.  Below are three activities my friends and I enjoy and I recommend you give them a try during your time teaching in Korea.

When I first came to Korea, I was addicted to a game called League of Legends. Now, being old hat, I have since lost interest. During that time, I always wanted to play with coworkers and other friends, however I found it wasn’t comfortable to play with friends in anyone's home because usually we didn’t have enough space to set up laptops, chairs, and desks. Luckily, I quickly found that there were businesses dedicated to simply playing video games with friends!

A PC Bang, or PC Room, is just a large singular room that has been fitted with dozens of high tech gaming equipment. We are talking huge monitors, soft comfy chairs, gaming headphones, and essentially all the accessories you need. These rooms also tend to have cup-ramen and other snacks waiting to be devoured upon purchase. And the best part of it is that it only costs around $2 per hour.

The computers are pre-loaded with some of the most recent games, such as Battlefield and Overwatch, making it the perfect place for gamers to chill.

If you’re not into games, you can also watch movies or surf the web at the PC bangs. Finally, If you want to go with your significant other it is not uncommon to see couples playing games online such as Monopoly.

One other activity that is quite popular in Korea is going to a singing room which is basically the Korean version of karaoke. These rooms are generally inexpensive, and you can go with a huge group of coworkers, however things can add up quickly. My suggestion, instead of going to the regular singing room, go to a coin singing room. It may seem silly, but it feels so much more comfortable, and the price is quite a bit better.

For the Coin singing room, it is just a smaller sized room where you put in coins. To compare, the regular noraebang has much larger rooms, and you have to prepay at the front counter for a set number of songs.  At the Coin Singing room however, you put in 500 won or 1000 won, essentially 50 cents or 1 dollar, and you get 2 to 4 songs depending on their individual prices. Also, when you put in more money usually they give you extra songs.

This is a really fun activity, and the best part is they typically have the most recent pop songs. I enjoy singing Coldplay, Adele, or Damien rice, but they also have a number of other songs and genres as well. I will never forget the wonder and joy of watching my friends trying to rap. 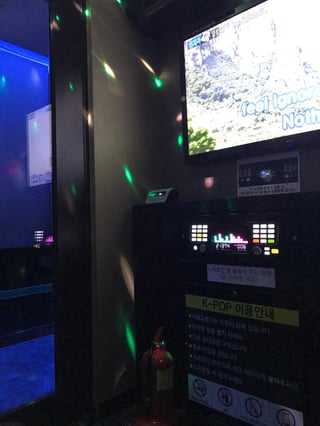 For coin Noraebang, two or three people is best to go with, but you could probably squeeze in a fourth. One of the main differences though is that at a Coin Noraebang no food or drinks are allowed. However, at non-coin rooms they typically have some sort of food or drink that you can get with the room.

While most arcades in the U.S. have died off completely, arcades in Korea are still thriving. They are also something else entirely. Usually, they come pre-loaded with a number of different games and activities, often including arcade style fighting games, basketball, darts, and crane games. But the best thing about them is the ease of access. Arcades are almost everywhere in Korea. I could find at least 5 within less than a mile distance.

These businesses are generally cheap for one or two games, and can be a unique way to spend time with others. I have had friends who have gone to the arcade with large swaths of coins just to enjoy their weekend, staying there for hours at a time. I have also seen Korean students, young and old, do the same. Not much is better than seeing your friend who is being overly proud of their gaming skills fail and look embarrassed.

With all of that said, this concludes my short list of cheap activities to try during your time in Korea. Whether it be a date, or just something you do with friends, I hope that you enjoy! If you know of any other activities that you like to do, please comment below.