It's finally warm enough for a cold-blooded person like myself to go camping! And that's exactly what my friends and I did to celebrate a birthday! The birthday girl chose to travel to Miryang, specifically for Hobakso Pond. Miryang is just a little ways northwest of Busan, so still very much in the southern portion of South Korea. Hobakso Pond is said to have been a spiritual place where people would come to pray for rain many years ago. We read that today, people still visit to enjoy the waterfall, the fairly-deep swimming hole, and the large slabs of white rock faces and boulders.  In this blog I will recap my camping trip in the woods and tell you why you should get a way from the city one weekend during your time teaching in Korea and do the same. 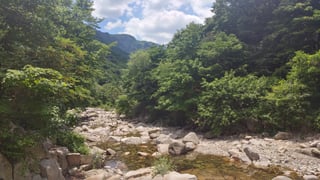 As far as transportation goes: we realized we'd have to take either a bus or train to Miryang Terminal from Busan. From there we'd need to take a bus to either Nammyeong or Eoreumgol which takes 40 minutes and operates at 40 minute intervals, or we could try to grab a taxi (but we were six so would have to take 2 taxis). We decided that with all our camping gear, it would be easier to just rent a van for the weekend for 200,000 won and split the cost, which in the end was only a bit more expensive than the more confusing and time-consuming public transport option. It turned out to be a very efficient and fun decision. We could comfortably sit, talk and sing together for the hour long trip. 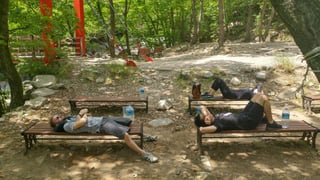 Once we arrived to Hobakso, we were at once happy to be in the sun, stretching our legs and distraught because no tourist website mentioned that it would cost us 50,000 won per tent to camp near the pond (which was also fenced and closed off to the public)! It was really a disappointment to learn that something that ought to be enjoyable was so strictly monetized. But this setback made having a van all the more trip-saving! We set out to find a campgrounds elsewhere in the surrounding area and quickly found the beginnings of hiking trails at the base of a mountain. We took a risk and set out to find a flat spot, and we surely found our cozy spot not even 10 minutes into the trail, right beside a river. It was wonderful. We’re still unsure if it was kosher to camp there, but no one said anything, unlike the previous location, so we rolled with it. 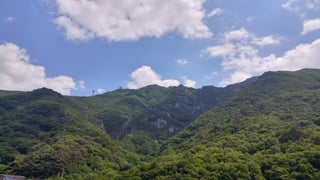 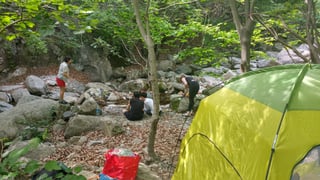 The woods were easy to navigate, large rocks for clambering were dispersed throughout the length of the river and what made it even better is that the mosquitoes weren’t even a huge problem. After arriving at our camp site we set up our tents, and made a bucket fire and while some of us cooked, others gathered more firewood. As the night went on we sang, played campfire games, told scary stories, enjoyed spirits, laughed heaps, became closer, and celebrated the repose of being away from the city for a weekend.

If you’re inclined to camp, rest assured that South Korea has the spots, you just have to search a little bit harder. But that makes it all the more fruitful. Actually it’s becoming more and more of a fad thing to do, especially beach camping. A Korean friend told me that people like to imitate celebrities who go “glamping” or “glam-camping.” When I visited Boseong (blog post to come!) there were dozens and dozens of people camping on the beach, with tents three to six feet apart from each other. Unfortunately, you usually have to pay to camp in designated camping spots. That’s why, if possible, it might be more fun to respectfully camp in more hidden places!

Tags: camping, busan, things to do on the weekends, outdoor activities, Weekend activities in Korea