One of the best things about teaching in Korea is that there is no shortage of festivals or events. Whether it is the Daegu Body Painting Festival, the Busan Fireworks Festival, or the Seoul Lantern Festival, they happen up and down the country and are all easy to get to. This blog will look at the Holi Hai festival (the Festival of Colors), which I recently attended. The Holi Hai festival celebrates spring and love while dancing, throwing colored powder at each other and smearing paint on friends and strangers alike. 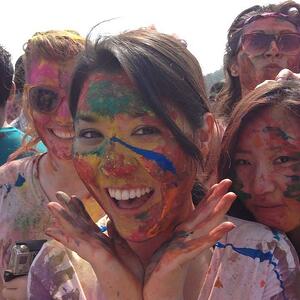 (Anna, my Friend, she is also an English Teacher in South Korea).
How to Get to Holi Hai Festival:
Getting to Busan, from Daegu, where I live, or even Seoul is very easy, thanks to the KTX Rapid rail service. A one-way ticket costs 17,000 wan, or $17 but if you are budget conscious, or you don’t mind spending some extra time on a train, you can take the slow service. This service costs 9,000 wan one-way, and it brings you straight to Haeundae Beach. Traveling to Holi Hai this year, my friends and I decided to use the KTX. It took only 45 minutes to get to Busan’s main station and from there we took a taxi to Haeundae. The taxi cost 15,000 wan between four people, so it was really cheap. Any time I am in Busan, (providing it is not rush hour) I prefer to take a taxi, as it is quicker than taking the subway and during festivals, like the fireworks festival, the subway can get really congested. We booked our ticket to Busan in advance, using the English Korean Rail Service, but decided to not book our ticket back on Sunday, as we did not know when we would be ready to leave.
About Holi Hai:
In what has become an annual event in March organized by the Indian community in Korea, Holi Hai, invites people from all over, via their Facebook page, to attend the paint throwing festival. Each year, this event happens in Busan, on Haeundae Beach, a popular spot for English Teachers in Korea.
The price for attending this year’s Holi Hai Festival was 10,000 wan, or $10.  The cost included all the paint, and some great Indian snacks, such as samosas. Due to the fact we were running a little late, we did not get to enjoy the samosas this time around, but I heard that they were really delicious. Because of the vibrant colors of the paint everybody wears white to the festival, so when you throw the paint, which is in powdered form, it really stands out. The weather this year was really nice, so when the festival ended, we washed the paint off in the ocean. 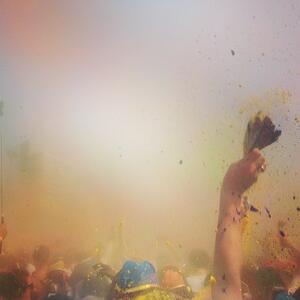 (Thankfully, my camera is dust proof).
Accomadations at Holi Hai:
We decided to stay in Busan over night, and make a weekend trip of it, so we booked a motel using Agoda.com. This site has proved to be popular among English Teachers here for finding cheap accommodations up and down South Korea. Some people even use it to book hotels in other Asian countries for vacations. Having used it several times myself, I can say their prices are very competitive. Whether you want a place to stay in Seoul, Busan or Daegu, check out Agoda.com. We ended up booking two rooms for 40,000 wan per night per room, which is a very good deal.

John May grew up in Dublin, Ireland where he is from & went to Trinity College – one of Ireland s best known universities. He graduated from here in November 2012 with a B.A. (Mod) in Geography & Sociology. John has always had a passion for traveling having been to most of Europe, he decided to explore Asia after Uni. He had always wanted to teach and thought what
better way to travel than teaching English on the way. John is currently teaching English for Chung Dahm Learning in Daegu, South Korea a position he found through Aclipse; John has been in South JKorea for almost two years now and he loves every minute of it!