Get to Know Korean Dining Etiquette

When moving to a new country one of the most difficult cultural things to learn is eating with other people. Naturally, we can all eat. We can follow our own cultures okay, but even then some people don’t completely understand proper eating etiquette. Some people chew with their mouths open, while others use their clothes as a napkin. While you might not think that these things matter, they definitely matter for other people. Therefore, you should learn proper Korean dining etiquette in order to not look foolish during your time living and teaching in Korea.  In this blog I will offer some tips about how to properly dine in Korea. 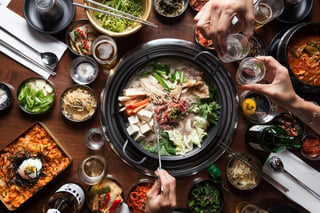 I have taken quite a bit of time to research this topic. I have also lived in Korea for 3 years, however, I am not Korean. Therefore, I will try my best to convey what is appropriate or inappropriate when it comes to meals, but please take it with a grain of salt as, like I said, I am not Korean and also rules change depending on who you are eating with. The older generation has a different set of rules, but the younger generation follows more closely with American etiquette. Generally speaking though, you will most likely be forgiven if you make a mistake, everyone does, and also not everyone knows these unspoken rules. Just like in every other culture, not everyone knows, or follows the rules.

When eating with other people at a restaurant, you should know that everyone is supposed to wait for the eldest or most honored person to sit. They are supposed to sit in the chair furthest from the door. However, if people seem to be sitting already, or there isn’t a lot of pressure, I would just go for it. If though you do feel pressure, it is always better to be safe than sorry. For example, if you’re dining with your your boss it’s always better to show yourself as extra courteous and kind. 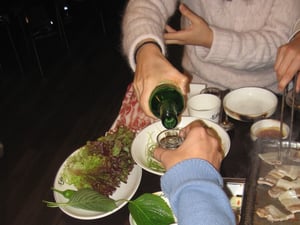 Alright, so you're sitting now, and the food is arriving, you’re making light conversation, when suddenly you realize that you’re thirsty. Most likely, someone has already filled up your drink for you. If you are realizing this, it might be too late. In Korean dining it is very common practice, even among friends, to fill each other’s glasses. Whether it be water, or alcohol, you’re supposed to fill each other’s glasses. Now, because alcohol is very much within Korean culture, you should know that there are specific rules for it. First, if someone offers you alcohol, you are supposed to take it. How do you take it? Well, put the glass in your right hand, and grab your elbow with your left hand. Then take the bottle from the person who just poured your drink, and do the same thing for them. When you pass the cup back to them, grab the elbow of the hand that is reaching. 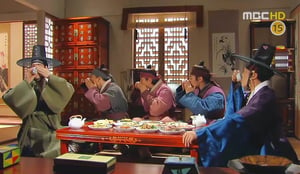 To drink alcohol, the younger people are supposed to turn their heads, and eyes, away from the eldest person while they are drinking the alcohol. For me personally, I don’t really like alcohol so my advice if you don’t drink alcohol, or don’t want to drink much, simply take it, turn like you’re going to drink, act like you’re drinking, and set it back down. Or worst case scenario, if you have to tell them that you don’t drink alcohol, ask for them to pour you water, and cheers anyway. Just try not to make a big scene out of it, and enjoy their company. That is what is most important.

The other taboos are also simple to remember and two involve chopsticks. Rule number one about chopsticks, don’t point with them, which should be easy to remember. Actually, Korea has a general rule not to point at all. When someone points, they always gesture with their whole hand open.

The second rule involving chopsticks is to not put them up and down inside of a bowl. Always place them flat against the table. I always grab a napkin and put it under the chopsticks. The reason for this taboo has to do with some traditions involving funerals, and ancestor’s deaths. So, try to avoid it.

Generally at the meal, you will have a spoon and a pair of chopsticks. You should use your chopsticks for nearly everything, and the spoon for soup and rice. Do not use your chopsticks for picking up rice, however it is okay to use them to push the rice onto the spoon. In Korea, food is not typically eaten with the hands. Finger foods are non-existent within Korean meals, therefore, don’t use your fingers.

One of the biggest cultural taboos, is don’t blow your nose at the table. Blowing your nose around food is a big no-no. Most likely it’s about sickness and cleanliness. So, if you need to blow, excuse yourself from the table, maybe even go outside and blow. 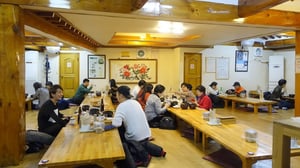 In Korea, there are two kinds of table set-ups. There are the more traditional, sit-on the floor or cushion, and the obvious alternative, chairs. I can not sit on the floor for long periods of time. It is far too uncomfortable and I am far too out of shape. If you’re like me, here are some tips. Try to get a seat next to the wall so you can lean on it. Also, hope that the person you are eating with does not spread their legs out under the table, so that way you can spread your legs out under the table. It gives much better balance. Try not to push up against the table or make too much movement though, otherwise the food will shake, and the person you are eating with might be unhappy.

Also, you should know that most Korean meals, that aren’t at a kimbap shop, involve sharing the food. A kimbap shop is a restaurant that sells basic Korean food, at a relatively low price. At more expensive restaurants and barbecues you will most likely share the meal. In order to not contaminate the food, usually there is a spoon or chopstick for the food that is to be shared. If there isn’t, then just use your own! Korea really is big about sharing food so if you ever have a snack and are around other people you are expected to share your snack with others around you.

Last, and most obvious, don’t bring up any gross or tension seeking topics while you are eating. These topics include any idea about eating dogs, politics, religion, or comparing Korean culture with your own. It’s really just better not to mention your culture, or Korean culture, unless the other person asks.  I hope these tips have been helpful to make your dining experience in Korea as smooth as possible.