Prior to moving abroad to teach English in Korea, one of my concerns was about how to maintain a healthy lifestyle. At home, I enjoyed regularly exercising at a gym and have done so for years. Coming to Korea, I was apprehensive about whether or not I would be able to access an athletic center, and how my body would, inevitably change. I have been pleasantly surprised at how simple it has been to exercise regularly and stay active. I'm going to share some of my experiences so far related to health and fitness living in Seoul.

Like most expats, I found I experienced some weight gain (and muscle loss) within the first month here in Korea. Not only was I exercising much less thanks to training week and adjusting to a new home, but I was also eating a lot more. I think it's natural for one during their first few weeks in a foreign country to try all the different food, and forget about the impact on their body. However, if you are used to exercising daily and eating somewhat healthy the instant Ramon and mandu (Korean dumplings) will take their toll shortly. Not to mention the Soju which I was unable to counteract the effect of via long nights of dancing. Inevitably, reality sets in and you realize this is now your home for the next year, and it would be a smart idea to gain some balance. Now that I have been in Korea for 6 months, my exercise routine and diet has changed quite a bit.  Below are three ways that I had adjusted to maintaing a healthy lifestyle in Korea. 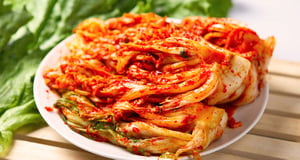 Ohhhh the Kimchi. Korea's infamous side dish is packed with tons of vitamins and minerals thanks to its fermentation process. Kimchi is known to aid digestion, prevent the growth of cancer, and fight harmful bacteria. I had tried kimchi several times in Canada, but now I have kimchi daily (so Korean, I know). Kimchi is so delicious and so good for you. It's nice to have before a meal, but I've found it's a flavorful addition to other favorite dishes such as omelettes, rice, and tacos.  I've experimented quite a bit to say the least. While adding kimchi to my diet has been beneficial, I have found that I consume carbs less overall, and the ones I do have are rice, and fruits. While every body is different, I have found that I feel better having more rice compared to wheat, the carb staple in North America. I've had a lot of interesting discussions with expats about rice- some find the increased consumption causes weight gain, while others don't notice a difference.

Eating out for dinner is popular in Korea, and can be done quite healthily. Bibibimbap, Shabu-Shabu, Seollantang, and Samgaetang as well as various soups and stews are good options, especially if you order them with less salt. When going out for KBBQ, I would recommend sticking with leaner cuts of meat, and incorporating as many veggies into the meal as possible. 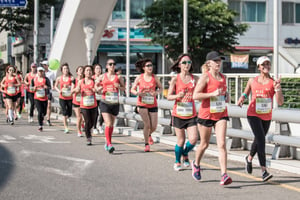 It took a short time for me to get back into an exercise routine once I settled in. I'm fortunate enough to live a five minute walk from the Han River in Seoul, which has numerous running trails and biking baths alongside it. It is really amazing to be able to run along the Han almost daily. There are numerous public parks that along the Han, all filled with exercise equipment and weights. During the summer I really appreciate that you are never further than a kilometer from a water fountain or public bathroom. Now mind you, I have never enjoyed long cardio sessions before, but after being inspired by a friend, I decided to train for a half marathon. Over the past six months I have developed an appreciation for running which I did not anticipate. Without a doubt, running the Nike Women's Victory Tour was one of the most physically challenging things I've ever done, and was a great experience as a foreigner. 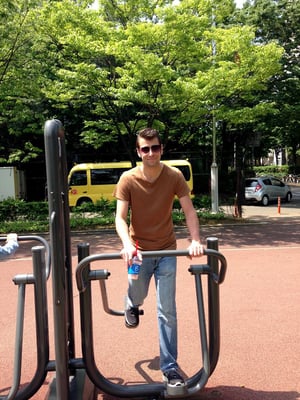 If you prefer exercising in a gym, you won't have a problem finding one. Gyms are easily accessible throughout Seoul, and relatively affordable. During the winter, I had a membership to a gym located close to work which cost me 130,000 Won (around $113USD) for four months. Much cheaper than at home, with all the same amenities and then some. As soon as the summer heat sets in, I will be renewing my membership so that I can exercise indoors. 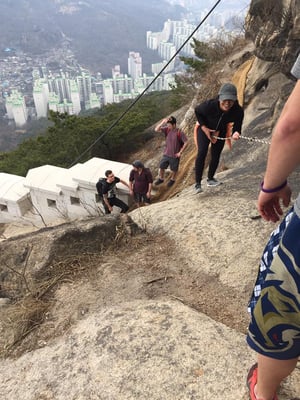 I have found it extremely easy to stay active without even trying here, largely, because the the best way to explore the city is on foot. Not to mention, I don't have a car, which rules out any opportunities for excessive laziness! Simple things, like walking to work each day build a moderate amount of activity into your daily routine, without even thinking about it.

Hiking in Korea is pretty much a national pastime, as Seoul boasts Bukhansan National Park within the city itself. Interestingly enough, Bukhansan is one of seven mountains located in Seoul. South Korea is known for it's hiking culture, with a unique dress code. One cannot help but notice the intense gear that fellow hikers don to climb what appear to be small peaks. I remember setting out to climb Bukhansan with a group of friends, looking around, and thinking that the hiking gloves/sticks and assortment of North Face gear was comical. I was a fool. After 3 hours of huffing and puffing, we finally made it to the top of one of the highest peaks in Bukhansan. We had to use a rope to heave ourselves up and I for one, was struggling to find footing on the large slippery rocks. Meanwhile, there were Korean ajushhi's (middle aged men) bounding up like golden retrievers. I quickly realized how handy appropriate hiking gear is... next time! Hiking in Korea is a serious workout that's a LOT of fun, and rewards one with some amazing views. I am looking forward to hiking in Seroakasan National Park, another famous spot which is supposedly stunning in the fall. 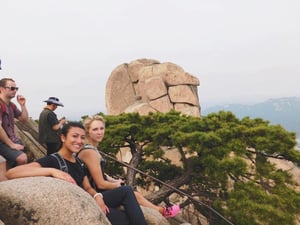 Of all the health and fitness pointers, I think the most important thing one could do is find like-minded people to stay active with, and pursue goals together. I'm lucky to have made some terrific friends while teaching in Korea, and am looking forward to what the next few months have in store. Stay tuned!