The city state of Singapore was the last place I visited during my year of teaching English in South Korea. When I first signed my contract and began planning my time off, I knew I would have to go to Singapore. I may be biased (since I was born there and have lots of family living in Singapore) but Singapore is downright incredible. The blend of cultures, jaw dropping architecture, posh shopping districts and mouth watering cuisine are just a few reasons why it is an awesome place to visit while you are abroad. Last year, Singapore celebrated 50 years of independence after leaving the federation of Malaysia. Since the 1960's, Singapore has continued to grow economically, establishing itself as one of the "Asian Tigers," partly due to it's location- the Port of Singapore is the busiest in the world by tonnage handled. Today, Singapore is one of the world's most popular tourist destinations, with a cosmopolitan culture that marries old with new. Additionally, it is an easy city to navigate for Westerners as English- well... "Singlish" is spoken everywhere and the public transport is a breeze. I hope to give you a small look at some of my favorite things to do in the Lion City. 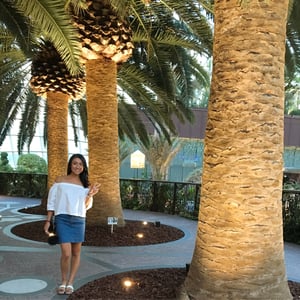 I flew Korean Air to Singapore's Changi Airport, out of Incheon International airport. There are several flights daily, and I managed to secure a red-eye that left after work on a Thursday. I was able to take a long weekend because the flight is around 6 hours at awkward hours, which leaves traveler's a little tired. Thankfully, Singapore is only one hour off of Korea, so the jet lag was not an issue. One of the perks of traveling through the night was my flight was not crowded and I had the entire row to myself, which allowed me to sleep comfortably. Once I arrived in Singapore, I took a taxi to to my accommodation since it was before the subway started.   Of note, although it is easy to navigate the MTR system- I recommend downloading the Singapore MTR app ahead of time to get a feel for where things are. 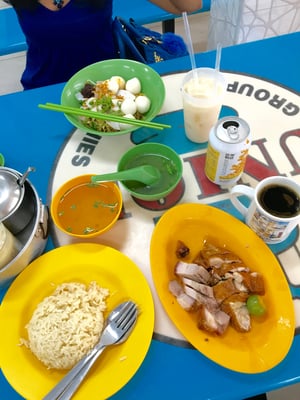 If you travel to Singapore, come hungry. The hot pot of cuisines to eat are considered a unifying cultural thread, and a major reason to come and visit. Singaporeans are fanatical about food, and it's easy to understand why. Singapore's multicultural heritage blends Chinese, Indian and Malay cuisine into some dishes that are as diverse as the people. In Singapore, common greetings are "Hakan" or "Jiak Ba Buaywhich is a linguistically watered down way of asking if the other person has "eaten yet?" or "eaten already?"  Singapore is foodie paradise as there are an astounding number of dishes to work your way through, many of which can be found at Hawker Centers. 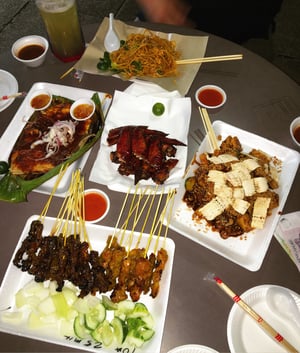 Hawker Centers are open air food courts that can be found all over Singapore. The food enjoyed in Hawker Centers is as cheap as it is delicious- with most plates running around $3-4 USD. Dining at Hawker Centers is a must-do for tourists visiting Singapore as they are widespread, convenient and affordable. I could honestly dedicate several blog posts to the Hawker Center food in Singapore, but to keep it short, these are my favorites.

Wanton Mee: Egg noodles served dry with dumplings and pork. At the Hawker Center they will ask if you want it done spicy.

Sambal Stingray: barbecued stingray with sambal served on top, usually a lime is squeezed on top right before eating.

Roti Prata: Indian fried flour based pancake, usually served with some sort of curry, but can be done sweet as well.

Kueh Lapis: Layered desert/snack cake made with rice and coconut, that is sweet and colorful.

Hainanese Chicken Rice:  A 3 in 1 dish consisting of steamed white chicken cut into bite sized pieces along with rice soaked in a chicken flavored broth and topped with coriander. Usually served with a garlic chili dip.

Check out a list of the 10 Best Singapore Hawker Centers, and find your own favorites. 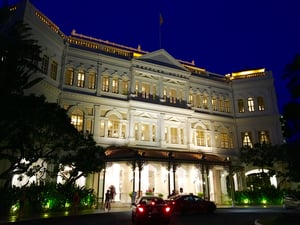 Visiting the Raffles Hotel is a fun way to spend a few hours... and spend some serious money. The Raffles hotel is a colonial style luxury hotel located in Singapore's business district. It is the birthplace of the popular cocktail, the Singapore Sling, and it is one of Singapore's most iconic landmarks, boasting stunning Victorian style interiors, with historic bars that have seen many famous people. Charlie Chaplin, Elizabeth Taylor, Michael Jackson, Karl Lagerfeld, John Wayne and Alfred Hitchcock have all been guests of the Raffles. While a night at the raffles would run you well over $1000 USD, wandering through the hotel is free, and drinking at the Long Bar, is pricey, but worth it for the experience rather than for the drinks. It's also a refreshing way to beat the intense heat during the hot and humid afternoons.

Little India is a center for the large Indian community in Singapore. The main drag- Serangoon road, is easily accessed by MTR. Little India has been successful at maintaining it's authenticity despite being filled with tourists coming to see the area. The area possesses many Hindu temples that are fascinating to go see. The oldest of which is Sri Veeramakaliamman Temple, which dates back to 1881. It is very busy on Sunday's, so go early to make sure you get a good look while not being swarmed by tourists. In little India there is lots more shopping to be done. In particular, there are cultural knick-knacks such as brass oil lamps, traditional saris, and plenty of home decor. The whole area was infused with the smell of fresh garlands and jasmine while I was visiting, as Deepavali (the major Hindu festival of light and holiday) was upcoming in October. A restaurant that is a long time favorite of my family's is called Banana leaf Apolo, where South Indian cuisine is of course, served on banana leaves.

Well known as an icon of Singapore, Marina Bay Sands is one of those "must do" touristy things while in the country. Marina Bay Sands is a massive resort that faces Marina Bay, and boasts the world's highest and longest elevated infinity swimming pool. Interestingly enough, Marina Bay Sands was designed by a South Korean company and was completed in 2010. While the pool is only accessible to those staying at the hotel itself, anyone can go up to the top bar in the evening to enjoy the sunset over a cocktail. I recommend going in the evening to get the day and night skyline as the sun goes down. The view is spectacular. 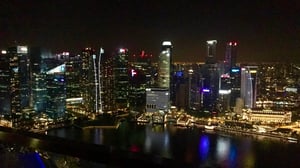 Gardens by the Bay is Singapore's massive nature park, designed to transform Singapore to "A City in a Garden." While Singapore is certainly a crowded city, littered with high rises and skyscrapers, it is known for being clean, beautiful, and green. The Gardens by the Bay are part of the city's design, to be a urban outdoor recreational space. My mom and I visited the flower dome, which maintains a cool temperature, allowing plants from mild and dry climates to survive and be displayed. Throughout the year according to the season, Gardens by the Bay puts on a different plant and flower shows. The current showing theme was Tribal Tempo, and consisted of many South African flowers and vegetation.

Once the sun sets, the Supertree Grove- a canopy of 18 artificial "super" trees is illuminated, via solar power. Walking through the cyborg trees at night is pretty surreal. The giant structures made me feel like I was in a sci-fi movie, or stepped into the world of Avatar. I thought it was so neat that each tree is designed to mimic a real one- they each echo photosynthesis, and contribute energy to run the park, as well as collect rainwater and channel it throughout the park. You can pay $4 to take an elevator to the top of a walkway among the trees, to get a better view of the trees, garden itself, as well as the city beyond.

While there is so much more to Singapore, I was happy with what I was able to accomplish in a long weekend there. I certainly came back to Chungdahm feeling refreshed and ready for my last few (*gasps*) weeks of teaching in Korea. I'm currently feeling extremely grateful for all I have been able to experience and see in one year. If you decide to teach abroad in Asia, I highly recommend a visit to Singapore for those that are into shopping, architecture, and of course, food!