How to Survive Training Week at ChungDahm

I cannot believe the craziness called Chungdahm training week is over! It was an intense yet fundamentally necessary experience. I have learned so much and made some incredible friends who I will be working with for the next year at Gangseo- our branch in Western Seoul.

Orientation Monday morning was at Chungdahm Headquarters, a 20-minute shuttle from Coatel Hotel, where my fellow trainees and I were staying in Gangnam. Our group met in the lobby bright and early and went over the usual greetings- where are you from, why did you decide to teach in Korea, when did you get here?

Upon arrival at Headquarters, we were separated into smaller training groups (1-3 people) whom with we would spend the week learning and mock teaching with. I was incredibly nervous and definitely butchered my first attempt at mocking, but was proud of how much I improved over the week. Receiving feedback from not only my trainer but also my co-teachers was extremely helpful in developing my teaching skills. Make no mistake- I was shaky nervous my first few times, but training week is designed to push you to work as hard as possible, and absorb a lot of information.

Finally, on Monday afternoon we were taken to our medical testing. After being ushered into the medical center, we handed over our paperwork and were given robes and sandals, with gender specific coloring of course. Next we were rocketed (and I mean rocketed!) through the various medical tests. We all had an EKG, eye exam, hearing test, dental exam, blood work, blood pressure tests, and gave a urine sample. I think we all were surprised by how quickly our entire group was processed, it was seamless.

After Monday, the rest of the weekdays were similar in structure- off to training early in the day, a group lunch, and then studying/prep time in the afternoon and evening. Despite the heavy workload our group had a lot of fun together and bonded rather quickly, usually over some delicious food.

One of the food highlights was a Caffé Benne.  Caffé Benne is a coffee shop in Korea, as popular as Starbucks in North America, but with a larger food selection. Conveniently located by Chungdahm Headquarters is a Caffé Benne that specializes in cream cheese bagels, which unfortunately not all of them do. Their diverse cream cheese flavors included wasabi, raspberry cheesecake, potato bacon, and green tea. My favorite was the lemon cream cheese my friend Johanna had- a serious symphony of sweet goodness.

Finally, on Friday after our final test and rounds of mock teaching in front of our trainer, we were told we passed! I was thrilled and relieved. After sorting out some logistical information, I went out for lunch with my friend Hanna during which we said at least 10 times “wow, training week is over!” 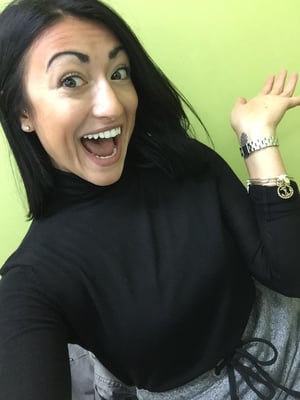 (This is an "I just passed training week omg!" selfie).

Training week is undoubtedly a stressful process. You’re brand new in a country where you don’t speak the language, are experiencing some sort of jet lag, and immediately must perform. While mocking seemed daunting at first, believe me it gets so much better. You eventually begin to realize how essential practicing is to being prepared for your first day in the class. The best part of training week is that you’re not experiencing it alone. You are surrounded by a group of people who understand and relate to your stress, excitement, and (if you’re lucky) constant hunger and caffeine addiction.

If I could give some advice to someone heading into training week I would say get as much sleep as possible, get to know your co-teachers well, and maintain a positive attitude. Although you may not understand the reasoning behind everything, trust the process and try your best!