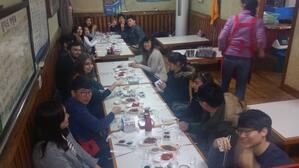 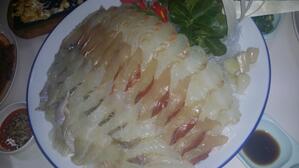 Usually the first round of the company party involves dinner (bulgogi, samgyeopsal, sushi/raw fish) and a lot of alcohol. If your branch manager/branch owner goes, the one thing that I would greatly advise is watch out for the topics that you discuss at the table.  If your boss is there, you can have but remember to be professional. In my years being here, some of the topics that were discussed were not appreciated by my boss and it caused a disturbance in the group atmosphere.


Here are some key tips to help you earn some bonus points with the locals when drinking in Korea at a party: 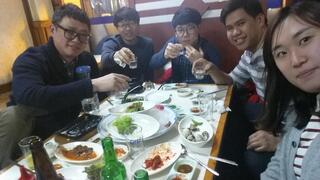 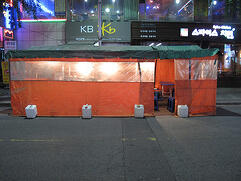 So this all happens if your group only has one round of drinks. Typically, there will either be a second or third round. A normal third round would be going to another bar or going to ‘노래방’ (karaoke room). Koreans love it when you sing with passion so you don’t have to be good, just have fun. All of the karaoke rooms here have tambourines and many of them have maracas. Don’t be afraid to shake and clap to your heart's content. Also, when doing karaoke in Korea, try to learn a Korean song or two, or sing a song that many Koreans would know (they really like Jason Mraz).


If you haven’t made it to a bar by the second round, then you may make it there for the third. If not a bar, you may want to head to a Po-jang-ma-cha ‘포장마차’. These are the very famous orange or green ‘drinking tents’ that you would see in many Korean dramas. Although it is cold outside, many of them have heaters inside which makes it quite cozy. You will see many groups or couples bonding over soju and noodles. 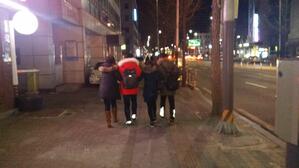 If the second or third round isn’t for you, that’s completely okay. Just make sure you say good bye and thank the person who just paid for your awesome dinner and drinks!