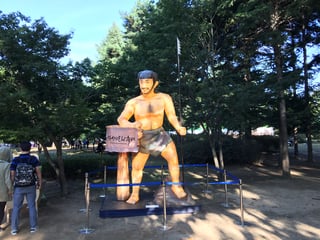 Amsa is the easternmost location on the Subway LIne #8 (pink line) and it is easy walking distance to my house (Cheonho-dong). This festival was a big deal because this year the Amsa-dong Prehistoric Settlement Site was up for final selection to enter the UNESCO World Heritage. 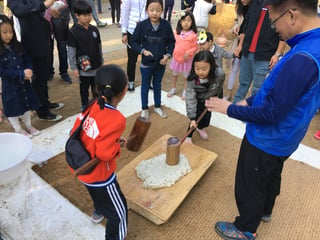 Upon entering the festival, there were so many Koreans who were dancing and taking photos of the fields in front of the village. There was also a main stage where famous Korean singers were performing. Not only that, but there were also numerous tents that were selling traditional Korean food, beverages, and trinkets. After entering the festival, my friends and I were escorted to a tent of young middle and high school students who were proficient in English.These group of students would be our official tour guides of the village and explain to us the cultural significance of this land. We quickly threw on our bright yellow vests, took a bunch of pictures, and let the tour begin. 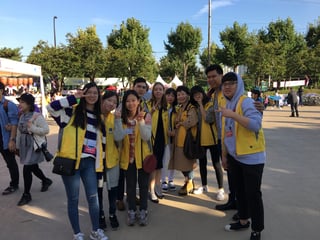 As a Westerner, I am not all that familiar with the history of East Asia or even Asia for that matter. All I learned in my high school world history class was about Genghis Khan, World War 2, and the Vietnam War, however after touring the village, I started to understand what it was like to have such a ‘nationalistic’ spirit. If you haven’t learned about Korea, Korea has been influenced throughout its history by the Chinese and Japanese. Each time these new cultures tried to instill their own laws and rituals upon Koreans, Korean culture was oppressed and suppressed.

Before this discovery, many Chinese people did not believe that there could have been an ancient civilization located on the Korean peninsula. According to the Chinese government, Chinese people migrated to the peninsula and settled here. However through science and carbon dating, scientists were able to show that there were artifacts found that predated the Chinese arrival. These people had their own civilization that ended up encountering the Chinese. They were also able to show us how their bartering or payment system was different from both China and Japan. Lastly, they were able to show how their pottery designs differentiated way before the Bronze Age. That means it goes as far back as 7000 BC! It was amazing to see this relics in real life and to see how these prehistoric people used to live.

There are many artifacts that are located throughout the village but many of them have been donated to various history museums in Korea. This is a great way to spend an hour learning about a prehistoric culture that much of the world outside of Korea has not learned about. If this cultural festival is able to raise awareness, this can potentially become the next UNESCO World Heritage site.

Although Korea is one of the most modern countries in the world, it also has a rich and vibrant history that continues to be celebrated.  It is for this reason why I recommend to everyone if you decide to teach in Korea to make sure you visit these historic sites while you are here.