For anyone living in Korea, or anyone of Asian heritage, people can notice that many have a layered and complicated relationship to Japan. Because of what I learned growing up, I never found myself interested to go there, but by some random chance, I visited three years ago while working at Chungdahm. I met this Japanese person who ended up being my best friend, and I am lucky enough to have seen the things and the people that I have there through and with her. She does a lot of resistance work with both mainland Japanese and Okinawan artists and activists who demand fair rights, justice, and truth. There are so many incredible people creating communities of care and liberation, and I feel so thankful to see what is happening on the ground, giving me a more complex perception of the cultures around me. 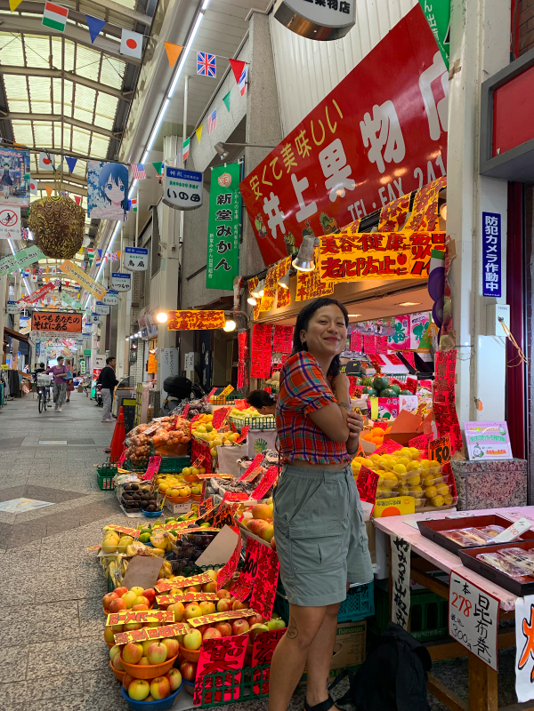 My best friend and I have traveled to Okinawa, Korea, and the Philippines together, teaching creative writing and dance in schools, detention centers, and community centers. We’ve been to indigenous festivals and learned about the cultures people often don’t get to see, and make an aim to visit war memorials when we can. So when it came time to use up some more vacation days, I decided to visit her in Kyoto, where she is currently studying Japanese history. The flight from Seoul to Osaka is lightning fast, so I took a red eye on Peach Airlines, which was very cheap. I arrived after midnight, then I took a bus to Kyoto Station, which is about eighty minutes from Osaka. It was raining all along the journey, which gave a bit of a romantic energy to the buildings and lights outside. My friend picked me up at the station, and we rented bikes together nearby. I was surprised at how many rental stations they had, which makes it much easier to travel around the city if you’re keen to exercise and also save some money on bus fare. The cycling took about twenty minutes to the outskirts of town where she lives. 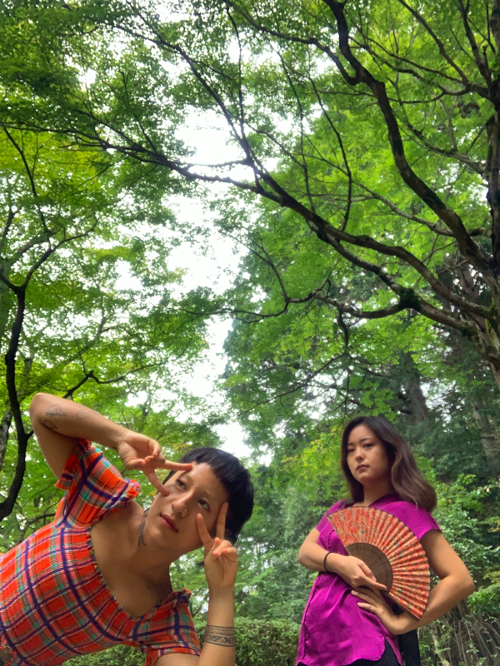 She welcomed me into her studio apartment with an array of delicious vegetarian fare, made of taro, marinated tofu, and seasonal fruits like Asian pears and figs. I brought some treats that are one hundred percent guaranteed to make you and your stomach happy--job’s tears tea, which is a powdered tea made from almonds, walnuts, and other grains to give an aromatic, creamy flavor; and songpyeon, the best rice cake of all time, anywhere, stuffed with brown sugar and sesame inside. These are two treats I bring everywhere when I’m flying out of Korea, because I feel such pride for Korean cuisine when I bring them. We drank countless cups of tea late into the night and then went to sleep to the sound of birds perched outside. 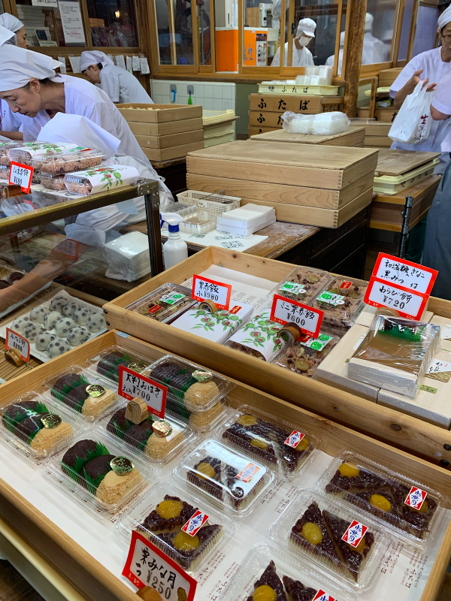 The next day we started by going to a very small local restaurant specializing in Kyoto food. They only serve twenty meals a day, with a bar that seats only ten at once, so it’s best to get a reservation. They have all vegetarian fare, and it is only one person who cooks and sets everything. They had delicious platters of steamed egg, tofu, scorched rice, and potatoes drizzled in plum sauce. Although the food was very simple, it immediately became one of the most memorable meals of my life. After lunch, we toured the market by my friend’s house, where she works in two places. The first is a bonito flakes shop, which is dried, cured, and shaved fish that you often use to make miso. Her boss let us play with his feisty cat and also told us the story about how he made a giant painted fish out of styrofoam that still hangs over and protects the market to this day. The next place was her mochi shop, that has been around for more than a hundred years. Even though it was a weekday, the line was around the street, and for good reason. The mochi was moist, chewy, and sweet...but not as good as tteok in Korea, but hey, I’m biased. 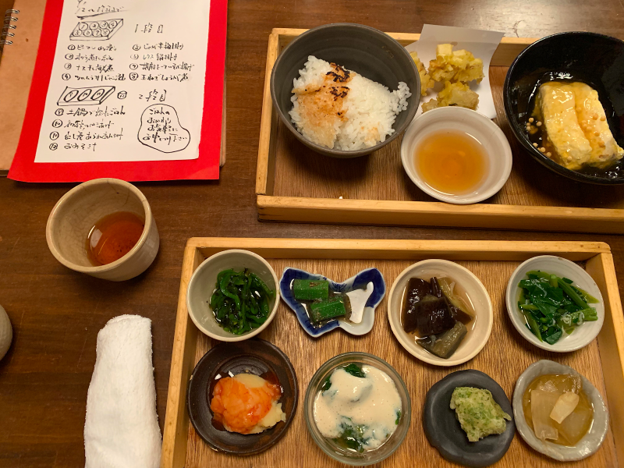 Afterwards, we took the train towards the center of the city to eat traditional matcha desserts. They gave us pure matcha tea, which I actually prefer, because it isn’t sweet, but perfectly balances the cookies, mochi, and matcha ice cream. Then we walked to Shisendo Temple, in the Higashiyama district, which is much less-traveled, so good for anyone who wants some peace and quiet. It translates to “hermit’s retreat,” which I can understand exactly why. It’s perched on a hill, and was built by Ishikawa Jozan, a former samurai, Chinese classics scholar, and landscape architect. He designed it as a retirement villa and it features a collection of 36 portraits of ancient Chinese poets. My favorite part was the mossy and lush garden that overlooks the property, where you can sit for hours if you want. 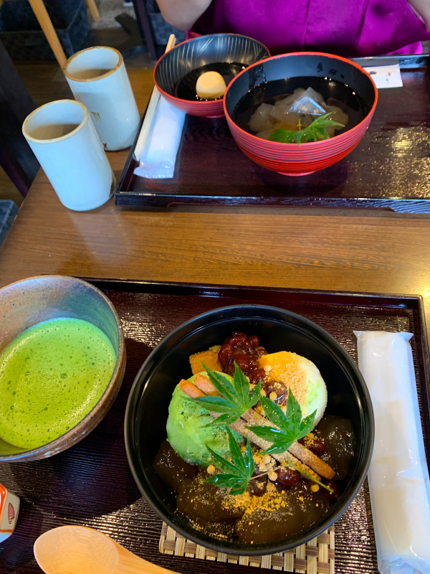 Then, we went towards the bustle of the city, which, for someone who lives in Seoul, isn’t much of a bustle. Kyoto still has a tranquility about it even in its most traveled areas. We went to Kiyomizudera Temple, which translates to “Pure Water Temple.” It was founded in 780 at the base of the Otowa Waterfall, which is where it gets its name. Although there were hundreds of tourists, it was no less magical, as it is perched at the top of the city. The orange colored structures, the wooden hall, and the brass statues of religious figures inside were just some of my favorite parts, and I highly recommend this place for anyone who visits the city. Afterwards, we walked down the street right outside the temple, which has many incredible shops to buy gifts and snacks. I bought some special furikake, which is a traditional dry seasoning that’s meant to be sprinkled on top of rice and vegetables. They also had curry flavored rice crackers, which I’ve never seen before, and was a hit with my friends when I brought them back to Seoul.

We decided to get a nice dinner and call it an early night, but even on just our commute home, we stumbled into so many fairs and festivals, including a full moon ceremony at another temple. We grabbed lychee sake and a local variation of mapo tofu for dinner, then walked along the Kamogawa River and watched the full moon. It was a dreamy end to a dreamy day.

The next day, we took a train outside the city towards a place called Asuka, nestled in the countryside. I cannot recommend visiting this place enough. Upon arrival at the train station, we rented electric bikes and cycled around the entire day. It felt like I was cycling inside a Studio Ghibli snow globe, and almost felt like the rice paddies would sprout eyes and start singing to me. We stopped at a local restaurant for delicious bento, then went to these legendary rock formations, the most famous called Masuda-no-iwafune, which means “The rock ship of Masuda.” The wildest part is that no one knows where these rocks came from, who built them, or why. They don’t resemble any style or construction of monuments nearby, and other theories include royal tombs or even aliens. Whatever they are, they are definitely a sight to see. 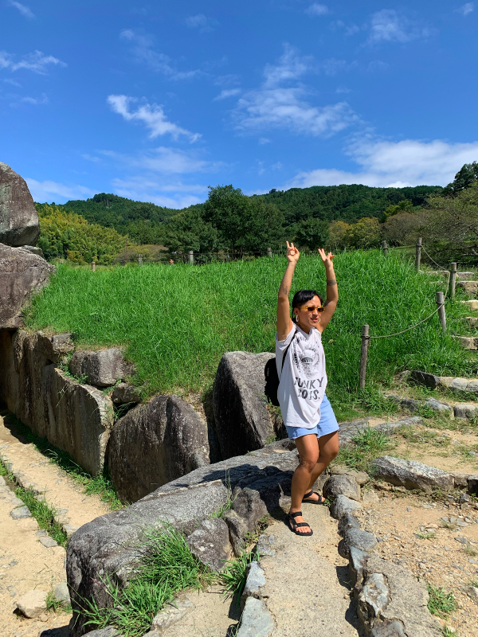 We went back to Kyoto, freshened up, then had a delicious tofu dinner and in the spur of the moment, decided to refund my 6am bus back to Osaka and rather pull an all-nighter in the city. We caught an 11pm train to Osaka, stored my luggage in a locker, and roamed the streets. Our goal was to eat nice food and go to maybe one cute bar. However, the city had other plans for us. We started off at a tiny bar filled with electrical cords, almost pitch black, playing trance music. Then we went to Golden Gai, a bar whose famous drink is called pineapple, and the staff do a song and dance each time someone orders it. We met kind older people, who happened to be zainichi Korean, meaning they were descendants of Korean people who moved to the country for work or other reasons during the colonial period. They told us stories of their family history and what it was like to live there, and they secretly paid our whole tab before they wished us good night. 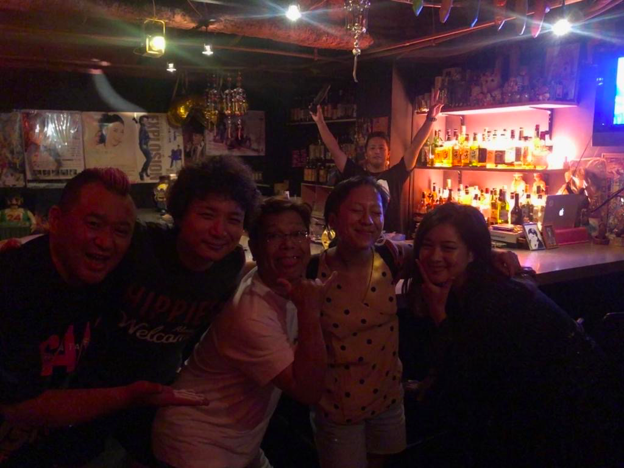 I had been feeling a bit sleepy after eating curry rice with my drinks, but then somehow we walked straight into a club filled with artist and skater types, where they played lots of house and funk music on vinyl. I always am keen for clubs like this, but it was a sleepy night in the city, so I wasn’t expecting this at all. We ended up dancing until six am when the club closed with all these sweet local folks. I took the train to the airport, stocked up my suitcase with grape and pumpkin flavored kit kats, and reflected on my brief, but wonderful time. Each time I go to Japan, I am humbled to meet many people, from student organizers, radical professors, to generous elders who feed me to the brim and joyful children playing in the park. It’s times like these that remind me that although there is so much pain and wrongdoing in the world, there is always beauty and kindness to counter it.