Learn About Chuseok: One of Korea's Most Celebrated Holidays

This year all Chungdahm locations will be closed next week for two days to observe the Chuseok holiday.  Chuseok is the Korean equivalent of Thanksgiving and depending on your branch, you might be lucky enough to get a few extra days off before and after the vacation. At Songpa branch, where I work, instructors were excited to hear about the schedule changes that will allow for a few extra days of relaxation!

Chuseok is the perfect time to enjoy a little vacation while living and teaching in Korea. The weather is perfect this time of year and everyone always seems to be in a festive mood as it is a time when Koreans travel countrywide to visit their families. The country's transportation system experiences heavy traffic during the Chuseok holiday as millions commute out of the major cities to reach their destinations. Often staying in your home city is easier than attempting to travel long distances with the masses of people. 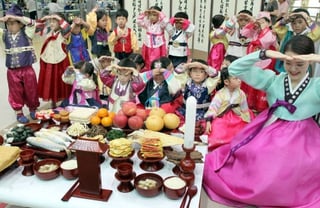 Airports are usually crazy during this time due to the long lines of people waiting to get through customs. However, if you can afford an international trip it would be a great time to travel as Asia and South East Asia have fantastic weather during this time of year. It is also a good time to explore your local city in Korea or visit the countryside. Hiking during this time also a highly recommended activity as the it is during this time that the foliage season has begun. In particular the foliage on Sorak Mountain is breathtaking.

Chuseok is a time when foreigners get excited for some time off, but for Koreans it is a valuable holiday that has tradition and meaning. So what is Chuseok? And how do Koreans celebrate it?

Chuseok as mentioned in the beginning is Korea's version the Thanksgiving holiday.  It is a time when Koreans get together with their family members and travel long distances to visit their ancestral heritage. It is a time that involves traditions and customs that are very important to Korean people. 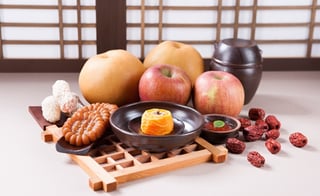 Chuseok is considered one of the biggest holidays in Korea and is also called Hangawi. On the morning of Chuseok, family members hold memorial services for their ancestors. Freshly harvested rice, alcohol and rice cakes are prepared as an offering for their ancestors. The food is displayed on a table that is neatly decorated with fruits and candles. Once the Charye service is over the family members sit down and share the delicious food together.

Korean families will also visit their ancestors' tomb stones known as Seongmyo. It is a custom to show respect and appreciation for family members who have deceased. 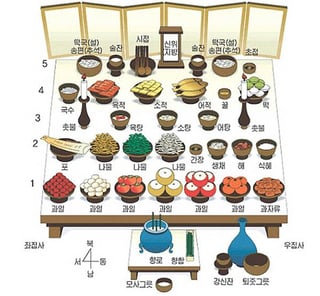 How do Koreans Celebrate Chuseok?

Koreans will eat delicious food during the Chuseok period with Songpyeon being the most famous. Songpyeong is half-moon rice cakes that are stuffed with a filling. There are all kinds of Songpyeong such as pumpkin and red bean. Songpyeon is also difficult to prepare and is carried on as a tradition in the Korean household. Usually, mothers will teach their daughters how to prepare the rice cakes for family members. 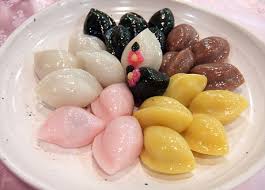 Koreans also play fun traditional games. These games include Samulnori, Talchum and Ganggangsullae. Salmunori is a Korean traditional percussion quartet that has various family members playing instruments in their homes on the eve of Chuseok. Talchum is a traditional dance which you can witness first hand at the Hanok Bukcheon Village in Seoul. 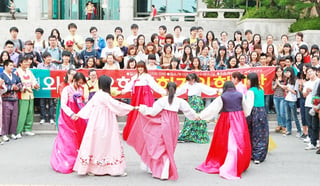 Finally, Ganggangsullae is probably the oldest tradition that dates back to the Joseon Dynasty. It is when a group of women, dressed in Hanboks, dance in a circle and sing together.

How to Participate in the Chuseok Traditions?

During Chuseok there are numerous events happening all over the Korean countryside. If you would like to experience some Chuseok traditions then one of the best places to go would be the Seoul Folk Village. At the village, you can participate in kneading the dough used for Sangpyeon or dress up in a traditional Hanbok. There is often Talchum dances and Korean wrestling matches too. 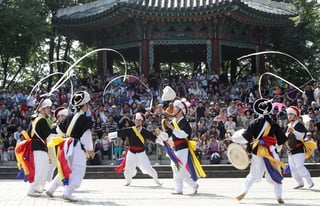 There is also the Namsangol Folk Museum that hosts traditional dances over the Chuseok vacation. They also offer Hanji, which is Korean paper-making crafts, and you can even create your own family stamp or make a traditional Korean fan.

If you are up for a challenge then there is tight rope walking at Gyeongbok Palace and a Lion Play that shoos away all the evil spirits.

I hope this blog give you a better understand of one of the biggest holidays celebrated in Korea.