My transition to teaching for ChungDahm in Gangneung has been quite exciting.  Gangneung is a sort of small city nestled in between mountains, and up against the Pacific Ocean. It is 168.34 kilometers from Seoul. In addition, it is also a city that will host a few Olympic events come February. (I am going to be going to one: a hockey match between Russia and Canada.) It’s busy and bustling, and there is always something open, and something to do and explore. Personally, I live within a five minute walk to downtown, and most every convenience is really close by.  Below I have provided a couple pictures of the city: 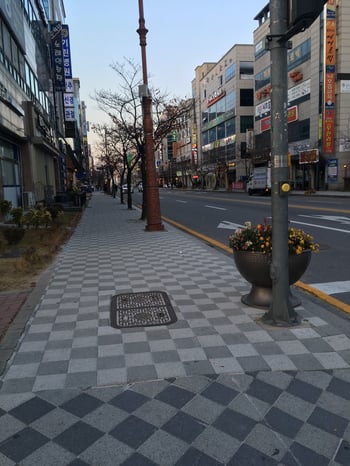 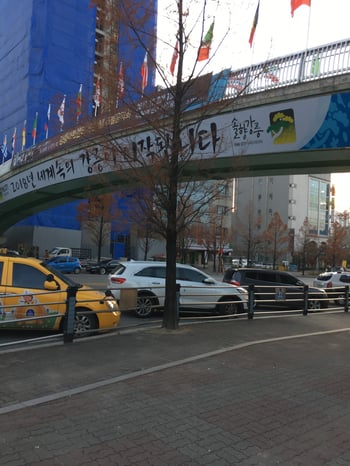 Me and my fellow teachers live in an apartment complex that butts up against a mountain park that rises up into the middle of the city. It’s an ancient looking park, with fabulous pine trees (as this is known as the “Pine City”), and several trails, that people can be found to be walking in the wee hours of the morning. The park itself is even home to a middle bronze age site, which makes the historian in me have way too many questions about what the site was and what happened there….ah, but I guess that’s for later on in the term. 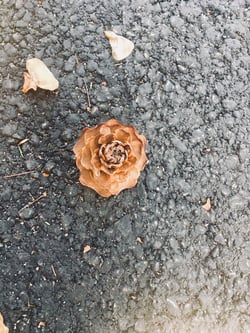 (one of the many pine cones in the "Pine City")

I have an autoimmune disease, and as such,  have a highly restricted diet, and my family back home in the states was more than a little worried about what I would eat here in Korea and whether or not I would be able to find food for myself. However, that has not been a problem. The local shops, grocery stores, and even the little local church I have found provide all kinds of creative options for me to enjoy. One day at church I enjoyed “original kimbap,” (pictured below) which I learned is a combination of the words for seaweed and rice. The "original kimbap" was a combination of a salted seaweed wrap with rice, kimchi, and spinach, and was quite tasty. 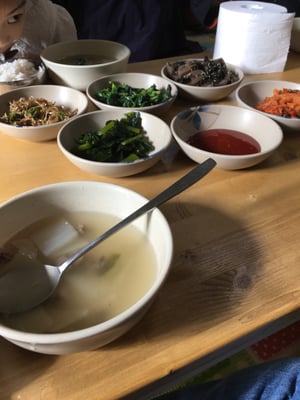 The branch of Chungdam in Gangneung is fairly small, just me and two other teachers, but everyone is super supportive of each other, and the students are curious about so many things. One of our teachers is from Canada, and the other from Chicago, and we all get along really well.  Also, the students keep us laughing, and sometimes guessing as to what they will come up with next.  One such instance of this is when one of my students drew the picture below when they were learning about political satire. 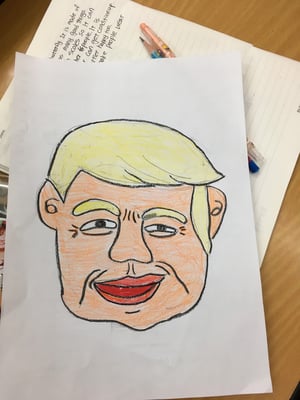 The students I teach range from elementary school to middle school. We are doing V1 this term, which focuses on a literary work and is based in discussion around it. Some of the students are really into the stories, and I hear a lot of “Oh, Teacher! So sad!”  and “Oh, Teacher this book is so funny!”  Also, within just a few weeks of being their teacher I got to know a lot about the students and their lives along with various Korean customs and traditions. For example, the Korean people bury their dead outside the cities in the mountains (this came up because one of our characters in the story went to a cemetery).

There are many differences between South Korea and America. For starters, CU is a convenience store, that is actually quite convenient. There is one less than a kilometer from the apartment and I can do more than half of my grocery shopping for the week there. I’ve found shampoo, toilet paper, yogurt, rice, tuna, strawberries, chicken, and tons of kinds of candy all in the little store. In addition, there are several stores that are American that have popped up here in Korea, but they are quite different. I walked into a Starbucks (pictured below) and spent about five minutes being a tourist: mouth open, walking in slow circles, and taking lots of pictures. There is a drink that they have that is peach, holly, and rosemary, which is both sweet, warm and savory. I also happened into a Krispy Kreme (pictured below) and even though I couldn't indulge due to my dietary restrictions, I still took way too many pictures of the tiny little artistic masterpieces. 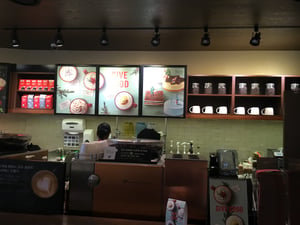 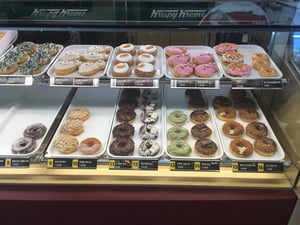 Google translate has been a best friend of mine, and has helped me communicate in many circumstances. Since currently my Korean is limited to “Hello!,” “yes,” “What?,” “Thank you,” “God,” “why?” and “really?” Google translate has been a super helpful tool to keep in my back pocket. In addition, having Google Maps has been helpful as well. I have been able to plug in my address, and when I find a taxi am able to turn on navigation and make my way back home.

Ah, there is so much else to say, but that’s probably good for now! Talk to you all later!