Learn about Living in Geoje from a Veteran ChungDahm Teacher

My name is Benjamin Kelsey and I’m from Chicago. I graduated from Olivet Nazarene University in 2014 with my degree in Elementary Education. Upon graduation I wanted to go to live and teach in Korea because I had never travelled anywhere before and my wife Jessica told me about the possibilities of working with Chungdahm. After applying and interviewing through Aclipse, I eventually received a contract to teach for ChungDahm and in November of 2014, I moved to Geoje with Jessica and we taught English together at the Geoje Chungdahm campus. and lived there for a year.

After moving back to Chicago for year and half, my wife and I became bored and we yearned to go to Korea to begin teaching again.  After applying through Aclipse again, we recived contracts this past May to work for ChungDahm at their Seodaemun branch in Seoul.  While we love living and working in Seoul, we wanted to make you all aware of the amazing year we had living on Geoje.

Geoje is an island just off the southeastern coast of South Korea. It is about an hour from Busan by bus. Living there was a really great opportunity. My wife and I really got a good taste of rural life in Korea while at the same time being close enough to major cities to experience urban life. Geoje itself is a beautiful place. There are a lot of mountains, hiking trails, beaches, and opportunities for shopping and eating out.  Below is a list of our favorite activities and places to visit on Geoje.

Windy Hill is a beautiful cliff peninsula that gives an open view of the ocean. It has a park area with a lot of benches for seating, restaurants, and a windmill that seems to be a very popular photo opportunity. You will see a lot of couples and families here all taking pictures with selfie sticks. There are also a lot of options for food here, ranging from street food stands to sushi restaurants. 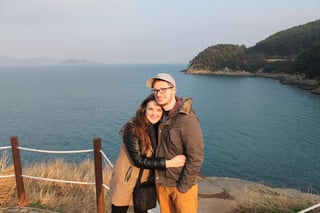 Okpo is Geoje’s foreigner paradise. A lot of foreigners work in Okpo - most of them build ships in the shipyards. It follows that there are a lot of foreign comforts. You can find a few foreign food marts on one of the main roads, as well as several American and European restaurants scattered throughout the town. There are a lot of places to eat, drink, and have a good time with plenty of other English speakers. One of our favorite places was an Irish pub called Jungle that often had live rock music playing. (And they served a really good shepherds pie!) 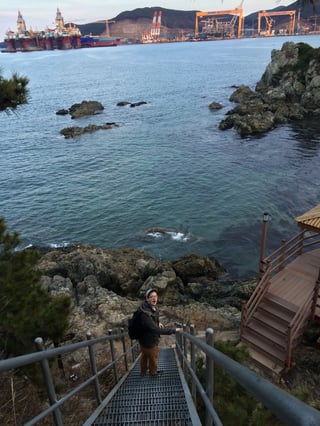 On Geoje, there are many beautiful places where you can enjoy nature, but one of the best spots is a camping ground at the bottom of a waterfall.  At the Mundong Waterfall, people literally set up tents on top of a stream. There are little wooden platforms above the water that you can camp on. You can hike up to the top of the mountain and stop on the way at several restaurants. We once stopped and had some Korean BBQ while looking out over the valley. 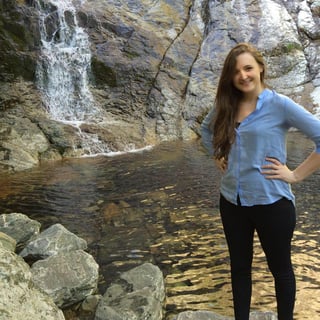 Gujora Beach is the best spot in Geoje. A beautiful beach with a beautiful view. At any given moment, there will be a ton of people camping out in tents. Food is just a short walk away. And if you wake early enough (or stay up late enough), there will be a nice thick layer of fog and a few fisherman. Definitely one of the most peaceful experiences of my life. While there, stop at one of the nearby grocery stores and you can pick up some hot dogs to roast over a campfire! 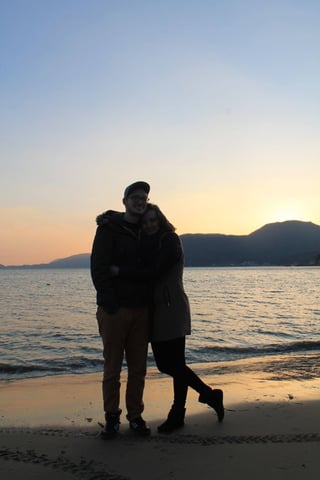 Gohyheon is the biggest downtown area in Geoje. There are a ton of options for restaurants, shopping, entertainment, and more. There are often live performances outdoors, featuring K-Pop groups, dancers, and bands. There is also a CGV movie theater, a HomePlus grocery store and a shopping mall. Wy wife and I spent countless hours walking along the oceanside from our apartment to the Gohyheon area. In particular, there was a really great Korean-Italian fusion restaurant called Ottos that we frequented. Their specialty was bulgogi salad.

Tags: living in Korea, things to do on the weekends, Weekend activities in Korea