Annually Koreans celebrate their New Year, Seollal. The holiday falls on different days each year. This year the holiday is being held over January 27-29. The period is decided according to the Lunar Calender.

Seollal and Chuseok are two of the biggest holidays in Korea where millions of Koreans take time off to travel to their home cities to spend time with their families. The Western equivalent would be Thanksgiving and Christmas. Seollal is very traditional with various associated foods and activities. Our students usually get money from their parents, aunts and uncles and Koreans festively say  to one another 새해 복 많이 받으세요 (sae hae bok manhi bah doo seh yo) – which means “Happy Seollal.”   This blog will help explain the customs and traditions of Seollal, so you will have a better understanding of the holiday when you are teaching in Korea. 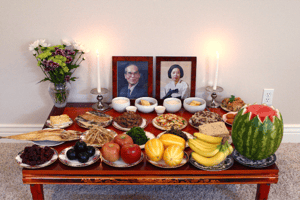 At Chungdahm Learning, it is a time when academies are revising make-up classes, so that faculty and staff could get some days off. At Songpa Branch where I work, we are working a Saturday and Wednesday before Seollal, so that we can enjoy a relaxing 3 day weekend. If you are lucky, your Branch Manager might decide to give you more days off without making up the hours. This happens on the off-occasion. Teachers also get gifts from the company. Over the years, I have received movie tickets for two and delicious Chilean wine.

Seollal is the first day of the Korean Lunar Calendar. It is one of the most important days in Korea and falls over three days. There is the day before, the day of, and the day after. The day of Seollal is January 28th this year and Seollal is known as  음력 설날, Eumnyeok Seollal, which means it falls on the Lunar calendar. 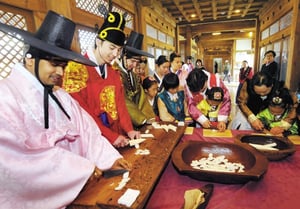 Korean New Year occurs during the winter solstice after the second new moon and on the rare occasion the third new moon of the year. Korean New Year is commonly the same day as the Chinese New Year, but sometimes a day after because of the differences in calendars and time. If the moon is an hour ahead of midnight, they will happen on different days.

Korean New Year can be traced all the way back to the Joseon and Shilla dynasties, where palaces celebrated New Years with the various customs and traditions incorporated in current times.

What do Koreans do?

Koreans travel to their hometowns to visit family members, including grandparents and in-laws. It is considered respectful to partake in the holiday, so many Koreans living abroad travel long distances to share this time with their relatives and catch up on their lives. 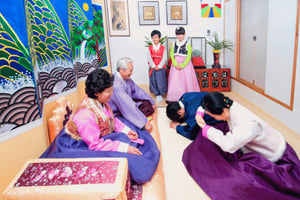 Seollal is a costly vacation as Koreans are expected to wear new clothes and prepare food and gifts.Traditional food preparation is the most important activity that happens, as the host needs to provide food for all family members visiting. Koreans take a lot of pride in their food preparation for this event.

Koreans also may wear Hanboks. Hanboks are traditional Korean clothing that is very colorful and artistic expertise is needed to design them. In recent years, Hanbok designers have gotten more recognition from fashion experts worldwide, for their intricate designs and beautiful aesthetics. 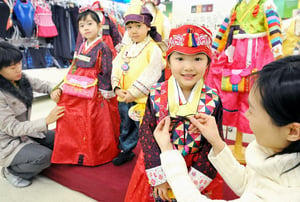 In the morning of Seollal, Koreans pay respects to their ancestors by bowing in-front of a table filled with traditional food. The food is specifically prepared as an offering for their ancestors. At this time, Koreans will also pray for their family members well-being.

Seollal is a time to eat two of my favorite Korean dishes, Tteokguk and Manduguk. The two dishes are perfect for the Winter season, since they are prepared as a warm soup. If you would like to try a bit of both, find a restaurant that prepares Mandu Tteokguk – this is a half/half bowl mixed with both. It’s pretty delicious! 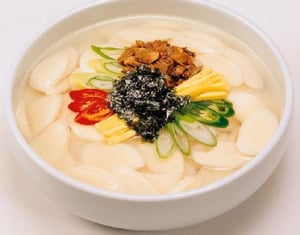 Tteokguk is a clear soup that has round pieces of rice cake in it. According to Koreans the whole country turns one year older during Seollal, and traditionally you have to eat a bowl of Tteokguk to complete the process of turning a year older. It is usually served with a beef broth, some pieces of fried egg and seaweed. 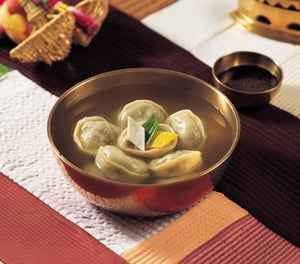 Manduguk is similar to Tteokguk except it has 5 or 6 mandu (dumplings) inside of it. The mandu just falls softly apart, after being steamed inside the broth. It really is so tasty and some Koreans add some Gothchujang (red pepper paste) to it, to give it some flavor. It is served either with a beef broth or anchovy broth. The mandu will be a mixture of minced meat, tofu, vegetables and sometimes kimchi. The mandu itself is handmade using wheat, buckwheat and flour.