Growing up in Los Angeles, I’d  consider myself very health conscious. There is a range to this. LA health can become a parody of itself, with twelve dollar activated charcoal juice and any vegetable you can imagine being “massaged.” Yoga studios charge exorbitant amounts for classes that make you wonder how aligned the practice is from the place it was created. But for each absurdity you encounter when it comes to wellness, there is also gold. While raised in a predominantly Asian and Latinx neighborhood, there was a fruit stand each direction where I could buy a mango bouquet drenched in chili powder and lime as well as decades-old family run acupuncture studios passing down the stunning tradition of cupping therapy. I had the privilege of having access to so much greenery, with mountains skirting through the city, with countless breathtaking hikes that jumped out at you from the freeway. I’d run through the mountains as frequently as I could, so when I got to South Korea, I knew Bukhansan National Park would be my friend. But I was wrong.

Let me provide some more context for what hiking entailed for me in California. Although there are definitely strenuous trails, the ones you’d do on a weekend usually have well-worn dirt paths carving throughout, and you can schlep on the ratty shirt you got at your college spring carnival and sweat through it. You’d reach a view and see the expanse of the city and you’d hopefully have enough energy to breathe and take a photo at the same time. You may get sore for a few days after, but the endorphins sing you to aching sleep. That’s what I’d call a hike. 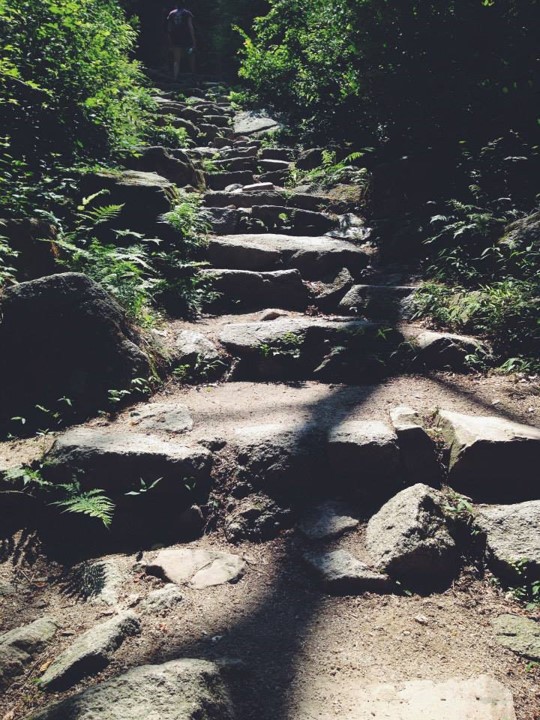 After a month settling into Seoul, I decided to meet up with my fellow teacher who was working in Incheon. This was the first time we saw each other after passing training, so we figured movement would do us good after a month of dakgalbi with cheese and lesson prepping into the late night. Bukhansan translates to “mountains north of the Han River,” and half-way into our excursion, I wanted nothing more than to be somewhere very south, very submerged in water, preferably a pool. We met on the subway and chuckled a bit at the elderly people decked out for what looked like two weeks in the Himalayas: 35 liter day bags, neon visors, mesh orange vests, zip-off cargo pants, and hiking boots chunkier than the granola I thought would suffice for the day. My friend and I had bicycle shorts and busted Nikes, and that contrast should’ve been the tell-tale sign. From the subway exit to the entrance of the park, shops lined the road, filled with the all gear you could imagine, from steel walking sticks to sleek selfie sticks. Instead of the fruit person who’d sell you coconut water in a plastic bag in LA, people stocked up on kimbap and boiled eggs. I saw stands of people frying up hodduck, a sweet pancake stuffed with brown sugar, cinnamon, and chopped walnuts or peanuts. I was ready for a day of fresh air and fall leaves, a reprieve from flashing neon lights I was accustomed to in the city. 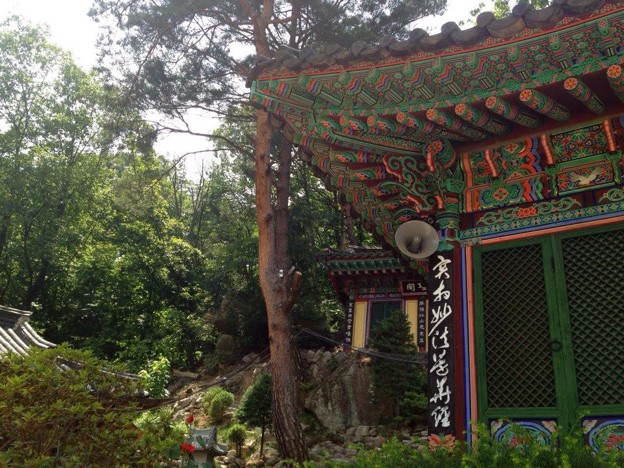 My friend read a blog somewhere that described a peak of fertility that we wanted to tackle, but somehow, and I really don’t know how, we ended up climbing the highest peak in the park. The beginning was easy, and it was incredible to see the smooth stone cascading the mountains, with streams winding down it.  Groups of people would set up chairs and snack on jujubes and corn silk tea, and play music from pocket radios, such a beautiful image of a Sunday well-spent. But then it got harder. And then harder. I started scratching my head at myself, as these groups of people raced by us in droves. These people ranged from young children to people in their eighties. An hour in, two hours in, three hours in. I began to question everything about myself, doing an in-head WebMd survey, asking, am I actually healthy? Were those leisurely strolls back home a figment of my sweaty imagination, or had I actually ever hiked before? The answer to both those became hard no’s. How did all these folks leap from ridge to ridge while me and my friend’s hamstrings begged for a Kakaotaxi to the jimjilbang? For the first time in my life, I contemplated turning around early and doing just that. The funniest part was the kind people who probably saw the looks of misery on our faces, reassuring us that we were almost there, when we most surely were not. 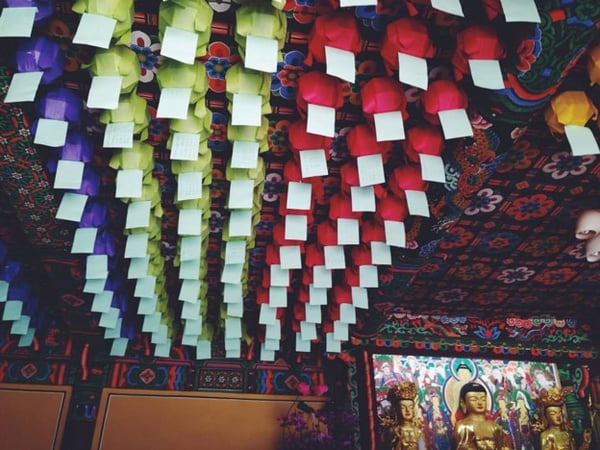 As we got closer to the top, I was shocked to find steel ropes edging across, clinging onto them because one slip seemed to secure sudden death. This is not hiking but light mountain scaling in my book. At one point, or actually it was many, many points, I was walking up the slope using my hands. I’d like to call this moment of desperation ingenuity. What we saw in front of us was like nothing I’d ever seen before, deep grey rock with lush forest for miles, that was enough of a postcard that it almost convinced us “almost” was close enough. But I could hear the energetic students I taught in my head saying “fighting!” So we trudged forward and I’m so glad.

You can see everything from Baegundae Peak. Tiny cars flitting through the giant boulevards, apartment complexes jutting to the sky like bamboo, and the secluded temples dotting the mountain range below created one of the dreamiest visions I’d ever seen.  We whipped out the selfie-stick and documented as much as one could capture on film. The sky clouded over and started to drizzle on us, gifting us with some coolness to assuage the late summer mugginess. After an hour or so at the top, we started making our way down. 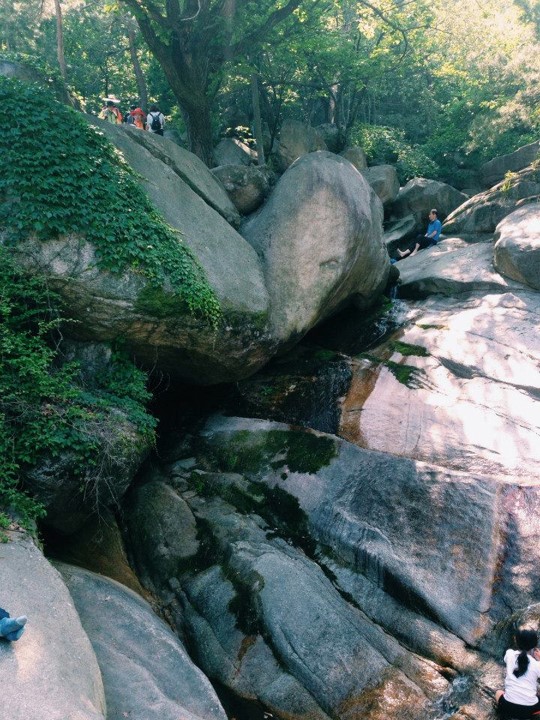 A friendly person told us we could take a short-cut that would drop us at an entrance after forty-five minutes. Somehow we ended up getting lost, and in terms of pain, was even worse than the incline as our feet were pounding hard on the rocks, trying to maintain balance. We ended up discovering more temples and fortress walls, but after the first hour, I never wanted to see a mountain again. Except we did, for another hour, and then another hour. Finally, after three hours of dragging our feet out of what seemed like the most giant escape room known to man, we made it. I was in so much pain going down that I walked backwards like a fool to cushion my joints. We just kept asking ourselves, how did that just happen? I literally blocked the hike out of my head, not talking about it for weeks, and not going anywhere near a mountain except for the slope on the way to work for six months. 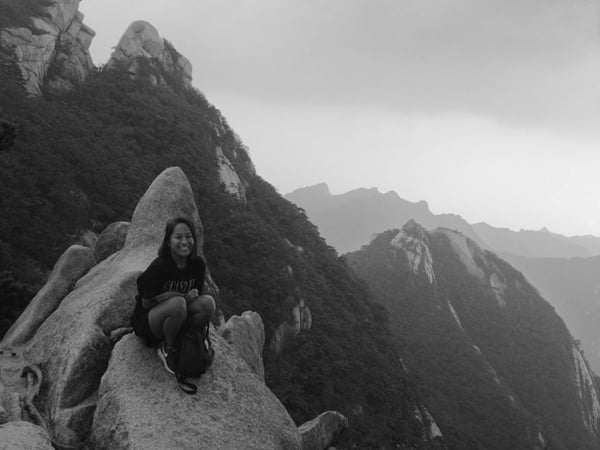 There were many lessons learned. Bukhansan has a magic energy, and if one is able, it’s something to not be missed when in Seoul. There are few other places I know like it, a shangri-la in the middle of one of the most densely populated cities in the world. Don’t underestimate anything about it, especially the necessity of gear and supplies you’d think were a bit overboard. When I go back, I’m training for a month straight beforehand and bringing a phone loaded with the most thorough running playlist in the world, because this mountain will require your best self, but will give you so much in return. 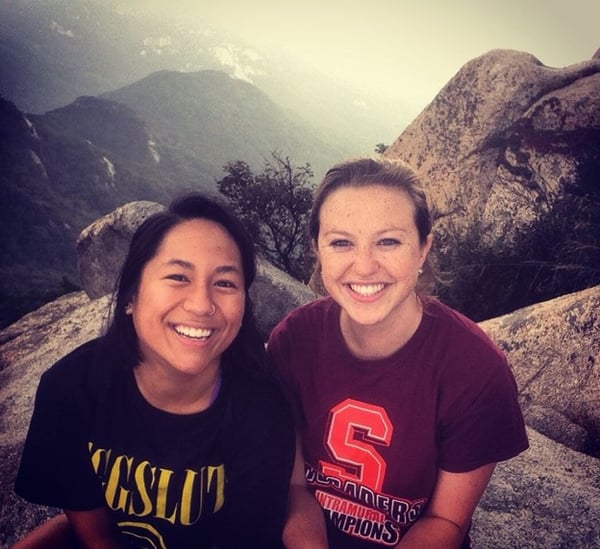