Like Movies? Read About Linda's Trip to the Busan International Film Festival

This year marked the 22nd annual Busan International Film Festival (BIFF) in Busan and as a movie lover, I was so excited to get to experience such a massive and unique event. The purpose and beauty of BIFF is to introduce new independent films and directors. Primarily, the movies are made in Asia, and hundreds are featured each year.  If you are a movie lover like me, then I highly recommend you attend this festival during your time teaching in Korea.

This year the film festival took place from October 12-21 and 298 films from 75 different countries were screened. During the days BIFF takes place, tens of thousands of people will enjoy the event. So far, the 20th Busan International Film Festival attracted the most people, with 227,377 participating guests over the course of 10 days. It's quite impressive and, to my relief, so well organized. Similar large events that I've been to in the past (pre-Korea) have been quite hectic and disorderly. But the many staff members helping people snag their tickets maintained order, and Koreans in general I've noticed are keen on doing things in organized ways. I mean, it makes sense right? 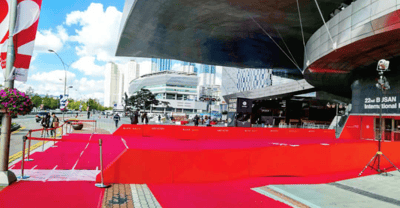 You have the option of ordering your tickets a few days before the start of the festival and eighty percent of tickets are sold online. I chose however to just show up early at the theater and buy my tickets when the booths opened, which worked like a lottery system. You wrote down what movie you wanted to see, and if there was a seat available, it was yours. What is especially wonderful is that each movie is 6,000 won or the equivalent of about $5. So even if you choose to see a few movies, you're not breaking bank.

The event was a great time and I am glad I went.  If you can't attend the Busan International Film Festival during your time in Korea but still want to see some movies in my spare time, continue reading my blog as I go into depth about the movie going experience.

Going to the Movies in Korea

Over the past two decades, Korean films have been receiving more recognition internationally which has caused the film industry in Korea to grow. In particular a popular Korean film that recently received accolades internationally was Train to Busan and the Netflix original, Okja, also drew many Koreans to the theaters.

Although Korea limits the number of foreign films that are screened each year, in recent years after negotiation, Korea has limited the number of domestic films to be screened so that more foreign films receive showtime. Limiting domestic films actually caused an uproar among Koreans in 2006, since Hollywood was taking over the movie industry and obscuring other countries' movies from being seen.

If you do plan on going to the movies during your time in Korea, be sure to go to cineinkorea.com which shows the current movies in theaters all over Korea as well as show times. As is evident from the site, there are a good number of Korean films always showing. You can also purchase tickets on the website, and there are also a couple of apps that you can download and buy tickets from as well, like Lotte Cinema and CGV.  One thing of note is if you are interested in seeing a foreign film in Korea, such as those made in your home country, the majority of the time they are in English with Korean subtitles.

Finally, movie theater snacks are much like in the U.S. but of course with some major Korean twists. For example, I've seen popcorn with squid/fish seasoning as well as squid itself! There are also pretzels and some candies (though for the most part a smaller selection).

I hope these tips have been helpful for those who are new to Korea and wanting to catch a movie during their down time.