Happy New Year from South Korea!  Despite not being a night creature, the motifs have always appealed to me, and Korea delivers. The liveliness, the nonsense, the spectacular karaoke called norebang, the palm-readers, the game rooms or PC Bangs—the possibilities are limitless. But what can I say: even with all the excitement, I enjoy earlier evenings. However, to welcome and further solidify my coming year living and teaching in Korea, I decided I was going to honor New Year’s Eve as truly as possible.

When I was invited to see the Bell Tolling Ceremony in Yongdusan Park in Busan (to literally ring in the New Year) I couldn’t say no. An eclectic array of musicians covered music by Gloria Gaynor, Santana, Bruno Mars, and heaps in between. Hundreds of cheerful people stood in Bell Pavilion, with a brilliantly lit Buddhist temple in the foreground and Busan Tower standing proudly in the background. 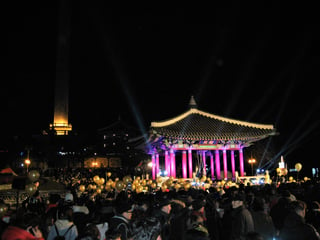 Most people held yellow balloons, with personal resolutions written on them, ready to be brought to fruition. I’ve read that yellow is one of Korea’s five cardinal colors and symbolizes good luck, safety, nature, and grounding. How appropriate. Before I knew it, the bell was rung and the countdown began. The stellar light-show, confetti, and fireworks proved 2017 was very welcome. Everyone released their balloons and hundreds of yellow hopes filled the sky. 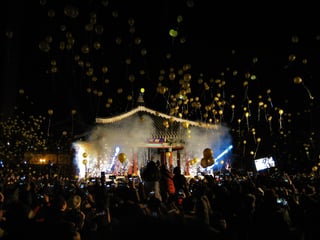 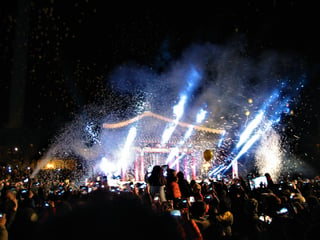 But the festivities were not over yet…and honestly, much to my dismay. Clarification: it was very, very cold. However, I’d already promised my friends I would exalt the New Year and stay up to see the New Year’s Sunrise event at Haeundae Beach. So, make sure to dress very warmly if you’re plan is to stay out all night in the winter. Between midnight and sunrise, we dined at a pizza place, shared our 2017 ambitions, and played games at a coffee shop. We all opted for caffeine rather than alcohol, which was probably a great idea considering how difficult it was to stay awake!

But soon enough, thousands of people began assembling in the early morning, around 5:30 am. Really, thousands; and most were holding red balloons this time. The color red, another cardinal color in Korean culture, often symbolizes passion, so perhaps the red balloons signified everyone’s zeal and excitement.  It was one of the most captivating things I’d ever seen. What surprised me most was the orderliness of the event. Despite the masses, people formed organized lines to get free cups of coffee or tea and hot rice cakes provided by the festival’s crew. I hope to always remember the calm of it all. Everyone was still moving quickly and talking to family and friends, but the overall sensation was an unexpected calm, almost somber. Maybe it was just too early. 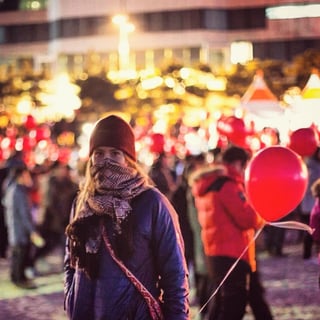 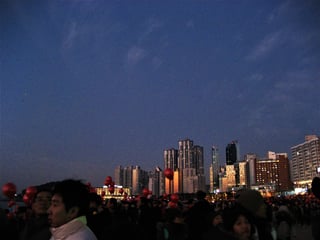 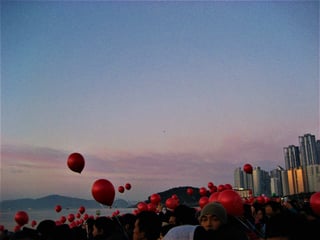 But this calm turned to reverence as the sky brightened and the sun rose for the Year of the Rooster, for the very first time. Everyone released their balloons at sunrise, just as they did the yellow ones at midnight, and everyone seemed solemnly happy. I’m really struggling to describe the emotion, as you can tell. Perhaps there were too many. 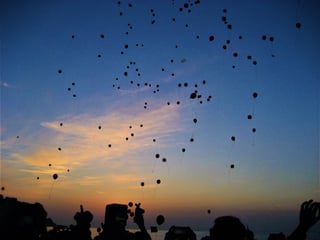 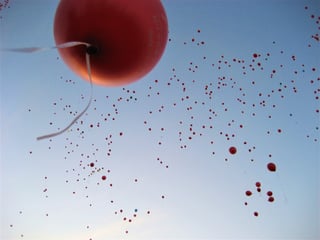 A man saw me photographing the sun, and he said: “Wait to take pictures in 15 minutes. It will get better.” I smiled and said I would take pictures then too. Well, I waited, and the sunrise didn’t get any better. I believe the story provided the metaphor by which I hope to live this year: Don’t wait for a “better.” Be grateful for what is here now. 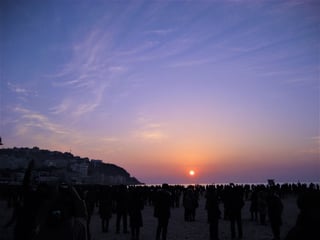