Save Money and Eat Well When You Teach English in Korea

When I was in my final year of university in Ireland I had decided that I would like to travel. I wanted to see Asia in particular, as I had not been there before. I wanted to see as many countries as possible, for as long as possible. So I thought, what better way to travel than by teaching English abroad. Then I saw an advertisement on my university job board to teach English in Korea. I had never even thought about visiting South Korea when I was looking into traveling.  I had looked at Thailand, China, Japan and even Malaysia but not South Korea. One year later on I can honestly say it’s been one of the best decisions I have made in my life. South Korea is an amazing country, not only is it an ideal location to teach English, but because of  its location you can travel to almost anywhere in Asia with ease, something I have taken full advantage of this past year. This blog will give a brief summary of some of the best thing about being an English Teacher in South Korea.

Compared to Ireland (my home country), almost every country is cheaper to live in; however, South Korea is ridiculously cheap. Not only is grocery shopping cheaper, but utilities such as internet, electricity, gas and mobile phones are all so much cheaper compared to Ireland. On average my electricity bills are around €7 per month, my gas bill is usually €15 - €20 per month and my phone is around €22 euro (which includes the price of the phone Samsung Galaxy s5 data, texts, and phone calls). This means that you can have a good standard of living in South Korea while teaching English and still save money or pay off those student loans. 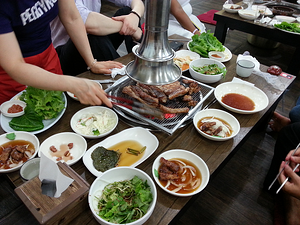 The food here in South Korea is amazing. There is so much to choose from and most if it, thankfully is really good for you. Not only is most the food good for you, but the food also tastes amazing– from the Kimchi to the mandu (traditional Korean dumplings). Koreans, like Irish people love soups and there are many varieties here. They usually always contain meat and are often spicy, which I love. They have a soup here called Gamchatang which is  very much like Irish stew as  it contains pork back bone, potatoes and lots of vegetables, but unlike Irish stew it’s accompanied by a bowl of rice. One very popular snack in South Korea is fried chicken as it is everywhere. It comes in many flavors from soy sauce to garlic to sweet chilly and you will be drawn into its delicious finger-lick'n-goodness if you come to South Korea, whether at a baseball game or for an after work snack.

Finally, you have the Korean BBQ. In Korea they love barbecuing and they have many different meats to choose from.  The most popular is pork and if you go to a Korean BBQ establishment they usually cook the meat for you at your table.  It’s a great social experience, and something that will become part of normal life when teaching English in South Korea. I really don’t know why there aren't Korean style BBQ places in other places in the world. 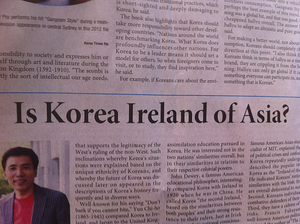 One thing I was worried about when coming to South Korea to teach English was the culture shock. My friends and family all joked with me about how different life was going to be. Well, two years on I can honestly say I am still waiting on this “culture shock”.  From the moment I arrived in South Korea I felt at ease. Yes the language was different, and sure the food was not the same, but Korean people are so caring and so nice that I felt at home here. In fact there are many similarities between Korean and Irish people. Both populations are kind, warm hearted, and both populations like to feed you.  My Korean friends are always giving me delicious food. Something that I thought was unique to Ireland, the nation of feeders. Korean people are very polite and gentle but shy at the same time. Age is also really respected here, regardless of social stature.  The older a person is, the more respect that they deserve. 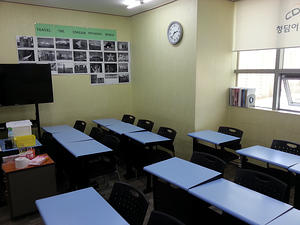 As great as the food, culture and ability to travel is in Korea, at the end of the day you have to remember that you came to Korea to Teach English.  The good thing about this is I truly love my job at ChungDahm.  ChungDahm provides you with amazing training, so even if you have never taught before you will still be well prepared prior to teaching your first class

One of the best parts about working for ChungDahm are the hours. I work on average only 27 hours per week and I get just a little over a month's worth of vacation each year. My work hours are 4pm – 10pm, although sometimes it is just 4pm – 7pm.  Each class lasts three hours which surprisingly makes the day goes by fast. The work schedules differ from school to school, as some teachers will only work 24 hours, while others will work 30 hours. This is still less than the average 40 hour full-time job you would most likely have anywhere else and the best part is you still make enough money to have fun and save.

If you are thinking of Teaching English in Asia, I would highly recommend South Korea. Not only is this country amazing, but the culture, the people and the quality of life over here is unbeatable!

Tags: teaching in Korea, applying to teach English, benefits of living in Korea