Wow. I just got back from my Chuseok vacation to Hong Kong, and I have nothing but great things to say about it. Chuseok- as you may or may not know is Korea's annual Thanksgiving celebration. During Chuseok, almost everything closes down, while many Korean people migrate to their hometowns outside of Seoul, to spend time with family. I had heard from many friends that are also teaching English in Korea that Seoul turns into a ghost town, and that there isn't much to do. Staying in Seoul didn't appeal to me whatsoever, and I immediately started scouring the internet for flight deals leaving from Incheon. Needless to say, since Chuseok is a major holiday, flight prices are not the greatest. Please, learn from my mistake: when making travel plans during Chuseok, do everything as far in advance as possible. I booked my flights about a month in advance (in a post Hweshik stupor) and could have saved quite a bit had I booked earlier on.

Regardless, I am so glad I managed to get a decent flight out of Seoul, and chose Hong Kong to explore. Chuseok spans from a Wednesday until a Friday, for a total of five (much needed!) vacation days. I took the first subway to the airport early Wednesday morning for my 9AM flight, in anticipation of how busy the airport would be. I was glad I did- the airport was absolutely bonkers between ajumma's pushing, and crazy long lines.  Take my advice and show up early for any flights departing on the first day of Chuseok. 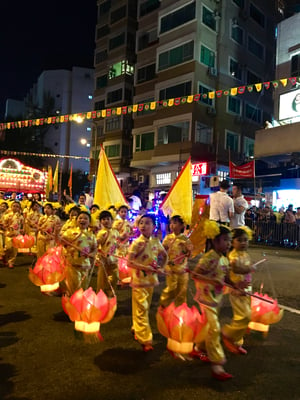 After some minor delays thanks to a typhoon set to hit Taiwan, I arrived in Hong Kong in the afternoon. I booked a hostel I found online through a website called Yesinn. It's conveniently located in Causeway Bay, close to both the MTR (Hong Kong's Subway system) as well as major bus stops. I was able to take a cheap bus from the airport to directly in front of the hostel. Super easy. The hostel itself was clean and filled with lots of fun backpackers from all over the world, and even a few other teachers from Korea that were traveling during Chuseok! After I arrived and settled in, the hostel was offering a walking tour to see a part of the Tai Hang Fire Dragon dance, which essentially was a sort of street party/parade. It was the perfect opportunity to meet other people, and experience the beauty of Hong Kong nightlife from day one. Nearby in Victoria Park, there was a large lantern display set up for Hong Kong's mid autumn festival, which coincidentally landed on the Friday of my trip! This really makes Hong Kong a perfect place to travel to during Chuseok.

After a sleep in, I enjoyed my first round of dim sum before setting out to Mong Kok to see the famous Goldfish Street and Bird garden. The Goldfish market is a street with an incredible variety of aquatic creatures in tanks and bags, all for sale. There were also tiny frogs, lizards, and turtles. It was explained to me that goldfish tanks and aquariums are a popular part of Chinese Feng Shui, as they represent all five elements, and when placed appropriately can bring good energy into ones home. The Goldfish Market was stunning, albeit strange, and I definitely had the urge to purchase a bag for myself. Nearby is the Yuen Po Bird Garden, where old Chinese men bring their bird collections to show off to whoever may be passing by. The Bird Garden is a quirky area I recommend checking out. I got to chat to some parrots and watched a man do some tricks with his bird collection. A must-see! 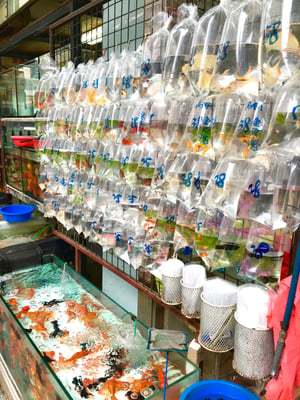 After more adventuring around Causeway Bay, and some classic Hong Kong fish ball soup, I attended a pub crawl with a bunch of people from our hostel, that went through Lan Kwai Fong, a nightlife district. LKF was dedicated to hawkers prior to the second world war, but has since turned into a bar street. During the pub crawl we kareoke'd, tried different types of liquor, and just soaked in the atmosphere of Hong Kong while people watching. There is so much to see! I've heard that a New York minute is a Hong Kong second, and that felt so true during my time there. If you are into partying (ha!) LFK is a must when traveling to Hong Kong. 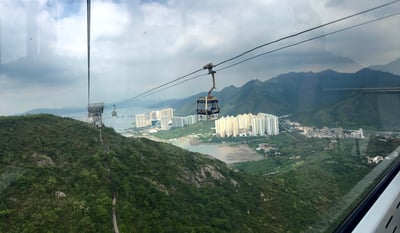 The following day I headed to Lantau, to see the Tian Tan Buddha- also known as the Big Buddha. The bronze statue is located in Ngong Ping, on Lantau island (Wesntern Hong Kong). While the statue isn't very old, it was erected in 1993, it is a well known tourist attraction that is well worth the trip over to see. Getting to Ngong Ping is half the fun, as there is a cable car that provides stunning views of the island, as well as the surrounding area. The ride is 20 minutes, and takes you through stunning scenery and breathtaking sights, while providing a glimpse at the Buddha from afar. I believe it is the top tourist attraction in Hong Kong and after going I tottally understand why. 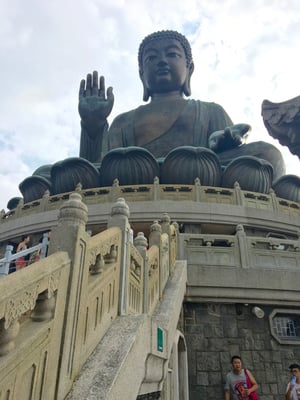 After some more fun and another night in LFK, I set out for some won ton soup before taking the MTR to Tai Koo to see the Yick Fat Building. The Yick Fat Building is one of Hong Kong's many high rises, that demonstrate just how overcrowded the city really is. It was once thought to be one of the worlds most densely populated living spaces, however it was impossible to find out exactly how many people lived within the buildings. Staring up at the massive apartment complex gave me one of those "traveler" moments where I felt just how different my life is from those that surround me. The Yick Fat Building left me  speechless.

Another highlight of my trip to Hong Kong was experiencing Victoria harbor both during the day and night time. I took the popular Star Ferry from Wan Chai (Hong Kong Island) to to Tsim Sha Tsui (Kowloon), which took about 10 minutes, and gave a great view of the harbor, as well as a refreshing breeze. The Star Ferry is easily accessible on either side, and is popular at night time around 8 PM, to catch the Symphony of Lights- an evening light show displayed in the harbor. While I thought the light show was mediocre at best, I was majorly impressed with the nighttime view of Hong Kong Island from Kowloon. The buildings are lit up beautifully at night, and the classic Chinese Junk Boats sail through the harbor, lit up in red. So beautiful. 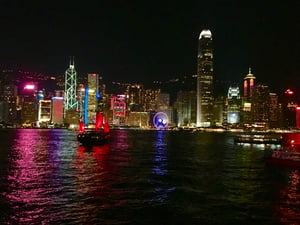 After more food (I could honestly write an entire blog post dedicated to Hong Kong's delicious egg tarts, dim sum, won tons, and noodles), I got a painful massage and headed to bed before my flight home. The entire trip I was enticed by the prices of the massages, as well as by my sore muscles. Hong Kong has lots of massage places. Do not choose reflexology. I repeat do not go for a reflexology massage. I suffered through about 45 minutes of intense pain that was thankfully cheap. I'm not sure if appreciating normal is the point of reflexology massages, but it was anything but relaxing!

Hong Kong is such an amazing place in so many ways. The blend of cultures, fast pace of life, and mouth watering cuisine make it a dream destination, and definitely a country I will travel back to. There's a certain energy in Hong Kong that reminded me a lot of New York, and I found the contrasts between cultures, buildings and people endlessly fascinating. Another great thing about Hong Kong is that it is surprisingly affordable. Transportation and food within the city are cheap, and it is possible to find decent accommodations at many different hostels. If you haven't yet, make sure to put Hong Kong on your list of countries to travel to while teaching abroad in Korea!