Pilipino people are famous for having an ungovernable amount of pride. From each mixed European Miss Universe, to the screams I heard from the neighbors during any Pacquiao fight,,,not to mention the screams coming from my 4’9” grandmother, to that random shopper your parents run into at the Vietnamese grocery store, pinoys love being pinoy. It is with a sad heart that I must tell you that I....am no different. Anyone who knows me knows I’m a walking blow horn spewing out facts about the health benefits of calamansi and how the inventor of the modern yo-yo was a Pilipino-American. 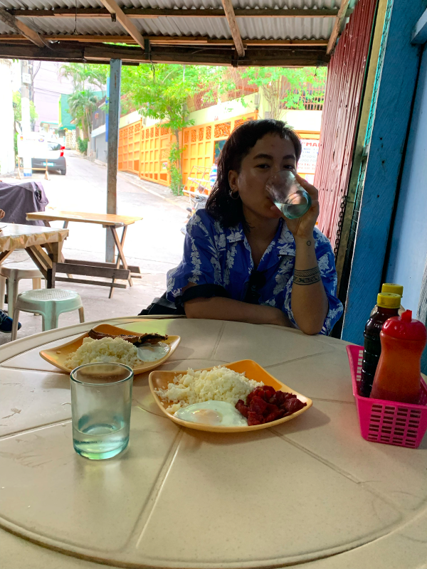 One distinct difference I’ve noticed in a couple of years living here is the rise in Pilipino culture in Korea. From incorporation of culture in K-dramas to my shock at discovering that calamansi flavor is now ubiquitous in the convenience store juice aisle, there is a lot more dissemination within the country. It makes it much easier for me to feel at home, as I know that if I am in dire need of sinigang (savory and sour tamarind stew), I can go to not only the Sunday market in Hyewha, but also this small restaurant and grocery store by the embassy in Haebangchon. 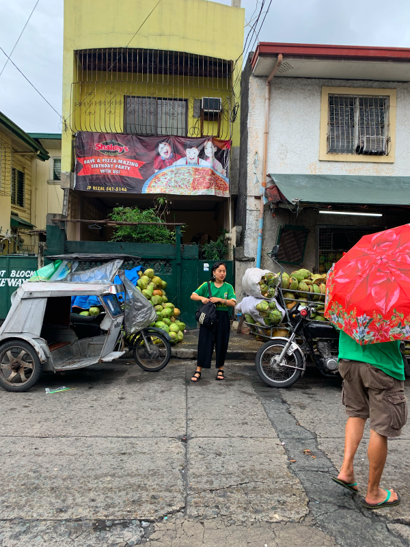 But no matter how much I appreciate my mother sending me care packages of shrimp paste and canned jackfruit, there is nothing like being there. I have had the immense privilege to be able to sustain long term travel for many years. Due to my job at Chungdahm, I’ve saved enough and have been to more countries than I ever thought I’d be able to see. But there really is no place like home. So when the time came for me to take my week long vacation, I knew exactly where I was headed. I spent a few days in Manila, then I booked a flight to Dumaguete with Cebu Pacific. If you book early enough, there are good promos, so keep an eye out. If you have more time, you can also commute using buses and boats depending on which province you’re coming from. The flight was a cool hour and a half, with views of the islands below.

From Dumaguete airport, I took a tricycle ride that was about fifteen to twenty minutes to the Dumaguete market. The Philippines is a mecca for fresh produce, with unlimited coconut water, but due to weather issues like typhoons, more remote provinces are sometimes short on fresh food. I wanted to be safe, so I picked up bunches of eggplants, jackfruit, mangoes, okra, and spices so I’d have enough to cook in my airbnb. After the market, I walked towards the Dumaguete port to get a ferry ticket for Siquijor, Siquijor, which is the main port of the island. Ferries run every hour to two hours, so you can book a ticket early in the morning and grab some food at the little cafeterias lining the dock. Keep in mind that the boats come in different sizes, so others may trigger seasickness, especially the smaller ones. I always keep a plastic bag and some tiger balm with me, and you can also take a motion sickness pill like Dramamine thirty minutes before boarding to be safe. The travel time is about one hour, and your view is not too shabby, with Cebu and Bacolod resting on the horizon.

Once you get to the port, you’ll have many Kuyas (name to address masculine people older than you, of both the same generation or older) offering to take you on a tricycle or habal-habal, which is a motorcycle, to your destination. They will also offer to be your tour guide for the duration of your time on the island.  I met Kuya Danny and he became my unofficial guide for the next five days. With travel in the islands, you can book in advance, but it’s just as easy to show up and find a guesthouse or hostel when you arrive. The kuyas will take you around to different places so you can see what you like. In Siquijor, most of the lodging is in San Juan. Keep in mind that many places are basic fan rooms, with AC rooms being more expensive. However, I never felt a need for AC as the wind outside does it with ease. I wanted to be further from the hubbub, so I booked an Airbnb in Lazi, which was amazing. I had my own guest house overlooking the ocean, and they offered me fresh fruit, bread, and coffee upon arrival. My favorite part was the fuschia hammock right outside. My house even took me on his motorcycle to the entrance of a secluded beach. I spent the whole first day swimming without a person in sight.

Kuya Danny picked me up early the next morning and took me to a secluded beach I don’t even know the name of. I spent the whole morning in a cove with the clearest waters I’d seen in a while. To my surprise, many of Kuya Danny’s friends were around the corner having a little get together. He told me that every Wednesday, they all come to this beach to barbecue, drink, and swim. They generously invited me to join in--but that generosity is as Pilipino as dried mangoes. Pinoys will always make sure you get fed. They caught fish that morning and made a deliciously savory and tangy stew, and also made a local version of kinilaw, which is ceviche cooked in vinegar, chilis, and ginger rather than lime juice. This version was cooked in tuba, which is native coconut wine. We all squatted in the sand, eating with our hands and listening to music. 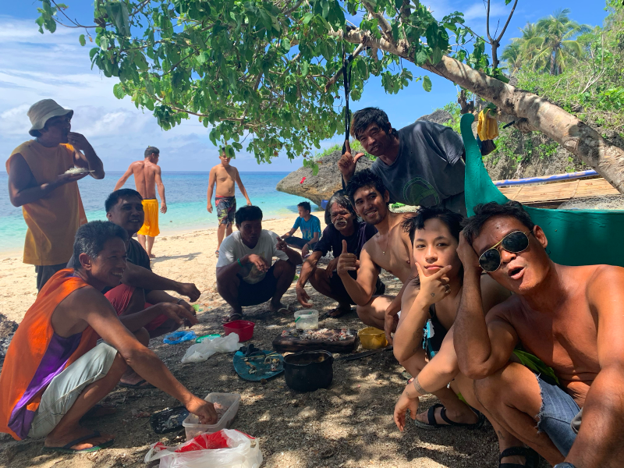 Afterwards, Kuya Danny took me to Lugnason Falls, with a peaceful lagoon in the most milky turquoise color. Many people go to Cambugahay Falls, with its cascading waterfalls and rope swing, which is just as stunning. However, if you want less crowds, I’d recommend Lugnason all the way. For dinner we stopped at a carinderia, which is like a cafeteria with cooked foods ready in heated trays. Then I headed back to my place for an early night, having the deepest sleep in ages. The next day, Kuya Danny picked me up and we went to Paliton Beach, which is the most famous beach on the island. But for good reason. Although many people can crowd it at sunset, the mornings on the further side are very peaceful, with sand that feels like flour and warm waters. I hung out with some local boys who were playing guitar and drinking rum. 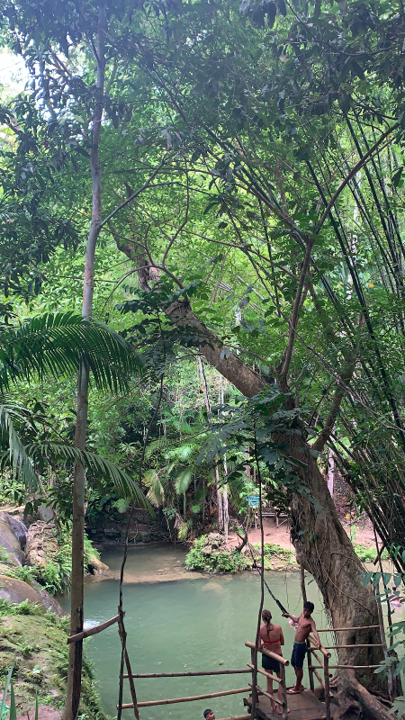 There are also plenty of beaches where you can go snorkeling for a small fee, and then there’s a famous Balete tree, which is over one hundred years old. Under the tree, there is a pond with those fish that eat your dead skin. If you have the threshold to do it, I’d recommend it because the view is stunning. After snorkeling, we went to the Siquijor Market and did a bit of shopping. But the highlight of my whole trip was trying this local delicacy called salwaki. Sea urchins are famous in Siquijor, and for fifty pesos, or a little less than 1000KRW, you can get a bottle filled with it. I bought pandesal, which is pilipino sweet rolls, and parked on the beach and poured the urchins inside. I still think about that urchin often, such a world away from the expensive sushi plates you see in big cities, but twice as delicious.  What else to do to end the day than catch the sunset again, so we headed to Paliton at low tide, which is especially fun as you can walk on the sea grass. 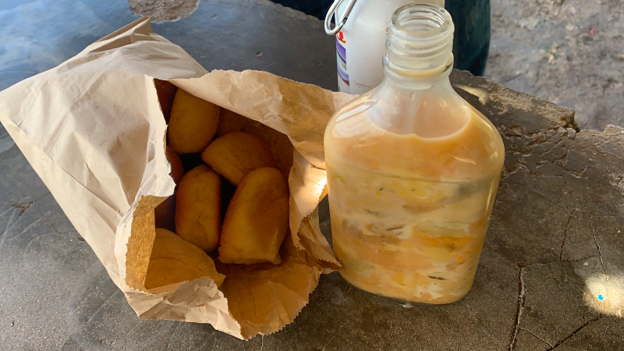 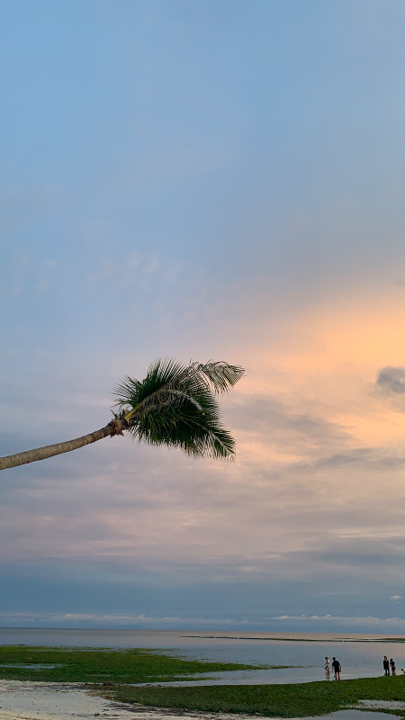 The final day, I had to go straight back to Siquijor Market for more salwaki, then we headed to the mountains. Siquijor is famous for its indigenous healers, which is also a plus because it scared away colonizers. My healer did a couple of ceremonies for me that I like to keep private. If you are curious, make sure to come with respect and an offering, as this is a very sacred experience that isn’t catered to tourists looking just for a fun activity. This, in addition to the sea urchin, were what I remember most about the island. Afterwards, I stopped at this tattoo studio by Kuya Choy, who runs the studio in his house. He gave me four medium sized tattoos for about 35,000KRW each, with such fine line work that I would recommend to anyone in town. He goes by Choy Minuza Siqujor on Facebook so you can send him a message, or you can ask anyone on the island when you’re there. They’ll know where to take you. 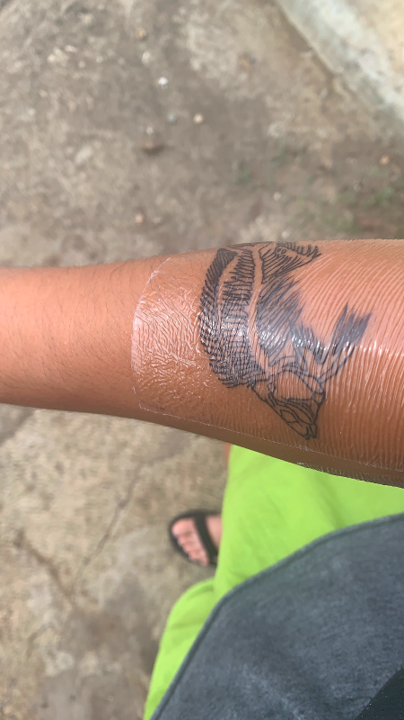 The next morning, I had salwaki for the last time, and headed back to the port on a big ship to Dumaguete. I was sad to go, but I am always sad when I leave a place I love in the Philippines. I spent the day walking the promenade that wraps around the ocean, and then took a tricycle to the airport, to go back to Manila. Many people rave about the Philippines because of its stunning islands and cheap prices, but it is much more than that, especially considering “cheap” is only relative to western powers. These are people who need to survive, and are able to offer you so much of their love and joy, so if you ever head towards Siquijor, come ready to reciprocate, and to eat lots and lots of sea urchin and coconut meat.