Take Advantage of Korean "Service" and Eat and Drink for Cheap

One of the biggest allures of the teaching in Korea is the opportunity to save money, whether it be for your own personal savings account or for paying off student loans. I am extremely fortunate to emerge from the extravagant nature of the American university experience with minimal student debt, but that does not mean by any stretch of the imagination that I am careless with my money. In South Korea, not only is the general cost of living pretty low compared to living in the United States, but establishments are also quite liberal with dishing out freebies at every turn. Allow me to fill you in some of my own experiences with the magical Korean concept of “service,” and by doing this I hope to teach you about the ways you can eat and drink in Korea for cheap.
Korean Service
The exceptional service at restaurants and other service establishments is certainly a selling point of this country, especially since you combine it with the fact that they don’t receive tips of any kind. I will say the button (pictured below) present at most tables infinitely speeds up service, and that is something I will miss greatly upon my return to the United States.

As if the service was not enough, many places will provide you with free food or drink of some sort. One example of this is at bars, where not only will you receive typical bar fare like nuts and crackers, but some drinking joints will go a bit farther. My favorite Daejeon dive bar Jiny’s provides you with nachos and cheese, as well as a weird Korean version of pasta salad. Is it the definition of gourmet cuisine? Absolutely not but it certainly is something delicious to line your belly to help soften the effects of that alcohol.

Also Tudari, a watering hole I frequent quite often (probably too often), without fail will provide us with a delicious egg dish (pictured below) served in a scalding hot pot. 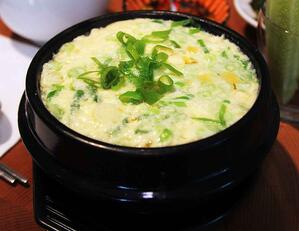 If you are looking for a classier dose of “service” head to one of the pricier self serve beer places. By self-service I mean they have fridges filled with imported and domestic beers, which you can retrieve at your own leisure, and just have it added to your tab. The one near our apartment will spoil you with fruit plates, which is pretty awesome considering the sometimes exorbitant price of fruit in this country. Honestly if I think about it, the owners are still making quite the tasty profit considering how much we are paying for beers, but eh I’m an English teacher not a finance major so I will choose to ignore that fact.

The Perks of Being a Frequent Customer
Restaurants will also often provide little extra items for you. Whether you receive these can depend on a variety of factors. If you spend a particularly large amount of money, the owners will show their gratitude with an extra dish or maybe a round of drinks. Also, if you frequent a restaurant enough and they know you and realize you are a devoted patron, this could also lead to a little charity. I will admit however that sometimes it comes down to just the luck of the draw. I was at a Korean restaurant the other day and received a large cold noodle dish free of charge. Whether I was chosen as their one-millionth customer or maybe I was the first foreigner of the day I will never know, but anyone who has met me knows I will never turn down free food.
Finally, on a little side note, the screen golf place we visit weekly will sometimes provide me with a complimentary bottle of meokeolli, since they know I have a propensity for it. Again, anytime you visit a place enough times, you are much more likely to receive some freebies along the way. So get out there and mooch that free stuff people!