Five Things I Wish I knew Prior to Teaching in Korea

Hello everyone, my name is Monica and I recently began teaching in Korea for ChungDahm Learning beginning this May.  To give you a little background about myself,  I have lived all over the United States and I received a Bachelor of Science in Environmental Science from Drexel University and a Master of Marine Science from University of North Carolina Wilmington.  Since graduating I had spent several years looking for a relevant job until a friend recommended teaching in Korea. After doing some research I decided to apply through Aclipse.

After going through the application process, which Aclipse was very helpful guiding me through, I was finally placed with a teaching position at ChungDahm's Mokodong branch which is located in Seoul.  Despite doing a lot of research and reading the other Aclipse blogs written by current teachers abroad, there were still some things that I learned upon my arrival that I wish I knew prior to departing for Korea.  In this blog I write about five things that you will most likely not find in your research about living in Korea.

1. Paying for an Apartment

Picking my apartment was incredibly fast and easy once I had my appointment.  Teachers can either find an apartment through a realtor, which usually has a fee of around $200 USD, or go with a ChungDahm representative like I did.  My ChungDahm representative showed me two available places but when I arrived on move-in day with all of my luggage I was surprised to find out I have to pay in cash.  I visited every convenience store in the area but was only able to withdraw about one third of the cost of rent.  PRO TIP: visit a Citibank, Hana, or IBK (Industrial Bank of Korea) to withdraw cash prior to moving into your apartment.  Wooribank does not accept foreign cards.

Another thing that I was surprised by upon moving into my apartment was the shower situation. Although I watched the apartment tour videos on the Aclipse YouTube page some of the places didn't seem to have showers, which was a cause for concern. It turns out that some bathrooms have neither a  shower or bath but instead a hose with a drain on the floor.  When picking my apartment I had two options and I chose the apartment that had a shower, only to find out later that the walls don’t seal with the floor so the water leaks out anyway.  It’s basically a glass partition on one side of the room.  I’m hoping that buying a squeegee will help clean up the spill.

Another issue I had with the shower was that when I first used it, it didn't have any hot water.   I asked around however and found out that I have to turn on the Ondol heat system on my apartment wall (pictured below) in order to get hot water.  If you can’t read Celsius, you can just search for online conversions. 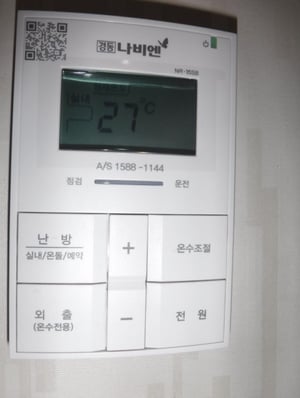 The first time I experimented with this I made the water so hot that I burned my feet on the hot floor.  After some adjustment I figured out how to turn just the hot water up and the floor down.  My landlord said I must turn it off when not using so I must plan my showers ahead by 30-40 minutes.

One of my master plans when packing was not to bring any bedding, in order to save space in my luggage, and just buy it upon my arrival.  Another reason I didn't bring the sheets was that I didn’t know what size bed I was going to have in my apartment. Sounds reasonable right?  Except I quickly found out they it's hard to find bed sheets here.  After doing some research however  I found one fitted sheet only for $38 at emart.  If bed sheets are important to you, I recommend either bringing them with you or try to find someone in the military who can acquire them on their base.

Before coming to Korea I had heard about other teachers talking about the trash and recycling situation in Korea but until I arrived I didn't realize how different it was from back in the United States.  I was thinking that Korea was progressive to have separate trash and recycling, but the first time I walked to the dumpster I was overwhelmed. 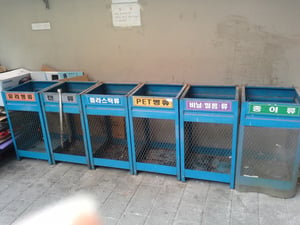 Guess which one bin pictured above is the trash?  The answer is none of them; there are six kinds of recycling, including three kinds of plastic!  Koreans just throw the trash on the street, but it can’t be in any bag.  Your neighborhood has specific trash bags you must pay for (like $1 for a stack) but I still feel wasteful double bagging all the convenience store bags I was collecting for trash bags.

Speaking of convenience stores, they are everywhere.  Seriously every block and Seoul blocks are tiny.  I frequent all of them and Korean snacks have such variety.  They have lots of fun flavors and I’m having a wonderful time trying them all.  Food in general is tasty, flavorful, spicy, and inexpensive for the most part.

A store to look out for is called Daiso.  Locations are plentiful and you can find various household items here for very cheap, think $1-$5 store.

5. Filling Out Information For Your Alien Registration Card

When I was filling out the information for my Alien Registration Card at the immigration office I requested it be sent to my apartment only to find out that it got bounced back.  I’m guessing I wrote my address wrong because I had no practice writing it previously and I hadn’t actually moved in yet.  To be safe when filling out this information I recommend having your card be mailed either to your school, or going back to the immigration office and picking it up yourself.  The one drawback of going back to pick it up in person is that you may have to wait in a long line.  I was very close to having to pay for another medical exam because I was a day away from expiration.

I hope these tips have been useful and will help make your first days in Korea a little easier.