Weddings In Korea: Tips and Expectations

Hopefully while living in Korea, you will get to experience a Korean wedding. It is extremely different from those that I have gone to in the West. Typically, weddings in America and Canada are all day events. Weddings there consist of the ceremony, dinner service, and then drinks and a party to round out the night. When I went to my first Korean wedding, it was a shocker. I think in total, the wedding ceremony was 25 minutes. Here are a few reasons why it is like that and here are some expectations when you do go to a Korean wedding.

At this point in my life, I have been to what seems like a million weddings. A good number of friends from high school and college have gotten married in the past decade, so I feel like I have a solid understanding of how the typical wedding in the West works. Recently, I had the privilege of attending the wedding of a Korean friend and it was really interesting to compare weddings in Korea to what I'd seen back home...

While living and teaching in Korea these last three weeks, I've been invited to two Korean weddings. I was first invited as a plus one by a fellow English teacher, and my second invitation came from my Korean friend, but with the request to bring 1-2 other English speakers. This was so I wouldn't be completely without someone to talk to; the other wedding guests did not speak much English. My friend and I were met with open arms regardless of the language barrier however, because for Korean weddings, it's a sort of tradition that the more people who attend your wedding, the better luck you will have in your future.

Tags: celebrations in korea, love, what to do in korea, Activities to do in Korea, Spring, couples, Weddings in Korea

An English Teacher in Korea Attends a Korean Wedding 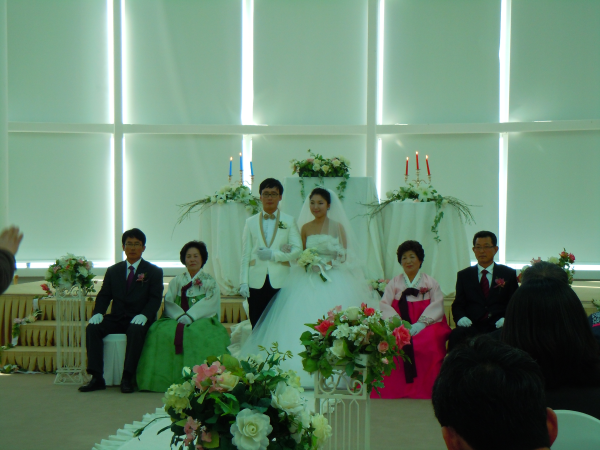 Today, I went to my first Korean wedding. My girlfriend and I took a bus to the south side of Jeju Island and arrived at the convention center by noon. I am friends with the bride; I had tutored her and her sister in English over the summer. The wedding was held on the fifth floor in a beautiful round room looking out over the ocean. We were right on time but there were not enough seats to accommodate everyone so we stood on the sidelines with a pack of other guests. Surprisingly, many of the guests were dressed casually, I saw a few in Ugg boots and jeans. I was glad they were not too dressy and I felt I fit in with my limited wardrobe, despite being the only white people in the crowd. I wandered over to the coffee and tea table to serve myself and didn’t even realize the bride had started to walk down the aisle. The guests clapped for her as she walked down the aisle but they did not stand and the other guests continued to mill around and chat amongst themselves. There was not much fanfare for the bride’s entrance like you would expect at a Western wedding.

Similar to a Western wedding, the bride wore a big, white ball gown in the modern style of Western brides today. However, that is where the similarities stop.  Both sets of parents, dressed in traditional Korean garb, sat on either side of the altar facing the guests. The service was held by the groom’s boss. He spoke loudly and in a monotone voice into the microphone. Apparently, it is a Korean tradition to have a person of authority in your life who you respect to perform your wedding ceremony.