One of the best parts of living in South Korea is it’s a hop, jump, and a skip away from a myriad of destinations within Asia. With the popularity of budget airlines like AirAsia, it’s easier than ever to go on that trip into the Mongolian desert or the temples of Cambodia. One of the most impressive places to go is the Philippines, which is where my family and roots are. There’s many a blog by teachers about their trips to the archipelago, detailing the bliss you find from escaping the bitter Korean winter to an island paradise like Boracay or Palawan. Going to any of those locations for holiday is a guaranteed good time.

Because of the nature of there being more than seven thousand islands in the country, direct flights to those beaches are rare, many requiring the capital city of Manila as the jump off point. As someone who can speak the language, blend in, and has family in the city, I can say that Manila can be a headache even for me. In fact, most outsiders hate it. The critiques are usually a mix of these things: the traffic is terrible, there’s nothing but malls, the food is not worth writing home about. Although there is some truth to these, it’s impossible that this is where one should end in forming an opinion of a place. In fact, I thrive in places other travelers hate, because it makes me wonder what lenses one uses to have those criticisms. Oftentimes, we compare places in the global south to our own cities, expecting the pace or technology to be the same. This is exactly why Manila is a perfect place to shift our perspectives and find inspiration and energy in it. I don’t want to rattle off the top tourist destinations within the city, because you can find that easily online, rather focusing on the little things that make Manila special to me. (Spoiler alert, they are mostly food.) 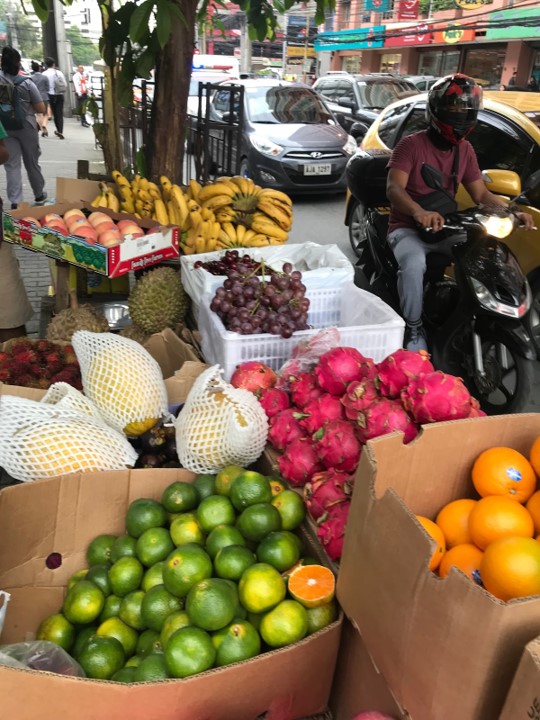 One of my favorite parts about the Philippines is breakfast. Manila in particular is a city that is always awake, and if you prioritize enough, you can hear people in the street yelling “taho” in the early hours of the day. Taho is somewhere between a dish and a beverage, made of warm silken tofu, tapioca pearls, and brown sugar simple syrup, mixed into a cup that you slurp. It’s sweet and filling and not lacking in protein to start your day off right. It reflects the distinctly Chinese origins of a lot of pinoy cuisine. The best part of this food is the experience it takes acquiring it. I used to live in a neighborhood called Mandaluyong, where my local taho person would start walking around as early as 5 am. They walk and yell carrying two metal barrels levied by a bamboo stick that they balance on their shoulders, which is a beautiful sight to see. Bonus points if you bring your own cup! 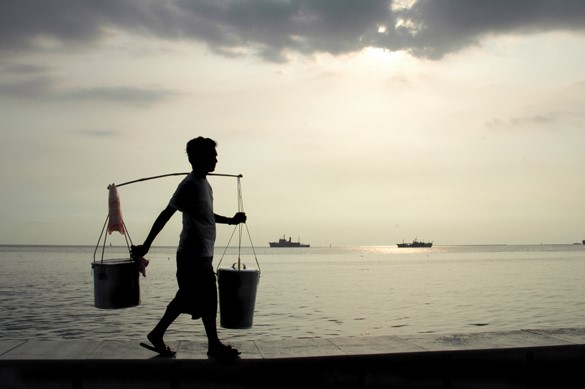 My other favorite pinoy breakfast is silog, which is a portmanteau of sinangag and itlog, meaning fried rice and egg. There is always a third component which you would stack at the front of the name, depending on what you order. There’s tapsilog, which is marinated beef tapa, spamsilog, with spam, a living example of the remnants of American colonization, and bangsilog, made with bangus, otherwise known as milkfish in English, a staple in the pilipino diet. My absolute favorite is tocilog, which is tocino, pork cured in pineapple juice (which has origins in my mom’s province so you should definitely try it!).  The great part of having it in Manila is that although it’s a breakfast dish, silog shops are more often than not open 24 hours, and they are incredibly cheap and hearty. I usually only pay 50 pesos for the entire meal, which rounds out to a dollar. Make sure to eat it with vinegar and chili, or with ketchup made from banana, which is sweeter and oftentimes spicier than tomato ketchup. Pop a squat in the plastic chairs and tables and watch the traffic go by, and it is the recipe for one of the most special eating experiences in the Philippines. 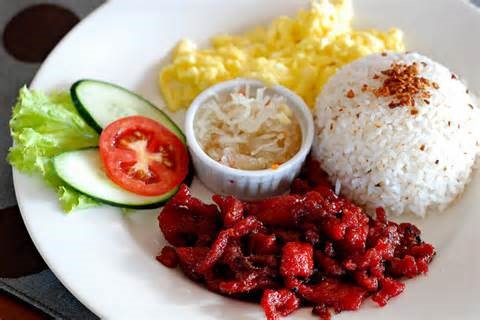 People who criticize Manila for having nothing to do except go to the mall usually don’t take into account how different of a social space it is in the country. Yes, people do go shopping, but more than anything they serve as communal space with easy access to air conditioning and bathrooms, both important respites in the bustling city. They are the best place to people watch, and if you need a break from your wandering, go into the big department stores and see for yourself just how much pilipino people like singing. Stores like SM and Robinsons usually have multiple TVs that are set up with karaoke, so you can pop in, sit on a couch, and watch people, a lot of the time alone, sing Total Eclipse of the Heart or another cheesy, perfect power ballad. The employees often take time to belt out a note as well! In fact, you can walk on any street and find people doing karaoke. It’s not private rooms like in South Korea, and people will belt into song on the streets themselves. Going to any dingy bar is my recommendation so you can see how locals do it best. 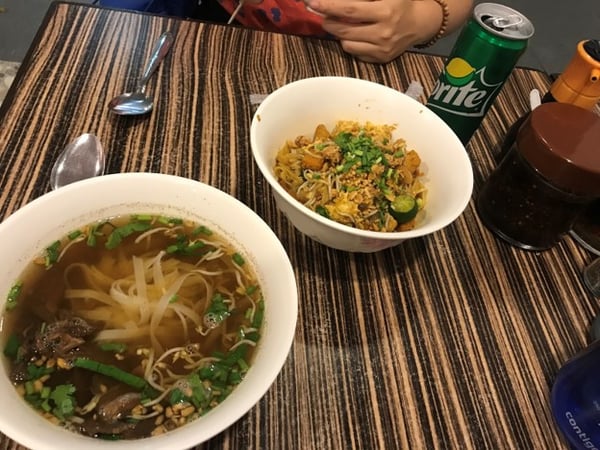 But if there were a mall for me to recommend, it’d be Makati Cinema Square. Located in the south of Manila, it looks a bit run down at first sight, but is ripe for exploration. There’s plenty of amazing and affordable eating options, including Sen Lek Thai Noodle, a small place where you can get beef broth noodles or pad thai for less than 100 pesos. I went there with my best friend and was pleasantly surprised at the quality of dishes, and the decorations of Thai posters and ornaments reminded me of being in a hole in the wall in Bangkok. There is also a crystal store called the Fifth Dimension, with a dizzying array of stones, incense, and other things fit into a tiny shop. There is also a section of instrument shops with people riffing on guitar and piano, multiple salons, tech repair stores, and even a bowling alley upstairs! One of my favorite things about this place is the multiple ukay-ukay, or second-hand stores. A lot of times they can be rather dirty and disorganized, but the ones here are clean and sectioned by style of apparel, so I walked out with five new shirts and blouses for less than nine dollars! There are also galleries popping up with beautiful local art, and if you want a massage or to get your nails done, there’s places for that as well. So come with an empty stomach and some cash, and don’t be shocked to find yourself there for hours. 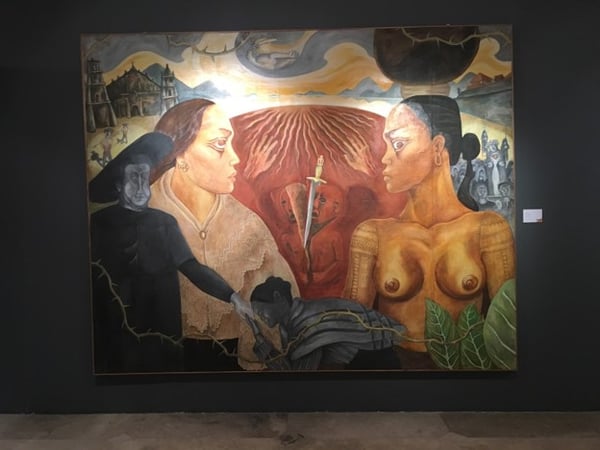 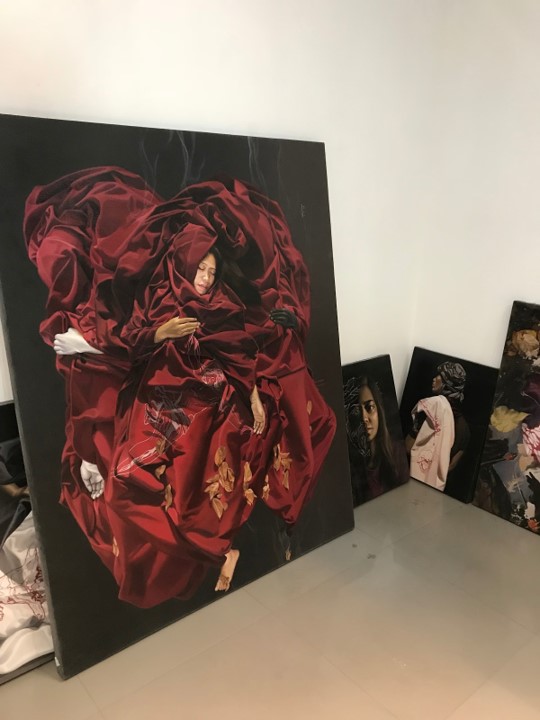 A list of tourist destinations that I do recommend are these: Binondo, which is the oldest Chinatown in the world, established in the 1500s; the Metropolitan Museum of Manila, free on Tuesdays; Divisoria, the largest market where you can find anything and everything, spilling over with motorcycles, chickens, and labyrinths of fabric; Intramuros, home to stunning cathedrals and churches; Poblacion, a neighborhood in Makati with plenty of nice bars like Alamat which serves local craft beer, Pura Vida, and Tambai, which is a bar/restaurant where you can get nice skewers. (Try the chicken gizzard, you won’t be disappointed). If you want a fine dining experience, I highly recommend Toyo Eatery in Makati, where they serve an eleven course meal, fusing traditional foods with seasonal and stylish twists. The open kitchen is beautiful to watch, and everyone who works there is full of energy and warmth, on top of it being probably the best meal I’ve ever had. 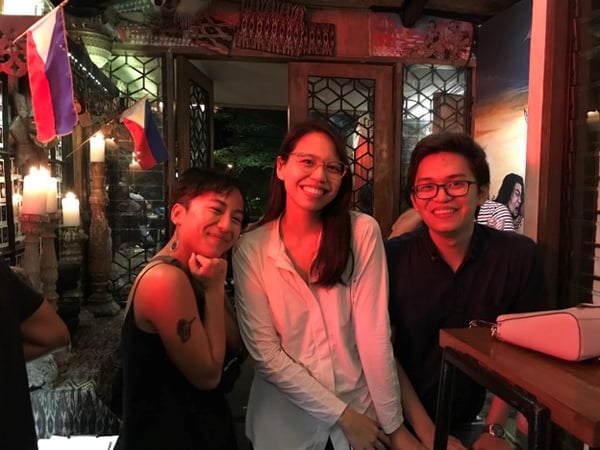 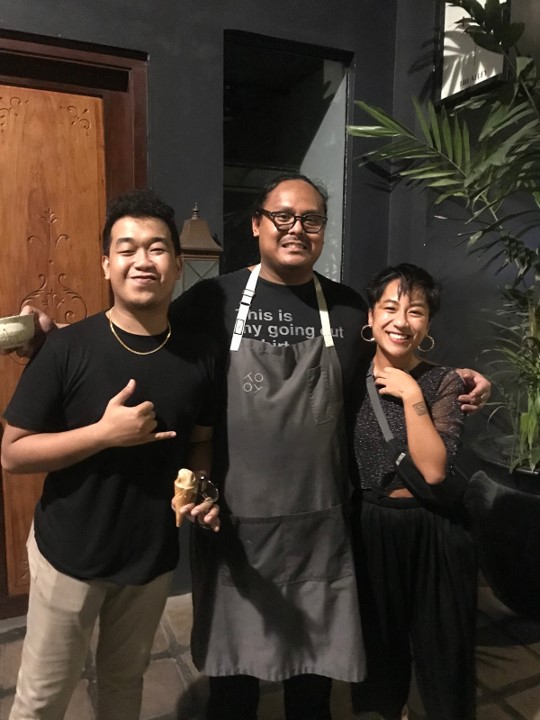 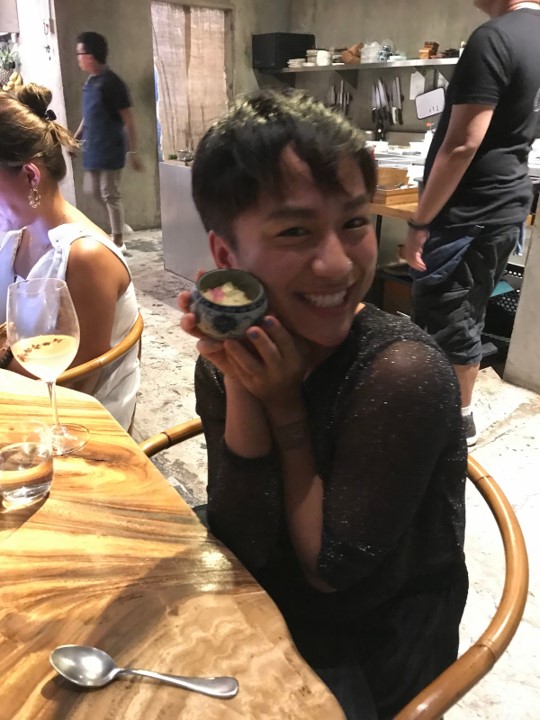 As someone who grew up in Los Angeles, I will still argue this to death: Manila has some of the best sunsets in the world. If there’s one thing you take from this, it is to make your way to Manila bay, stroll the promenade, and watch the sun go down here. As the cars and jeepneys honk behind you, you can watch the ships on the horizon and observe the kids playing, couples relaxing, and everything else around you in this metropolis become the paradise that the Philippines is known for.