A Day in Paju

As winter rears its sometimes unforgiving head in Seoul, I reflect on the times in the country where I actually leave my officetel. One of the most tender and important was a weekend I spent just a bus ride away outside the city, spent in Paju and Imjingak. I stumbled into many gems in terms of sightseeing, but that’s only the first draw to return. It was the love and energy people gifted me with while I was there that make me plan my next trip now.

Paju is just a bus ride away from the western side of Seoul. On Saturday morning of Halloween, I decided against spending a night out, so instead I took the green line 2 to Hapjeong station, went to exit 1, and took a red bus called Bus 2200. Naver maps said it would take an hour to get to Eunseok-gyo-sagori station, but I took a direct bus and I got there in thirty-five minutes. The scenery was immediately different from Seoul. The buildings were all modern, but they were much fewer, sprawled across a lot of greenery and fresh air. Upon the recommendation of my friend, my first stop was the Forest of Wisdom, a giant library with rows and rows of books divided into three sectors. I saw people of all ages reading a myriad of books, and I spent hours strolling through the aisles observing the different typography and calligraphy of the sleeves. Even better was the design of the building itself. It’s sleek and clean, with a lot of open space to let in light, so I set up a solo picnic on the top level and enjoyed the view of kids playing in the children’s area with their families. 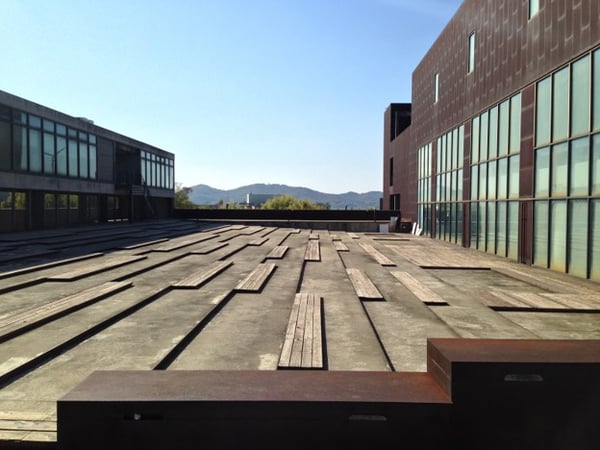 In the early afternoon, I trekked along the main road and went to MIMESIS Art Museum. MIMESIS is actually a publication company that prints beautifully designed graphic books and they run this separate gallery space. The exhibition inside had incredible paintings of the Korean mountain landscapes in various shades of red. Seeing these sweeping visuals in the middle of a quiet town was a very special moment. But what was even better was that there was a craft fair going on outside, with multiple food trucks and artisans selling their jewelry and other handmade designs. I set up a spot in the grass along the winding curves of the building and watched everyone dance around, eat, and play. (Setting up camp in the sun and people watching is paramount to my well-being, and South Korea is a place where I’m lucky to do it often.)

Afterwards, I passed by a small bakery where I bought red bean bread, which is a must for me, and also had some bingsu (shaved ice) in a small ceramic pot. The next place I went was the Paju Premium Outlet. I didn’t have much intention of shopping, but it was nice to see all the Christmas trees that had already been up and bursting with red and gold ornaments. This is where the day gets very tender for me. I had a light dinner of stone pot bibimbap, and prepared to find a bus to the Airbnb that my best friend had organized for me. I messaged the hosts asking for tips on how to get there, and they immediately responded back saying that they would pick me up in their car. I know it sounds absurd to accept a ride from someone you’ve never met, but somehow my intuition told me it’d be okay.

Within the hour, the husband and wife hosting me picked me up at the outlet and drove me to their house. We arrived late in the evening, so it was dark, but what I did see was beautiful. They lived in this spacious house in a quiet neighborhood, with open staircases and a large veranda. Everything was made of dark wood and intricate ceramic work, and I felt like I was in the most peaceful place on earth. When they showed me my room which was supposed to be a shared hostel type space, there was a white board saying, “hello, welcome Nico!” They made the room private for me. They had guests in the other rooms, and they invited all of us to dinner. I rested for a bit, then made my way out for what I thought would be a quick late night snack. 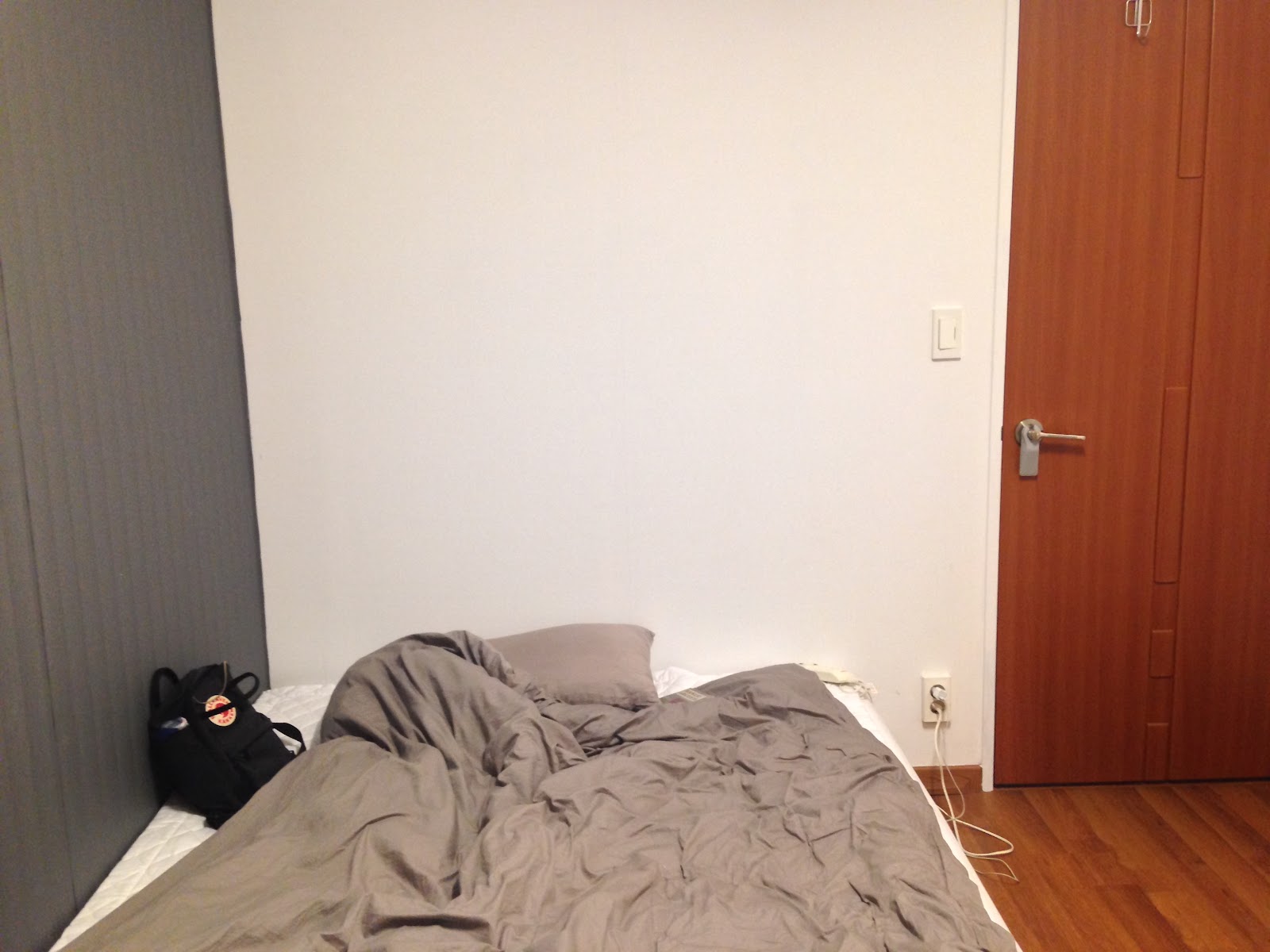 This dinner quickly became one of the most memorable meals of my life. There were two other groups of guests. One was a husband and wife visiting their son, who was serving his military service at the base nearby. They came to visit for the weekend from Seoul. The other was a group of artists and thinkers, including a Korean woman who studied Japanese literature in Tokyo, a Korean-American from California who was now a design and architecture professor in Daegu. They were all friends from college who decided to reunite in this town for the weekend. Then there was the couple who hosted us themselves. The husband worked at a big tech company, but was tired of the fast pace that the city had, so he and his partner moved out into these outskirts right by the border. Hyungjoo, his wife, decided to dedicate her time to opening up this space to people from all over the world. Her sister, who was eight months pregnant, was visiting from Japan. They ordered a bunch of different flavors of chicken, including my favorite, honey garlic, and cracked open some beers and wine. Once we were a few glasses in, I found out that it was their fifth wedding anniversary! And they were spending it with all these strangers. 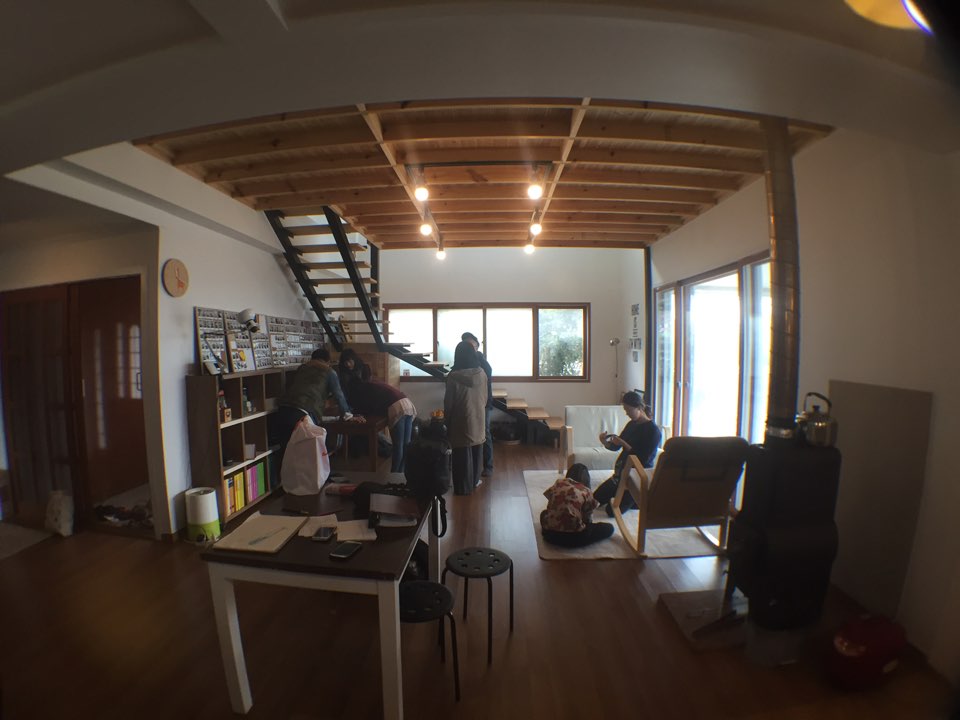 We played music and games into the night, and they shared stories of their hobbies. Hyungjoo told me her passion is wellness, like organic produce and going to the spa, which I am very into. She told me about these hot springs in Japan where monkeys sometimes visit, which was wild because I ended up teaching a lesson on that very same place a few weeks later! It’s a shame because I can’t remember any of these people’s names now, as it happened three years ago, but I think of them so fondly. The professor from Daegu taught me a bunch of Korean, and they all gave me my first immersive hangul lesson. By the end of the night, I was able to write the alphabet, albeit nervously. I know it’s a cliche to talk about traveling and how communication is much more than spoken, but it really is. I was the only person besides the professor who spoke English, and I felt so listened to and cared for by everyone. I went to bed so grateful for the decision to spend the weekend here. 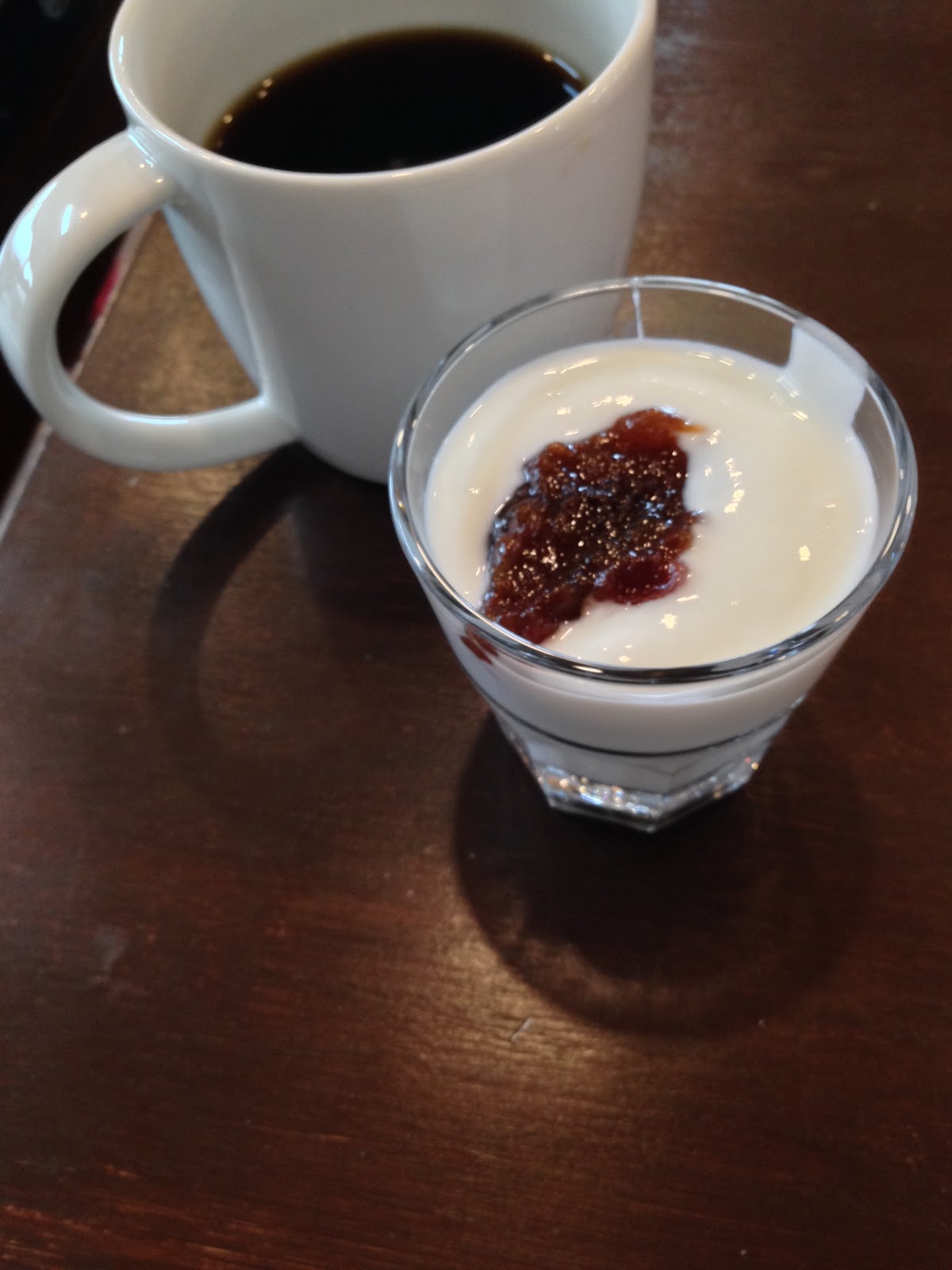 The next morning, I woke up to a giant breakfast of savory pancakes, banchan, pour over coffee, and homemade jam and yogurt. Hyungjoo then showed me two of her traditions that she did for her guests, and the first was this ever growing collection of restaurant recommendations, compiled by her guests. It was incredible to scroll through and see what to order in so many nooks of the world. I was honored to add to that book with my recommendation of calamari grilled pizza from this place in Providence, where I went to college. Then, she took a polaroid of me at the foot of her stairs and told me to write any quote that came to mind. She said that a year from that date, she would send it to my home to remind me of the time I spent there.  After checking out, I had planned to wander around Paju art village, but the artists invited me into their car (again, strangers, but not so much anymore at that point), and showed me the border at Imjingak. We ran around in the grass, took selfies, and ate warm snacks. 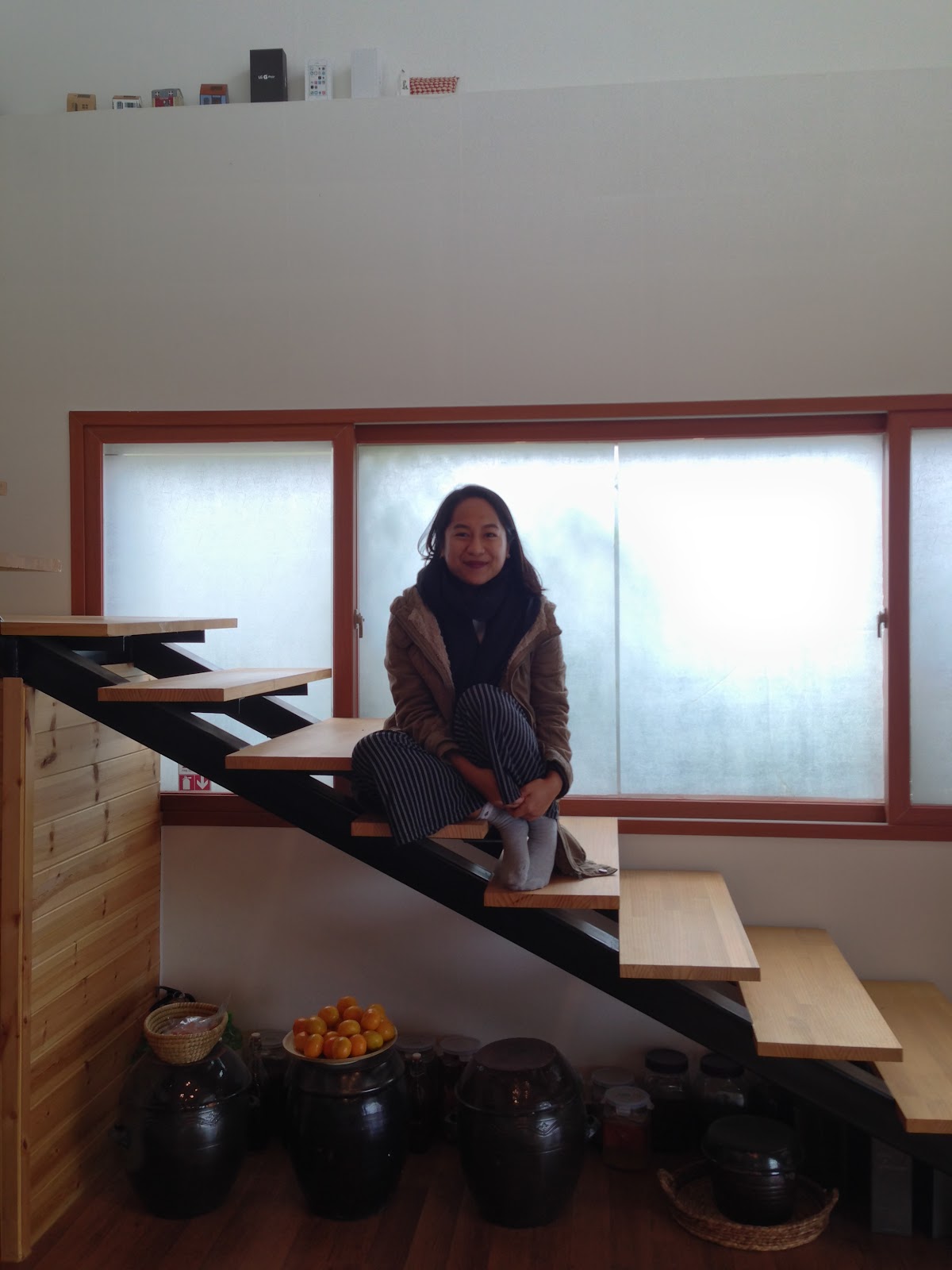 I went back to Seoul feeling so wholesome, loved, and thought of. A year after that, I was traveling through the Philippines, but when I got home to California a few months later, I found that polaroid on my desk. As I settle back into my second term now, I find myself looking at Hyungjoo’s airbnb listing. Although I’m sure the galleries and museums have new amazing art and installations, and there are new cozy restaurants, I am keen to return to Paju because of the fondness I have for the people who opened up their home to me. If only I brought the polaroid with me, but I know if I do go, I’ll have a new one waiting for me a year from now. 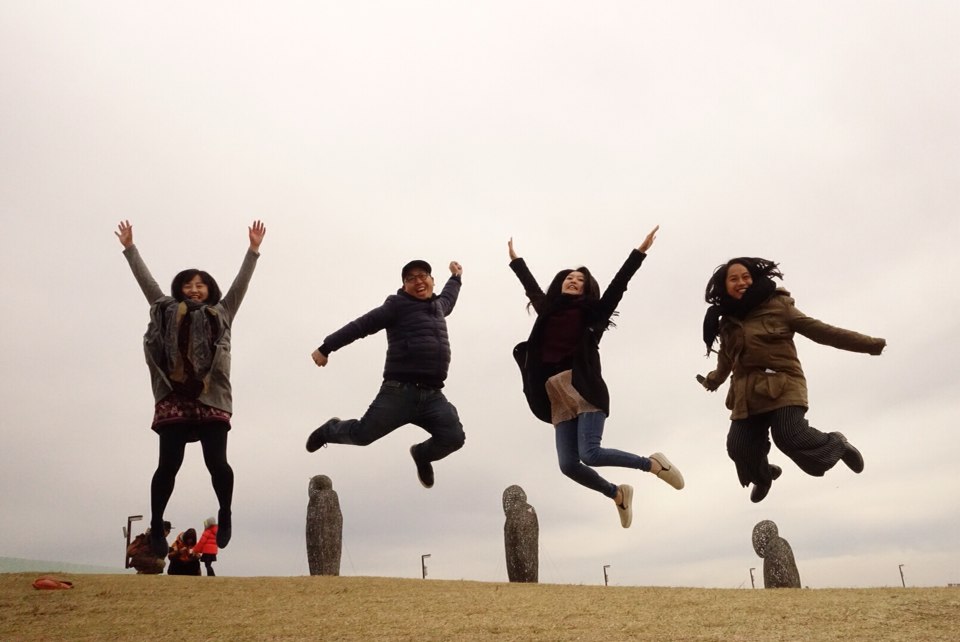 Tags: things to do on the weekend, Weekend activities in Korea, teach and travel,, traveling