Bowling is one of those things, like push-ups, limiting your screen time, or language learning, only gets better with one thing-consistency- which I unfortunately lack in such a niche, arthritis inducing sport. In our teacher’s meeting early on in the term, I kept my hand down when our Team Manager asked if anyone was interested in participating in a company-wide tournament. It was nice to see the Kakao chat blow up with plans to practice after work and on weekends knowing I’d sit it out in the comfort of my officetel. However, by the final head count before submitting our teams, it was a party of different coworkers bragging about how bad they are. So I thought, this must be my people, this must be my time. This type of company bonding event doesn’t happen that frequently, and I had been emerging from my self-induced winter cave, and from some convincing by my friend, I decided to join in. 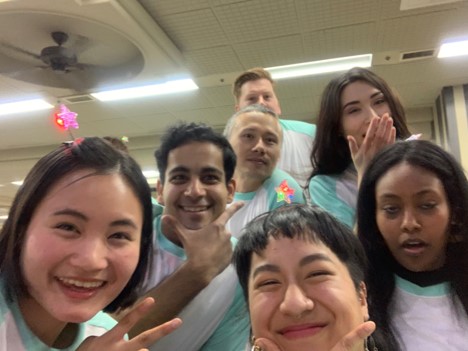 If there’s one thing I can do to make up for lack of skill, that’s deflection and smoke and mirrors. While my colleagues headed to the bowling alley to practice further, my contribution was in the ridiculous aesthetic department. Our Faculty Manager ordered us matching T-shirts, while I suggested those hair clips you put on the top of your head that have a mini windmill or glowing heart. We decided on glowing rainbow stars and called it a day. Our manager ordered a bunch of them online and they arrived the day before the tournament. With this uniform, I knew we couldn’t lose...style points. 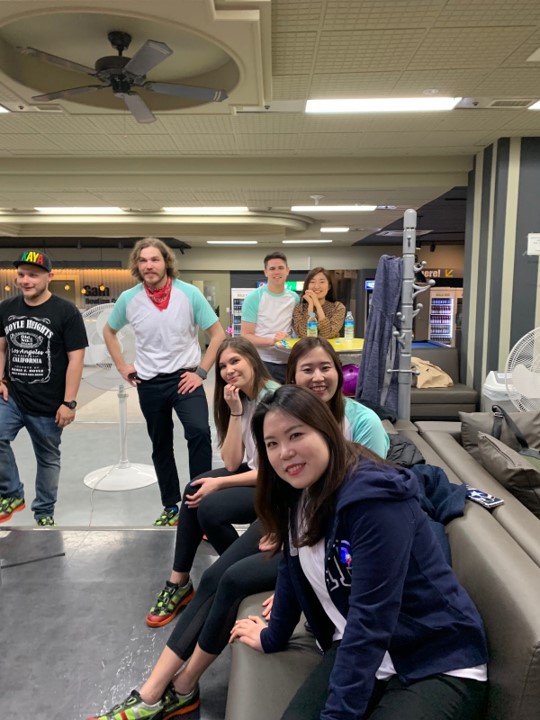 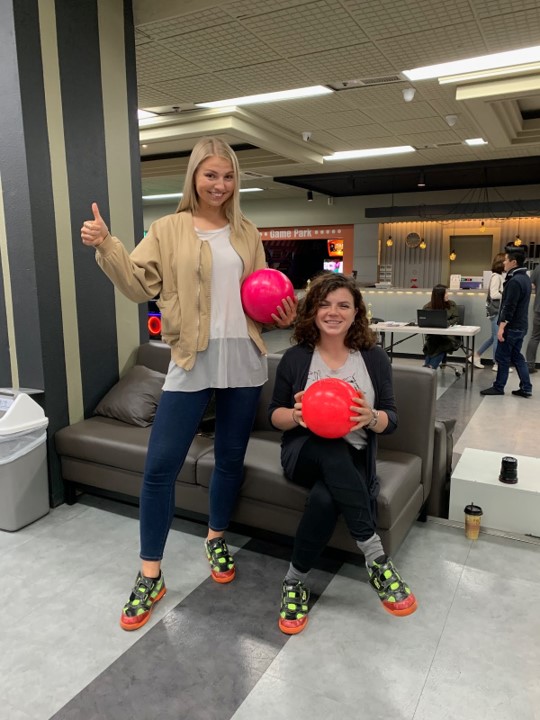 The match was held at Binz Bowling Alley near Coex in Gangnam. We all arrived, and for some reason I became super nervous, like I was seventeen and trying to not forget how to use a calculator in the middle of the SAT. It was very surreal greeting people from Headquarters who I only ever communicated with via email as I was embarking on the employment process. Putting faces to names was a big plus in my book. As different schools started to arrive, I was surprised to see how big our party was. I don’t know what I was expecting, as ChungDahm has over two hundred schools across the country, and also internationally, but I was taken aback nonetheless. We ended up taking the majority of both floors of the alley. It was incredible seeing the other teams in terms of their names and outfits. Some even made customized sweatshirts! (But our glowing star was not to be topped.) 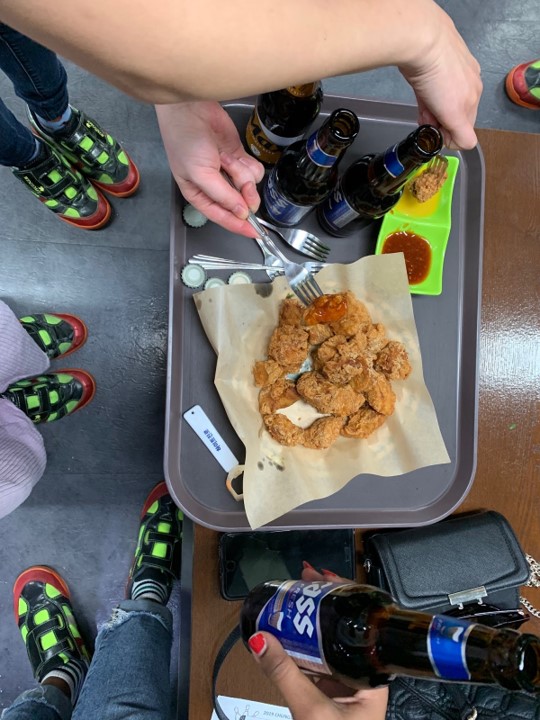 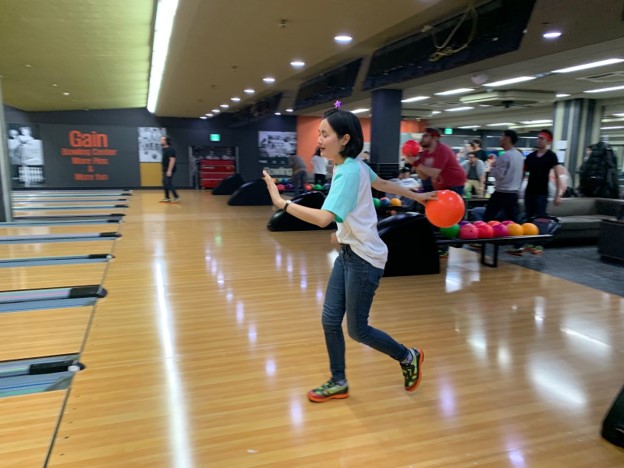 As someone who does not have much interest in sports these days, I’ll spare you my sparknotes attempts at commentary...and this omission has nothing to do with the fact that our team, Unbowl-ievable, which I was the captain of, was hilarious. I’ll get to our score later. Who cares about numbers anyways?? My favorite part of the tournament was just hanging around with the other players and teams. Even though I didn’t know many people from other branches aside from those I trained with, it was fun booing and cheering them on in intervals. We all ordered a bunch of drinks and snacks too, which may have been the real highlight on my end.

As for the actual game playing, I was impressed at my own capability of starting the round with a strike then nonstop gutterballs. Many of us broke nails, some sprained fingers whilst practicing, and others almost threw the ball backwards. But if losing builds character, than our team has plenty to spare. Our cumulative score was...350. The most incredible part of adding this up was that there was a team who shall not be named who got fifty points below us. It was so fun seeing all the teams get their awards, which made me realize how many different types of people work at ChungDahm. People of different backgrounds, ages, and interests, which makes me remember how many kinds of people you’ll be able to meet if you’re willing or interested. The community is much bigger than you can imagine, and it’s beautiful to see how others have really carved out a long life here. 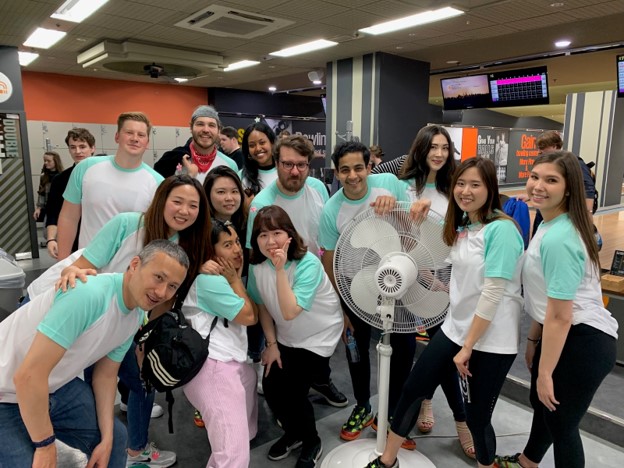 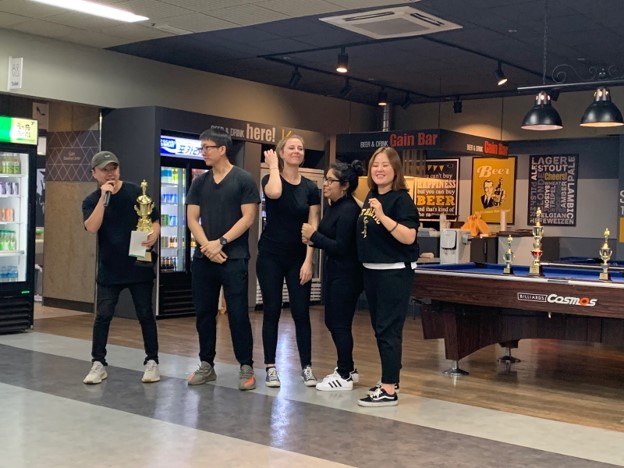 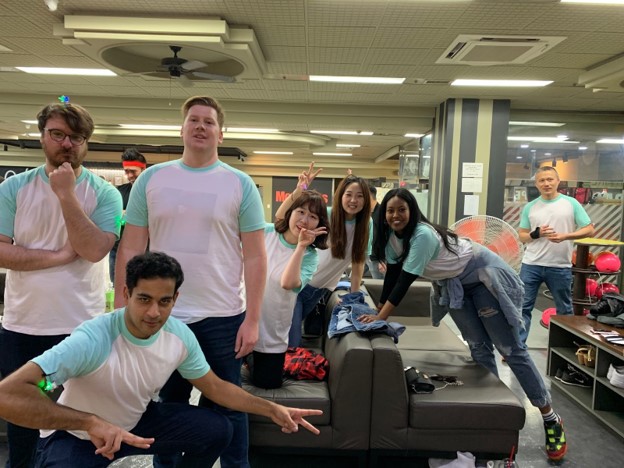 Afterwards, we had a mass exodus to dinner, as the bowling alley tater tots were not enough to hold us over for the rest of the evening after such a strenuous olympic workout. A few of us got to ride with our Faculty Manager, which was ideal because it started raining. We played a bunch of music and had a proper party in the car while waiting for the others to arrive from the train station.We ended up eating at this restaurant with the most absurd samgyeopsal (grilled pork belly) I’ve ever seen. It was thicker and more cushioned than my mattress, and I was not complaining about that at all. I went home at 1 am with a belly full of barbecue, hands full of spasms, new kakao contacts, a still glowing LED star on my head, and contentment at life here. The foreigner community can be insular, but nights like this made me see just how incredible it can be. 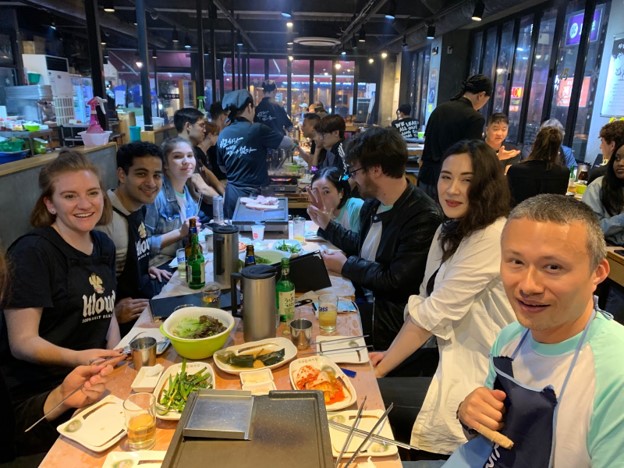 Tags: bowling, chungdahm learning, teaching at CDL, things to do in seoul