Visit Jeju Island During the Summer and Spring Months in Korea

This past weekend I made a sweet escape for some fresh air and relaxation in Jeju-do, or Jeju Island. Jeju Island is just off the coast of South Korea, an hour flight from Gimpo airport, and is a great place to visit during the spring and summer months while you are teaching in Korea. It is known as the "Hawaii of Korea," as it shares a similar climate of frequent rain, as well as volcanic rock. It is an extremely popular vacation spot and makes for a quick weekend getaway. Jeju Island is also a top honeymoon destination for Korean newlyweds. Jeju Island contains a number of UNESCO World Natural Heritage sites, such as cave formations and mountains. There are plenty of trails to hike, seafood to eat, and beaches to relax on, making it ideal for a break from the hustle and bustle of Seoul. 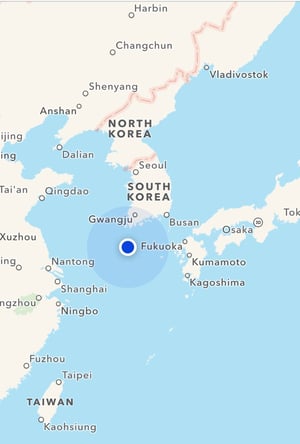 After work on Friday night I headed straight for Gimpo Airport, which is one express subway stop from my apartment... I'm lucky, I know! The flight went smoothly and I arrived in Jeju around 10 o'clock. My family (mother, father, sister and sisters husband) are visiting right now, so we rented a 3 bedroom apartment in Seogwipo, an hour taxi from the airport, on the Southern coast of Jeju. The apartment we stayed in was incredible, with a friendly owner who was more than happy to help us with anything and everything we needed. After some late night ramen I headed to sleep (pension style).

Saturday morning we took a tour throughout the Southern area of Jeju, with an English speaking guide who was quite the character. He has lived in Jeju his entire life, where he learned English and received a tourism degree. The first stop for us was the Hello Kitty museum- known as Hello Kitty Island, which my seven year old self would definitely have enjoyed more than my twenty two year old self, but still it was neat. Hello Kitty Island is mostly an exhibition hall, with different themed rooms and Hello Kitty collections. Our tour guide hustled us through the museum and took plenty of pictures. I mean plenty. There were loads of Chinese and Japanese tourists with their adorably dressed children running wild. Too cute. 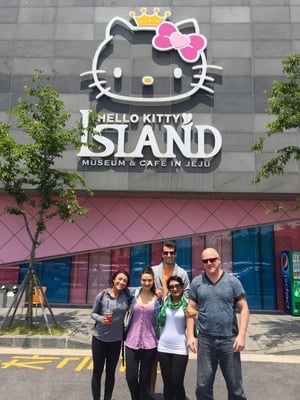 After Hello Kitty Island we headed to a nearby Bonsai Garden center known as "The Spirited Garden." There were a variety of Bonsai trees and plants, as well as stone bridges, garden waterfalls, and fish ponds. Strolling through the garden was extremely relaxing, and the whole experience was enhanced thanks to some ice-cream purchases inside...the weather was pretty hot! The Spirited Garden was filled with Jeju's famous symbol the large rock statues called Dol Hareubang- meaning stone grandfather. There are several theories regarding the origin of Dol hareubang, however they are commonly understood to symbolize protection and fertility. They are fortress guardians, placed in the entrance way of many homes in Jeju, including our own apartment. Our tour guide told us that if a newlywed couple rubs the Dol Hareubangs nose, they will conceive a boy, whereas the ear lends itself to girls.

After a pit stop for some snacks, we pressed on to Cheonjeyeon Falls, one of three famous waterfalls in Jeju. Within Cheonjeyeon there are three sections of waterfalls that are about a ten minute hike down from the parking lot. The water from Cheonjeyeon flows into the sea, which can be seen from a nearby pedestrian bridge called Seonimgyo. We went to see all three, and were most impressed by the second set of falls, as well as the bright blue hue of the pond sections. 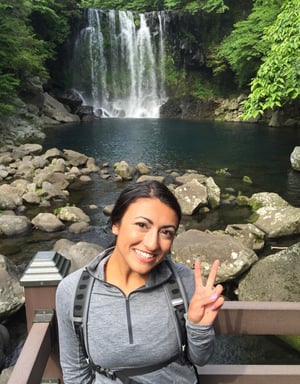 It was reasonably busy, but not overwhelmingly so which was much appreciated. After hiking over Seonimgypo bridge we stopped in a snack area for ice cream number 2. When on vacation right? We probably spent about an hour and half at the falls in total, before heading back to our energetic tour guide. If I go back to Jeju, I would like to spend more time hiking, as there are many more trails I didn't have time to see. 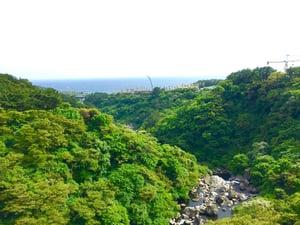 After we departed from the waterfall we got the chance to relax on the beach before dinner. This was one of the highlights of the trip for me. The beach was on the Southern coast of Jeju, and super clean. Walking barefoot on the beach is so tranquil and soothing, and it felt like the perfect end to a busy day of touring. Although May is considered to be too cold for most Koreans to swim, there were small groups and families that were enjoying the water as well. We walked, hung out and collected shells by the ocean. 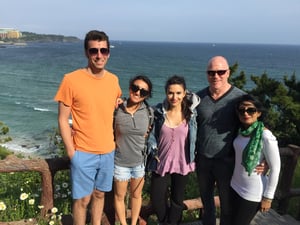 Sunday morning greeted us with fog and a threat of rain. My dad and I set out to hike one of the Olle trails, but about twenty mintues into our hike, we stumbled upon a submarine tour, and decided to go on it, spur of the moment. The Seogwipo Submarine has been around since 1988, and I was relieved to discover it holds the record for longest running submarine tour without a single accident on record. My dad and I joked that perhaps this meant they were overdue. The submarine tour takes tourists to Munseom, which is home to oustanding coral reefs, fish, and a shipwreck. The whole experience took about two hours, during which we got to see a diver feeding fish, as well as the aforementioned sights. I think our expectations for the submarine were a little high, but we both agreed that it was a pleasant experience, and now we can both say we've been in a submarine!

After our submarine tour, we ended up spending time together as a family, and having a seafood noodle dinner as the mist turned rain rolled in. We also had ice cream for the fourth time on our trip. It was really nice to catch up with my family outside of Seoul in such a beautiful place. There is so much to do in Jeju, I know that I barely scratched the surface! The next time I return to Jeju, I would like to see the famous women divers, eat tangerines, and hike Mt. Hallasan. Thankfully, I still have lots of time left here in Korea!