Visit The Daegu Dalgubeol Lantern Festival While Teaching in Korea

We often forget or perhaps neglect all the beautiful sights we’ve seen or experiences had. Sometimes we might subvert the value of our own happy experiences simply because they are our own. I’ve been living and teaching in Korea for six months now. During this time so much has happened, and I mean globally. There has been much unrest in the world: tragedies, doubts, concerns. Still, because of these times, I’ve learned to pay more attention to the moments and days I feel especially happy, cheerful, content. In fact, one of the best events of my life to date happened just last month: the 2017 Daegu Dalgubeol Lantern Festival in Duryu Park to celebrate and commemorate Buddha’s birthday. 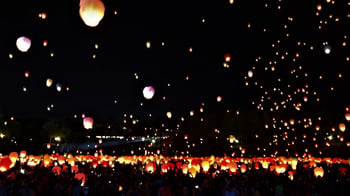 Daegu is about an hour and a half from the Busan, where I live in currently, so my friends and I made it a group event. We took the metro to Sasang station, where we took a bus to Daegu and made sure to arrive at the stadium at least an hour before ticket distribution. For general seating (yellow and blue seats), tickets are free but there’s limited first-come-first –serve supply. So we basked in the sun for an hour and a half, which on a beautiful day, was welcomed. However if you buy general seating, you aren’t part of the lantern release, you’re just an onlooker, which we were all perfectly fine being. They event didn’t start for a few hours, so we walked around Daegu and had lunch before settling into the stadium at 4pm. The actual event didn’t start until 7:00pm, but it was important to enter early to find seats. Performers entertained the bustling audience with traditional music and dance. My friends and I used this time to catch up more and play card games. 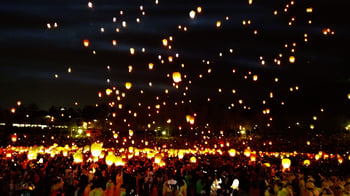 Soon enough, the night rose and the ceremony began. The thousands of people became excited and there was a lot of movement in the pit of the arena, where everyone was preparing their lanterns. A lantern was released. Then a couple more. We laughed as one got stuck in a tree. Quickly after the masses released their lanterns. The lantern-release was without a doubt one of the most beautiful things I'd ever seen - definitely in my top five most magical experiences.  Below you can watch a video I took of the event, and see for yourself how amazing it was.

I think it’s the first man-made spectacle to leave me breathless, so it holds its place in my memory among beautiful sunsets and sunrises, outlooks from mountain peaks, and the Milky Way itself. The lanterns themselves symbolize the joy accompanying Buddha’s birthday. It was mesmerizing to say the least. It was romantic, it was hopeful, it was somber, it was respectful, and it was joyous. Above us, lanterns amassed and moved synchronously with the breeze. We all watched until they became glittery stars themselves.

I can’t recommend this experience more. If you’re in any country that commemorates Lord Buddha with lanterns, attending the event is a must!