Yeonnam-dong used to be old and run down, but the government has invested a lot of money in this area over the years and it has allowed this area to grow. It is here where you can see new businesses and old businesses merge together. Boutique restaurants and cafes run along both sides of the park while its alleys snake its way to old Korean homes and businesses. 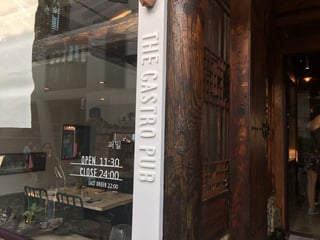 Literally outside of Hongik University Station (Subway Green Line #2; exit 5) you will find an open area filled with people. I had never known about this spot, and I’ve only seen it when taking my long late night taxi ride homes from Hongdae. However, after exploring this area I found it to be pretty amazing. My discovery of this area was because a group of friends were invited to a grand opening of a restaurant nearby. One of the culinary trends that has been picking up is Korean-Italian fusion cuisine. At the gastro pub, customers can dine on Italian inspired food with Korean twists under a traditional Korean house (hanok). The food was delicious and they can expect my business again in the near future! 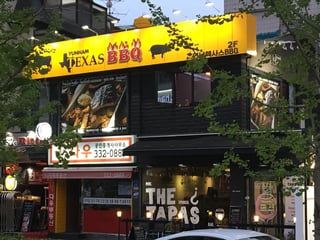 One of the best parts about Yeonnam-dong is that there are so many restaurants in the area. You can pick from steak and fries, Mexican food, Spanish tapas, Texas style BBQ, Vietnamese Bahn-mi sandwiches, and more. I love to do food expeditions with my friends and this is an area I would be willing to take an hour train ride to get to. But this place isn’t just known for its food. There is a small store that sells craft beers and some different stronger alcohols I had never seen before. My friends decided it would be a good idea to grab a beer and go out for a walk. If you want to just sit and relax, there are a lot of great drinking pubs in this area as well. One of the pubs that was poppin’ was Dumb and Dumber. Good music and good drinks can go a long way during these summer nights. 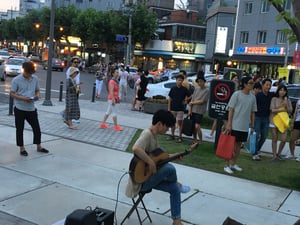 Another thing that people were doing was having their own picnic in the park. The park in Yeonnam-dong is not big, but it is very long. It was easy to see couples in their matching outfits, people walking their dogs, and friends sitting on large blankets enjoying the summer breeze. It reminded me of the days that I would go out to the Han River and do this with my friends. But this park was a little bit better because all of the restaurants that were nearby and there were not as many mosquitoes! At the end of the park, you see crowds of people listening to ‘buskers’ sing Korean, English and Italian music. 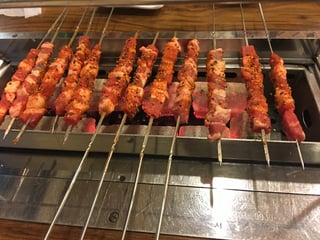 If you walk to the end of the park and into the apartment complex areas, take a right and head towards the main streets, you will see some of Korea’s best Thai, Vietnamese, and Chinese restaurants. This area is  also home to many Chinese people as well as a Chinese language school. Yeonnam-dong is famous for a traditional Chinese dish of grilled lamb skewers and there are many restaurants that cater this type of cuisine. As we entered one of these restaurants, we could hear Korean, English, Chinese, and even Russian customers there. We grabbed some skewers, got some of sweet-and-sour style pork, and a couple bottles of the Chinese beer Tsingtao.

I now understand why my friend’s Korean teacher told her that Yeonnam-dong is the new ‘it’ spot, saying it was great for couples. However, I disagree. This place is great for anyone who wants to come out, eat some good food and have a few drinks with your friends.