Wisdom teeth growth was one of those things that I always braced for but eased up on as I got deeper into my twenties. I thought, if I’ve made it this far without them showing up on an X-ray, I clearly am one of the chosen ones that would never have to deal with it. I cruised through early adulthood very much like an early adult, without any health or dental insurance to accompany me as I made very early adult decisions. But last year, after years of working odd jobs without insurance and a cocktail of natural, ayurvedic, and eastern healing techniques I found on google, I knew time was ticking to get my teeth checked. When I got to the office, the dentist told me I had not one, not two, but four wisdom teeth growing in. This especially irritated me because I barely have room for all my adult teeth, and now these nuggets were here to sabotage my WikiHow’d wellness retreat for one. Because I hadn’t had stable income for a while, I wasn’t covered on insurance in California before my move. So when the costs rang up, I was bound to pay hundreds of dollars, and not only that, but it would take a while to secure an affordable dentist because the offices are all so busy. So I decided to wait here, and I am so glad I did.

The first month living here can be tough, because you are basically a face without a name in the forms of bank cards, identification, and cell phone plan. But what’s great is that once I got that pretty blue Alien Registration Card, it linked promptly to national health insurance. After months of swearing that my wisdom teeth were crashing into my mouth by the minute, I finally went to the dentist to sort it all out, and it was unbelievable how smooth the process was. My best friend was recommended Ipsagwi Dental Clinic in Sinchon, right by Yonsei University, so we had appointments together. Nothing to bring loved ones closer than violently splitting your gums open! At first sight, I was impressed with the office, as it was quick, professional, and tidy. (But I haven’t had experiences other than such in South Korea, which is a testament to the well-oiled machine that healthcare is.) We put in our names on the check-in monitors and took a seat. Luckily, my best friend is Korean so she was able to translate everything, but the receptionists and assistants were speaking to me very fluently, so if I went alone, I would’ve been okay with my slapdash (but work in progress) Korean. 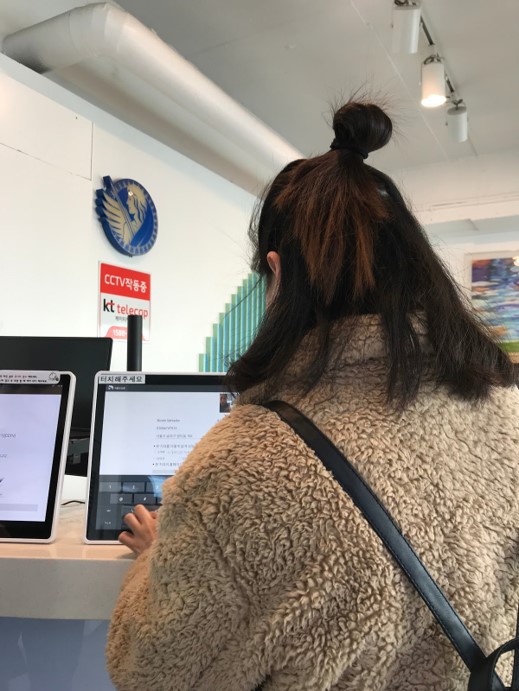 We were escorted to dental chairs to have X-Rays, and because my teeth were still deep below the gums, they had me do an additional cat scan, which cost an additional 20,000 KRW. They recommended that I only take one tooth out out of the four, and that I actually really needed to take two out total. That was so comforting to hear the dentist’s recommendations rather than those of so many dentists in the US wanting you to walk out with a root canal, teeth whitening, and a contract for invisalign each time you just want a check-up. The whole process of examination to plan of action took about twenty minutes, and I saw so many other patients glide in and out like clockwork. 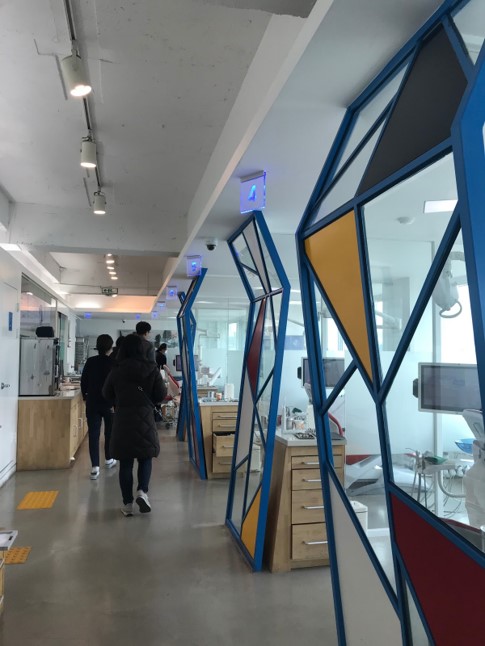 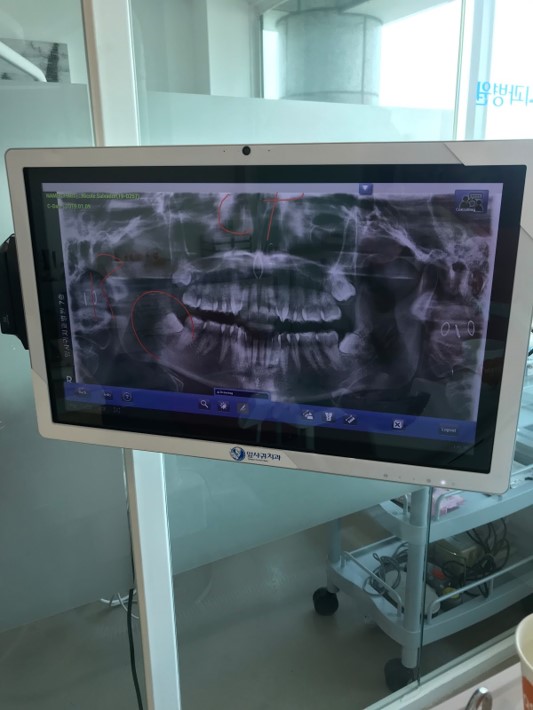 First, they put a local anasthetic and let it kick in for about twenty minutes. This was quite enjoyable because the office is on the eighth floor of a building that faces the sprawling mountains, flooding with neon restaurant signs, giant apartment complexes, and dotted with various sports fields. Then was the hard part. 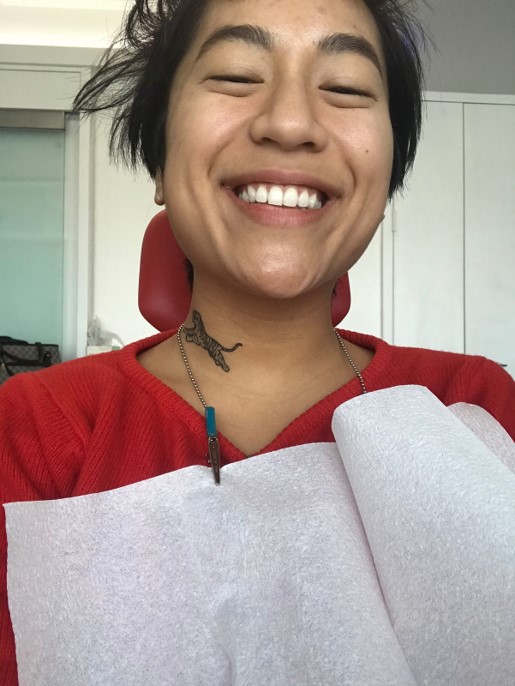 I was very surprised to learn that they wouldn’t put me under, which I was slightly disappointed about since I wanted to get a loopy, drooly video out of it. But since the anaesthetic was local, it meant that the recovery process would be much speedier than that in the states. But that being said, that also meant that you feel it more. And felt it I most certainly did. The dentist was very kind and soothing, but regardless he was still Nutribullet’ing my mouth. I have a high pain tolerance, but the score of Sweeney Todd still played in the background of my mind as I blacked out. Just kidding. I didn’t black out, but I definitely felt A LOT. They told me to raise my hand if I felt too much pressure, and after many seconds of resistance, I flung it up. Since the tooth was submerged in my gum, they first split it in two before they were able to yank it out. I want to be honest and say it was very painful, but not excruciatingly so. 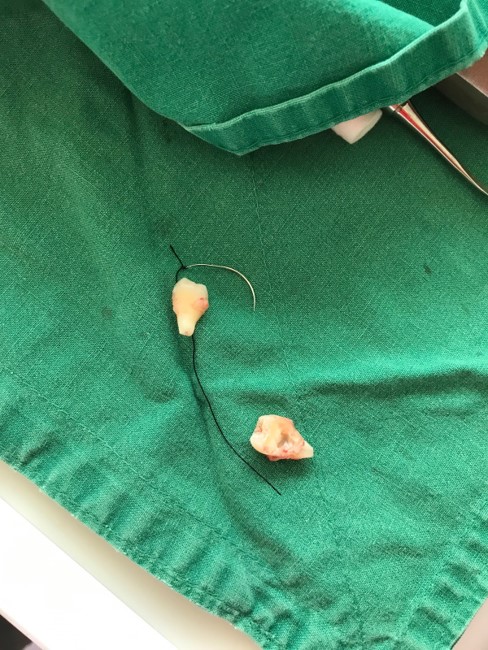 Afterwards, they gave me a cold pack to put on my face for swelling, and a prescription to pick up at a nearby hospital. On the way out, they gave my best friend and I little souvenirs including a tall stack of cold packs and a mini-calendar, which was perfect to write all the year’s resolutions I’ve yet to implement. They also gave us gauze because we would expect bleeding for four to six hours, so we hopped back on Line 2, sat in silence for forty-five minutes, and then both went home. 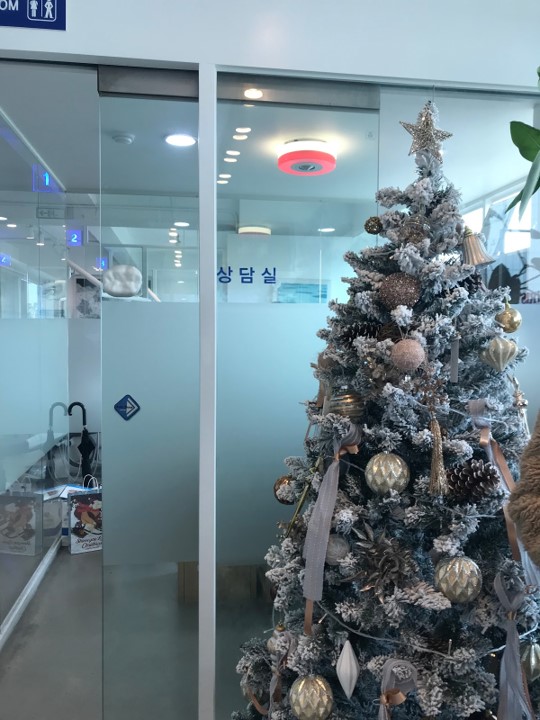 So here are things you should know about wisdom tooth extraction at Ipsagwi. It is much cheaper to do here than in the US, and the total cost ended up being 70,000 KRW because of the additional cat scan. The painkillers they gave me to use twice a day for three days were less than 9,000 KRW.

You may experience sore throat for a while after. Since your lymph nodes are swollen, it’s a big pain. I kept swallowing and regretting it, so have something handy to sooth your throat like honey.

They said the bleeding would subside in six hours, but mine lasted the entirety of the day into the next morning. Have lots of gauze handy. But I ran out and found that any cotton pads will also do the trick.

Have mouthwash at the ready. You should have it anyways, but especially post-surgery because it’s painful to brush your teeth.

Prep your meals beforehand! The painkillers make you really tired, and eating does hurt for a while. I couldn’t eat tteokboki for about a week and a half, which is truly the biggest tragedy of all. Buy ice cream beforehand, mash some potatoes, make daily, if not twice daily, runs to Juicy. I won’t judge. 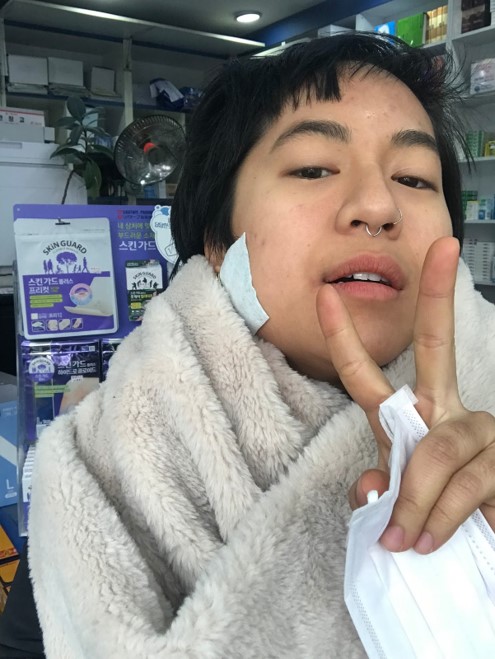 It took about two weeks for me to feel almost back to normal, and three weeks to eat all the crunchy things I love. About a month and a half later, I am very pleased with the healing and condition of my mouth. I am even more pleased with how the process went, with the kindness and expertise of everyone involved. I’m aiming to get my second tooth extracted in the next month, so I’m stocking up the soft snacks and the Netflix queue, and am ready to be on the continual ascent into health that living here makes so easy.